Shades of grey on open seas 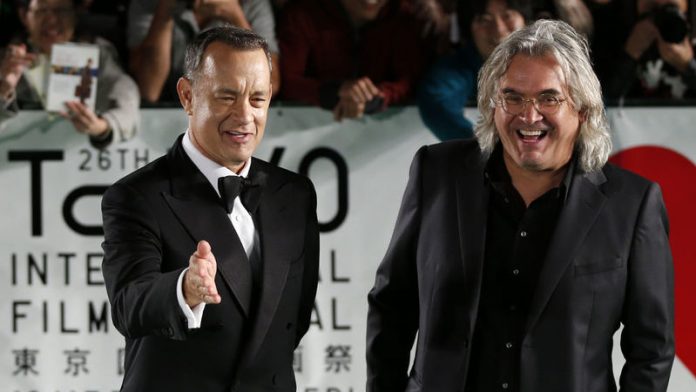 Captain Phillips is an unbearably tense hijack thriller from Paul Greengrass that is based on a true story about a Somali pirate attack on an American container ship in 2009.

Like Greengrass's 9/11 film United 93 (2006) and his Northern Ireland drama Bloody Sunday (2002), this film is about a catastrophe that is the surface symptom of bigger economic and political factors.

Tom Hanks is merchant marine Captain Richard Phillips, who is ­taking an American container vessel on a hazardous 10-day journey around the Horn of Africa and into bandit territory. Meanwhile, a Somali fisher­man called Muse, played by Barkhad Abdi, is part of a community terrorised by a local warlord. He has no choice but to obey when this baron orders him and others out on a hijack expedition.

Just as in United 93, the heart-sinking premonition of danger comes with a radar bleep: two green dots coming towards Phillips's big, placid ship far too quickly. The contrast is plain: on one side the huge, lumbering ship; on the other, the fast, manoeuvrable little skiffs. One is weighed down with possessions, the others have none.

In centuries gone by, piracy or privateering was the prerogative of rich nations seeking warlike advantage as sea-trading routes opened up. In the 21st century it is different, and when Muse finds that gigantic, ill-defended craft it is like Ishmael seeing the whale in Moby Dick. Captain Phillips is his big prize.

This is a quasi-war movie set in peacetime: in some ways, a post-9/11 film, perhaps specifically a salve to the memory of the USS Cole in 2000.

The United States fights back, but against a new enemy. Globalisation and poverty are incubating these attacks. All civilian shipping can do is wait for the next assault.

Individualistic values, reflected in everything from the the prosperity gospel and capitalism to social media influencers, may be overcome when we emerge from the Covid-19 pandemic
Read more
Africa

Q&A with Tom Hanks: In defence of fairness

Tom Hanks speaks about his role as a lawyer who has to defend a KGB spy during the cold war years.
Read more
Friday

The makers of "Long Walk to Freedom" have made a highly watchable film of Nelson Mandela's life story while remaining faithful to the facts.
Read more
Friday

Movie of the week: Finding The One, again

Elaine Benes meets Tony Soprano in a smart movie titled "Enough Said", about the truimph of being in love while middle aged.
Read more
Friday

Steve Jobs died two years ago this month. They should have waited a few more years before releasing Jobs.
Read more
Advertising