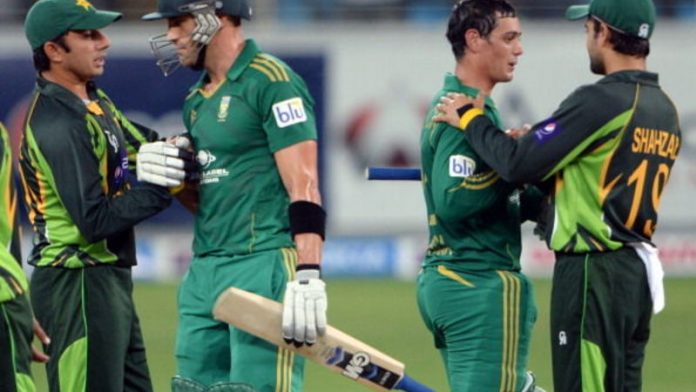 South Africa outclassed Pakistan in the first Twenty20 international in Dubai on Wednesday to go 1-0 up in the two-match series.

Dale Steyn took 3 -15 in his four hostile overs as Pakistan were restricted to 98-9 – their lowest Twenty20 total against South Africa – after they won the toss and opted to bat.

South Africa easily reached the target in 14.3 overs with opener Quinton de Kock hitting a 38-ball 48 not out, while skipper Faf du Plessis made an unbeaten 37 knocking off the runs without being troubled by Pakistan's spin-packed attack.

The second and final Twenty20 will also be played in Dubai on Friday.

De Kock hit three boundaries and two sixes off 38 balls while Du Plessis hit four boundaries and a six off 40 deliveries as South Africa made short work of their opponents.

Du Plessis was impressed with how his bowlers had set up the victory.

"It was a pretty good game and that's how you want to start the series by breaking their back initially.

"The wicket was quite dry and our bowlers have been putting their batsmen under pressure.

"I wasn't too surprised by their selection but seeing [Shahid] Afridi at three was a surprise against the new ball."

"I personally feel that we couldn't set up the total we wanted to, the early wickets did the damage and the South Africa bowlers really bowled to their plans," said Hafeez who failed to score.

"Our batsmen are not taking the responsibility which individuals have to in a team and that's a concern."

Defeat
Pakistan's batsmen once again failed to fire just as they did in the 4-1 one day international series defeat.

Umar Akmal with a 41 – ball 49 was the only batsman to put up any resistance in an otherwise chaotic batting display in which four batsmen failed to score after Pakistan won the toss and decided to bat.

Umar added 29 for the sixth wicket with Abdul Razzaq who made 10, before finally getting run out.

He hit four boundaries and a six.

Pakistan's previous lowest T20 total against South Africa was 119 which they made at Abu Dhabi in 2010. ?– AFP