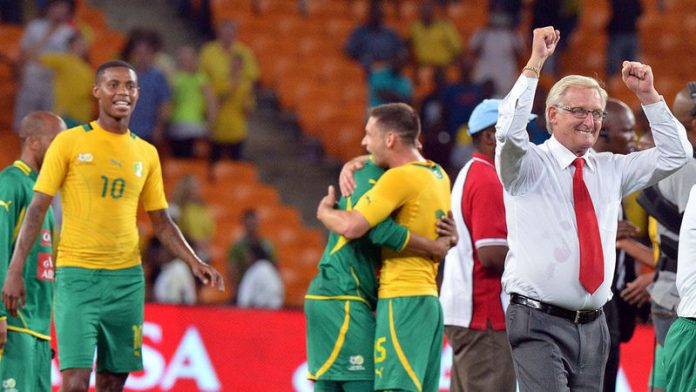 Parker coolly finished off a flowing move by the home side, as Spain were brushed aside and had no reply in front of a boisterous home crowd, which was tremendous throughout and willed Bafana to a historic victory in Johannesburg.

The home side started with a high defensive line, which caught Spain in several offside calls.

In attack, Bafana were made to work to get hold of the ball but South Africa would soon threaten the Spanish defence.

Fernando Llorente should have done better when he rose above Bafana defender Bongani Khumalo and put his header wide of target. Daylon Claasen went on to put his effort high and wide of the mark.

Second-half replacement Siphiwe Tshabalala did well in the middle to slide a dangerous ball to Rantie, who snuck behind the Spanish back row, but the burly forward was unable to test Casillas and the ball sailed high and wide of goal.

Bafana grew in confidence and before the hour mark, a superb link-up on the edge of Spain's area led to Parker's equally brilliant chip over half-time substitute goalkeeper Victor Valdés as the hosts sparked pandemonium at the stadium.

Rantie's darting run along the left flank allowed South Africa to hit Spain at the heart of their defence, as Parker danced his way through and toed his effort over Valdés, who watched as Nacho Monreal tried in vain to keep out the ball, which snuck over the line and into the back of the net.

Álvaro Negredo was one of the few who tested Itumeleng Khune in the second half, but nevertheless, the South African shot-stopper was equal to the task when called upon in the 70th minute, making a simple save to keep Bafana's lead intact.

Furious contests by Igesund
Spain had made a seventh change – Fifa rules clearly state a maximum of six replacements are allowed in a match – replacing goalkeeper Valdés with Pepe Reina.

The change sparked furious contests by Igesund, who was alert to the additional substitution being made, leaving both coaches and technical staff embroiled in a fracas on the touchline.

Igesund's troops took it in their stride and had an excellent chance to double their lead go to waste, after Rantie – who was through on goal and had only Reina to beat – drove his shot straight into the former Liverpool keeper.

Khune was unbeatable and pulled off a number of nervy saves as the clock wound down, to hand South Africa their first victory over Spain in four attempts, having lost on all three previous occasions. – Sapa