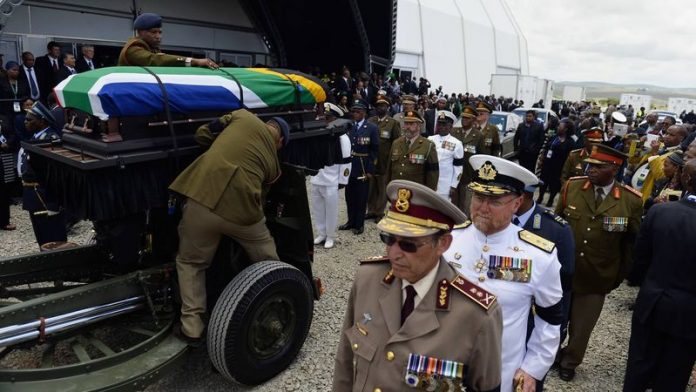 Former president Nelson Mandela was returned to his home village of Qunu on Sunday in a state funeral that saw political tributes and tears flow.

The farewell by the country and fellow African leaders was a reluctant one.

"We did not want to confront the reality of your mortality," President Jacob Zuma said in a eulogy that tried to address doubts about the country's current leadership voiced in the wake of Mandela's death.

"Thank you. Thank you for being everything we needed and wanted in a leader during a difficult period in our lives… for building a free South Africa," Zuma told the estimated 4 500 mourners in Qunu.

Zuma said an outpouring of grief across South Africa in the past 10 days was the nation's natural response to the goodness Mandela had radiated.

"As your journey ends today, ours must continue in earnest. One thing we can assure you of today, Tata, as you take your final steps, is that South Africa will continue to rise," he said.

"We plan to take your vision forward."

The mourners gathered early for the funeral in a marquee on Mandela's family farm, awaiting Mandela's casket that was carried through green countryside in a military procession and placed on cowhides.

Former president Thabo Mbeki was brought to tears as Kikwete recalled anecdotes of ANC leaders' days in exile in Dar-es-Salaam, including how Mandela left behind boots that languished in the capital for three decades after he was jailed by the apartheid regime.

"Women across South Africa have told me these past 10 days that they are very proud of you and what you have taught us as African women."

After she spoke, there was laughter when ANC deputy president Cyril Ramaphosa teasingly said she was from "Malawi. Yes, Malawi" — a reference to a recent faux pas by Zuma when he lamented the poor state of roads in that country.

'I do not know who to turn to'

Members of Mandela's family spoke at the service, but the most heart-rending tribute came from his close friend and fellow Robben Island prisoner Ahmed Kathrada, who spoke of being bereft after losing the man he considered a brother.

"My life is in a void and I do not know who to turn to.

"He was my elder brother," Kathrada said, adding that Mandela had shown love and tolerance in abundance, and that the outpouring of grief over his death had shown how connected South Africans felt to him.

"Today, mingled with our grief is the enormous pride that one of us has, during his lifetime and now, in your death, united the people of South Africa and the entire world on a scale never seen in history."

Mandela's casket was carried from the funeral tent just past noon to be buried in the family gravesite — in keeping with Xhosa custom that dictates that the dead are laid to rest when the sun is at it highest.

Zuma, Mbeki and past and present Cabinet ministers followed on foot.

Mandela was to be buried beside his parents and his son in the family graveyard at a ceremony that would gather only 450 mourners and be presided over by Methodist church general secretary Vuyani Nyobole.

Anglican Archbishop Emeritus Desmond Tutu attended in a last-minute change of heart after saying on Saturday he had cancelled plans to go to Qunu after finding he had not been invited.

Faced with the wrath of one of Mandela's close friends and allies, the ANC dismissed the imbroglio as a misunderstanding and insisted that he was welcome.

It had caused speculation that Tutu had been sidelined because of his caustic criticism of the current government.

All indications were that grudges had been firmly set aside for Mandela's funeral, as senior ANC members who have fallen foul of Zuma attended — among them former Cabinet minister Tokyo Sexwale.

Ramaphosa appealed that those not on the list of 450 people not to go to the site.

"This is being done because there isn't sufficient space … nobody should ever feel excluded or undermined."

Those attending the burial would be Mandela family members. They would be accompanied by the military command, Defence Minister Nosiviwe Mapisa-Nqakula, her deputy, and pall-bearers.

Former and current heads of state, deputy heads of state and first ladies would accompany Zuma to the burial. African Union chairman and Ethiopia's Prime Minister Hailemariam Desalegn would also attend, along with 15 traditional leaders and 15 religious leaders.

Businessman Richard Branson would also be allowed to attend the burial. – Sapa