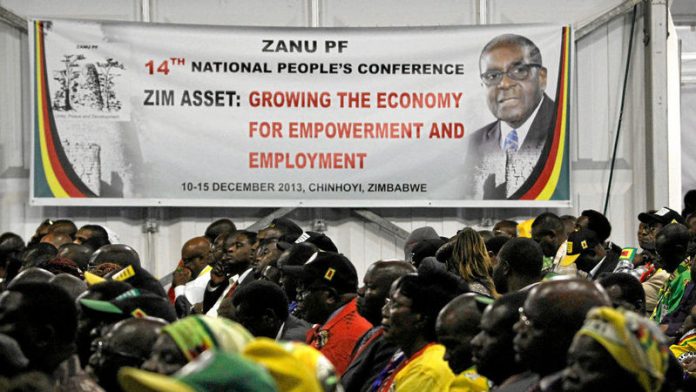 Zanu-PF has delivered tremendous wealth to its top officials, but the party itself claims that it is deeply in debt and its business interests are close to collapse.

The party is in such dire straits it even had to rely on a donation from President Robert Mugabe to print election campaign material.

According to an internal report by the party's central committee, Zanu-PF's expenditure over the past year stood at $9-million against an income of $4.4-million. The party's liabilities "include a bank loan, accruals from telephone usage and outstanding creditors incurred during the harmonised elections totalling $5.8-million".

"The trend of insignificant cash inflows continues due to a number of factors, hinged generally on the overall poor performance of the economy," the report says. "As a result, our traditional sources of revenue, namely subscriptions, membership fees and donations, are severely affected."

The report confirms speculation ahead of the July 31 polls that Mugabe himself had funded much of the election campaign.

"The party, through the generous intervention of the President … printed and distributed regalia and other items during the campaign." About $1.7-million was spent on this year's election campaign, and $420 000 went to legal fees to fight petitions filed by the opposition party contesting the poll results.

The party made a provision of $2.6-million for its conference last weekend.

Secret 'well-wishers'
Bank and interest charges, mostly relating to its overdrafts, stand at $701 721. The party owes $124 194 in telephone and internet bills, which stretch back "from previous years", the report says. Membership fees raked in $180 831, but the biggest earnings came from a $1.19-million government grant and $3-million from secret "well-wishers".

"M&S Syndicate continues to struggle to meet its obligations, considering that only two [party-owned] companies pay dividends. The other companies are either just breaking even or actually threatening to bring down the whole business unit due to a debt overburden," the report says.

The party is known to hold commercial interests that range from home appliances manufacturer Tregers to airline catering firm Catercraft, which it runs in partnership with long-time Omani ally Kamal Khalfan.

Zanu-PF also owns Jongwe Printers and several duty-free shops, including some at Harare International Airport. Through a maze of shelf companies, Zanu-PF is also invested on the Zimbabwe Stock Exchange, where it holds stock in banks, insurers and other entities.

But the party says its business interests are making huge losses for reasons ranging from antiquated machinery to sanctions-related problems.

The party is looking for new investors to inject fresh capital, and "there is a new surge in local and foreign companies waiting to do business with the party", the report claims.

Zanu-PF plans to open new businesses in the construction and mining industries. It is also seeking investments in power generation, a sector in which dozens of private foreign and local investors are looking for opportunities.

Milking it
But though the party itself is bleeding, Zanu-PF admits that its own officials are milking it. According to the report, "pilfering had reached alarming levels" among its top officials, who are grabbing money from drought relief and stealing from Mugabe's own welfare programmes.

"Corruption was said to be rife within the party as there were reports of officials helping themselves to party food relief packages, the grain loan scheme and the president's well-wishers input schemes at the expense of the intended beneficiaries," the report says.

There was, however, no real action being taken against corrupt officials. There is a "serious breakdown of discipline, along with a sense of impunity within the party".

Although rich members are looting, "a considerable number of party cadres are reeling in poverty", the report says.

The party continues to blame sanctions and sabotage for the stagnating economy, but the internal report is more candid in its assessment: "Unless and until the economic situation improves and economic production is raised, the plight of labour will continue," the report says, in a section lamenting job losses.

Zanu-PF's economic affairs department has revealed that it is worried about the cash shortages that have hit smaller banks in recent weeks.

"The liquidity cash trap currently prevailing is of great concern and it is the department's view that the matter is real and needs immediate steps to rectify it," the report says.