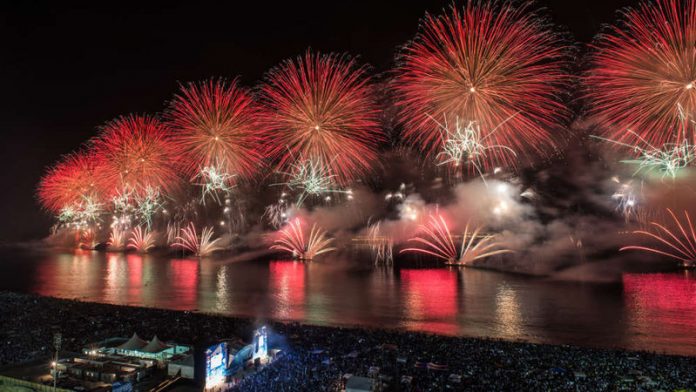 South Africa's top tourist drawcard Cape Town bid farewell to 2013 with a 3D video send-off of Nelson Mandela as the nation entered the new year without its beloved icon.

Mandela's face was briefly mapped onto the city hall in Cape Town where he gave his first freedom speech in 1990 after his release from 27 years in apartheid prison. The tribute, featured a recording of Mandela calling for peace and friendship, was screened just before the countdown into midnight which was marked with a fireworks show.

It was part of a free party featuring singers and DJs on the public square opposite city hall where the crowd also replicated Mandela's trademark arm waving dance known as the "Madiba jive".

South Africa's first democractically elected leader died aged 95 on December 5, triggering a massive reaction at home and around the world.

In New York, crowds gathered in Times Square for the annual New Year's Eve street party. By midnight, some one million people were expected to be on hand for Miley Cyrus, Melissa Etheridge and hip-hop artists Macklemore & Ryan Lewis and the dropping of the crystal-encrusted ball marking the start of the new year. "We've been living on granola bars and little bottles of water because if you move, you lose your spot," said Sheila Harshbarger, who travelled to New York from Indiana with her daughter and staked out ground next to a row of police barricades in the freezing cold more than 14 hours before midnight.

In outer space, Nasa astronauts will help ring in the new year by sending greetings to the Times Square crowd. Astronaut Mike Massimino brought a message from crew members on board the International Space Station orbiting the globe in a video display from space visible to those waiting for the ball drop.

There will be no crystal ball for Brasstown, in the mountains of North Carolina. At midnight it held its 20th New Year's Eve "possum drop" – in which a caged opossum is displayed in a Plexiglas container for spectators. "If New York can drop a ball … then we can lower the opossum," organisers explained on their website. The event got a last-minute go-ahead after a judge refused a plea by animal-rights group People for the Ethical Treatment of Animals to stop the event.

Banana-flavoured confetti
In other parts of the world, festivities were well under way. At midnight in Sydney, Australia, a massive fireworks display lit up the sky around the city's famed Harbour Bridge and Opera House.

In London, edible banana confetti and strawberry mist was set to rain from the sky as a fireworks display along the River Thames lights up Big Ben and other landmarks.

Around 50 000 people took part in what was dubbed the "world's first multi-sensory fireworks display", poking their tongues out to catch the flavours designed to match the colours on show.

Bubbles of orange-scented smoke and apple and cherry mist were released into the air as the 11-minute firework salvo lit up the London Eye observation wheel.

Across the United States, 2014 will also usher in political changes and the official start of a slate of new laws. Americans who have signed up for new health-care coverage under President Barack Obama's Affordable Care Act are expected to begin receiving benefits on January 1.

In Colorado, a new law will allow state residents to buy an ounce of marijuana at a time from specially regulated retailers. Possession, cultivation and private personal consumption of marijuana by adults has already been legal in Colorado for more than a year. "It will be like people waiting in line for tickets to a Pink Floyd concert," said Justin Jones (39), owner of Dank Colorado in Denver, who has run a medical marijuana shop for four years and now has a recreational pot license. – Reuters, Sapa-AFP

Earth Hour and a life in ruins

Ushering in 2014: Cities prepare to party