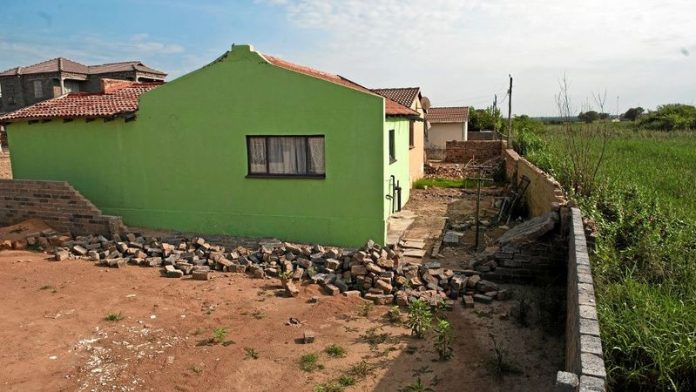 On a hot summer's morning the week before Christmas last year, Dinky Boikanyo woke up to find her car floating around her yard.

"It became a ship," she jokes, while standing amid the rubble of the wall she had built to keep out water from the Soutpanspruit River. Like her neighbours, she has many cellphone pictures of their flooded houses.

Her car – an Opel Corsa Lite – is now parked across the road, drying out. Block BB in Soshanguve, north of Pretoria, consisting mainly of two and three-bedroomed houses on small plots, was built in 1991.

One strip of houses on the edge of the suburb was built on the flood plain of the Soutpanspruit.

The houses on the other side of the street are on higher ground, but on Boikanyo's side at least 41 of the low-cost homes are flooded every December. Each householder tries different methods to keep the water out and when one scheme fails, they try another.

Exercise in futility
For David Sebesho building has been an exercise in futility since 1991, when he took out a bond to buy his three-bedroomed house. The developer, Gough Cooper Homes, is now based in KwaZulu-Natal and says on its website that it was "one of the pioneers who developed low-cost housing in townships during the 1980s".

But the company says all its records are with Group Five. There was no representative from Group Five available for comment at the time of going to print.

Sebesho says when he was shown the developers' plans, his house was going to be on the higher side of the road, with a park planned for where his house was eventually built.

But when construction finished and it was time to view his house, he was driven to another site further down the road by one of the developers – whom he knows only as "the white man", and who had a gun wedged between the seats – and told to get out of the car. "I said this was not my house. But he told me it was, and repeated that I should get out."

The developer struggled to find the right key from a large bunch, and drove away while Sebesho was viewing his new home for the first time.

Sebesho said none of his neighbours appeared to be living in the houses they had paid for. But, like them, he accepted his fate and made the best of his new home.

December floods
Six months later, in mid-December, and every year for the next 23 years, his home was flooded. "Imagine how much it costs us," he says, holding his young son on one arm. "Every year people are going to get loans to fix their homes and build new walls."

The houses along Main Street in Block BB share signs of seasonal water damage. The paint is flaking off and there are large cracks in the walls as they expand and contract. Some walls are no longer attached to one another.

Paul Molotsi says all that is left is for the walls of his house to collapse. (Delwyn Verasamy, M&G)

These houses are each worth about R350 000, so the owners are deemed too wealthy for any government assistance. After they moved in, the developer disappeared; there is no one to hold to account.

One resident says their ANC councillor, Emily Nkosi, told residents she was "not Queen Modjadji" – the Rain Queen – so she was not responsible.

Helpless
Nkosi told the Mail & Guardian this week she was working with the department of housing to "maybe find a solution", but because they were bond houses it was difficult for the municipality to help. Nkosi denied having made the Modjadji comment.

Each resident wants the M&G photographer to record their damaged property. They say they contacted the public protector in December 2012, but have not received any feedback.

With nowhere to turn, Sebesho says: "You have to do something to help us here; nobody else has." He has had seven neighbours in his 23 years here.

Paul Molotsi's two-bedroomed house is the worst affected in the row. He moved here in 1997 and did not notice any problems at first because he bought the house in winter and the river did not look threatening.

The house, like the rest, was carpeted and had a new coat of paint. But after the first flood he pulled the carpet up to dry and found hidden damage from previous floods. Sitting in his deep armchair, he stands up wearily to greet the visitors.

Molotsi is still paying off the bond, but has to spend money every year to fix water damage.

The interior walls are only one brick thick and are not anchored to the floor. There is now a thumb-thick crack under each of the walls, so the light from one room passes throughout the house. For the family of seven there is no privacy. "We are just waiting for the walls to fall on us," he says.

Flood wall
The family saved up to build a wall at the bottom of their yard – which fronts on to the flood plain – in 2006. This is more than 3m high and created a safe space for eldest daughter Lebogang to build a kennel last year for her dog and puppies. But their neighbour's wall was not strong enough and the floods came through there into the Molotsi yard.

The walls created a cauldron of seething water and she only just managed to save the puppies from the deluge – and from a 2m-long leguaan that washed into the yard.

Lizards are swept into yards along with snakes, rubbish and faeces. The stagnant water is perfect for mosquitoes to breed and, as the day heats up, the smell is pungent.

"Now we are only talking. Next time we will be crying because there will be a death," says resident Judas Rangane. He has small children and the house next to his is occupied by young orphans. "What do we do when it rains at midnight and we are sleeping? People will die."