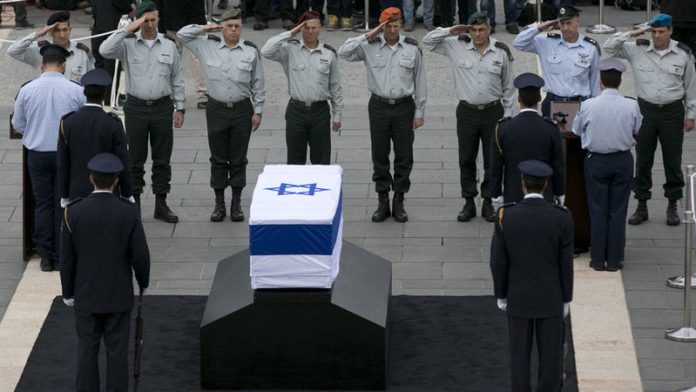 Israel paid homage to former prime minister Ariel Sharon at the first of two funeral services to be held on Monday for a man hailed as a war hero at home but seen by many in the Arab world as a war criminal.

US Vice-President Joe Biden joined the ceremony in front of the Israeli parliament, Sharon's coffin draped in the Israel's blue and white flag.

"We are accompanying to his final resting place today, a soldier, an exceptional soldier, a commander who knew how to win," said Israeli President Shimon Peres.

Sharon died at the age of 85 on Saturday after spending the last eight years in a coma caused by a massive stroke.

His death has reopened debate into his legacy, with foes denouncing his ruthless conduct in military operations while friends praised him as a strategic genius who had stunned the world in 2005 by pulling Israeli troops and settlers out of the Gaza Strip – a Palestinian territory in the south.

Beefy and brusque
"The security of his people was always Arik's unwavering mission – a non-breakable commitment to the future of Jews, whether 30 years or 300 years from now," Biden said, using Sharon's nickname.

After the memorial service at Parliament, Sharon's body will be driven from Jerusalem to his family farm some 10km from Gaza, where he will be buried later in the day.

Famously beefy and brusque, Sharon was also widely disliked by Arabs for what some regarded as harsh and aggressive policies, including a 1982 invasion of Lebanon in a bid to stamp out Palestinian guerrillas as well as military crackdowns and settlement-building in occupied territories.

He was forced to stand down as defence minister in 1983 after an Israeli probe said he bore "personal responsibility" for not preventing the massacre of hundreds of Palestinian civilians in the Lebanese refugee camps of Sabra and Shatila by Israeli-allied Christian militiamen.

Written off at the time, he soon bounced back and served as prime minister from 2001 until his stroke.

"Arik understood that in matters of our existence and security, we must stand firm. We are sticking to these principles," Netanyahu said.

Israel has beefed up security for Sharon's burial and warned Gaza's Islamist rulers not to allow rocket fire during the ceremony, which Biden is also due to attend.

An Israeli security source said Israel had "passed the message" to Gazan authorities to prevent any rocket fire during the ceremony at the farm. Gaza is governed by Hamas Islamists who fought several times with Israel over the past few years.

"It was made clear to them that … it would be a very bad day for anyone there to test Israel's patience," said the source, who spoke on condition of anonymity.

A Reuters correspondent heard two explosions in northern Gaza on Monday morning, which sounded like rocket impacts. An Israeli military spokesperson said there had been no launches across the border. Israeli media said the blasts appeared to have resulted from Palestinian militants testing their weapons.

Fruitless diplomatic efforts
Security sources said Israel had deployed an Iron Dome rocket interceptor near Sharon's Sycamore Farm, which has been hit by Gaza-launched rockets in the past.

How to handle Gaza is among the sticking points in Israel's US-sponsored peace negotiations with Palestinian President Mahmoud Abbas, Hamas's rival based in the occupied West Bank.

During his brief visit to Israel, Biden will discuss the so far fruitless diplomatic efforts with Netanyahu and Peres, US officials said.

US President Barack Obama, who took office in 2009 and made his first presidential visit to Israel last year, did not come. The only trip of his presidency to pay his respects to a foreign leader was last month, when he attended a memorial service in South Africa for former president Nelson Mandela.

Sharon and Peres are the last of the so-called 1948-generation of leaders who played a part in Israeli public life from the very foundation of the nation.

Sharon spearheaded military campaigns in several wars with the Arab world, expanded Jewish settlement-building on land the Palestinians want for a state, and then, as prime minister, made the shock decision to withdraw from Gaza in 2005. – Reuters

Crispian Balmer
Crispian Balmer works from Rome. Reuters' chief correspondent, Italy, based in Rome. Previously in Jerusalem, Paris, Milan and Madrid. Comments are my own, not Reuters etc etc. Crispian Balmer has over 4856 followers on Twitter.