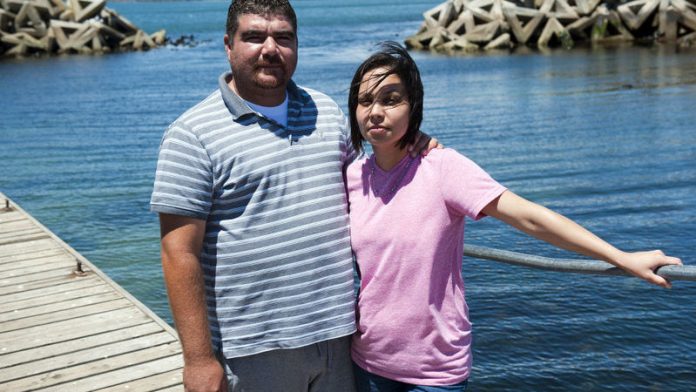 Roland Wichman of the impoverished Hangberg community in Hout Bay is delighted that line fishermen who lost their commercial fishing licences are seeking an urgent court interdict against the department of agriculture, forestry and fisheries over its rights allocation process.

Speaking to the Mail & Guardian from a boat at sea, the fourth generation fisherman said he had still not received a scoresheet from the fisheries branch to explain why his own permit application was turned down. Wichman said his family were fishing snoek, yellowtail and hottentot for generations, and he was hoping the department's decision on the allocation of permits would be reviewed and set aside.

"All I got was a letter from fisheries saying my application was unsuccessful, and I have not received my scoresheet. Other fishermen have not even received notification they were unsuccessful. I am back to sea as I got an exemption from the fisheries department to go out again until my appeal has been heard," said Wichman, who is concerned he will not be able to pay his children's school fees if his appeal is not successful.

Wichman said he did not know how the line fishermen were going to pay for the legal action, but they could not sit back and do nothing. Desperate line fishermen previously told the M&G they would have to resort to poaching if their appeals against the department were unsuccessful.

But the chair of the South African commercial linefish Association, Wally Croome, confirmed that on Tuesday a decision was made to turn to the courts for a review of the permit process.

"Each rights holder employs up to 10 crew members, who supply fresh fish to, among others, factories and scores of hawkers," said Croome. "Their crew and many hawkers will now have no source of income, creating a shortfall of reasonably priced fish traditionally sold to disadvantaged communities and generally escalating the price of fish across the board."

While the association supported transformation of the fishing industry, Croome said this did not mean it had to cripple a vital component of the system – the commercial fishermen.

False information
Croome said he would continue trying to work with the fisheries branch to try to work out a solution. Criticism that crew members of commercial fishermen were underpaid and exploited were "false", he claimed.

"I and many other commercial fishermen are happy to open our books to scrutiny. Perceptions created that crew were exploited were false," he said. "On average, we split our daily catch 50/50 with the crew. I know of no other sector that reimburses their employees with 50% of the turnover."

The investment in the boat, trailer, vehicle, fuel, levies, permits, insurances and most operating costs, were borne by the rights holder, said Croome. His association was now consulting lawyers about lodging a court interdict against the department imminently.

Of the 455 traditional line-fishing licences the fisheries branch issued in 2005, only 205 were confirmed in the new allocation handed down on December 31. A hundred of these licences were given to new, unknown entrants.

'Unlawfulness'
According to a legal specialist in the field, the scoresheets for fishermen who applied for fishing licences for tuna, squid and line fishing sent out by the department of fisheries, reveal a "blatant arbitrariness and unlawfulness of the process".

Shaheen Moolla, who was previously a legal adviser to former fisheries minister Valli Moosa, questioned the relevance of the various scores. Among his various criticisms of the process, Moolla said the scoring criteria failed to recognise and score key evaluation criteria.

"So local economic development and proximity to landing sites and coastal villages are simply not even considered. This would explain how applicants in Midrand and Cresta, Gauteng, scored fishing rights, while fourth generation line fishers in Arniston, Struisbaai and Kalkbay were excluded," said Moolla in his online blog … Also not even considered and scored is the key criterion of investment in fishing gear and vessels. How can such a critical aspect of eight years of past right-holding be completely ignored? These two failures easily render the evaluation criteria as being irrational and an unlawful failure to take into consideration proper criteria."

The deputy director general of the fisheries department, Desmond Stevens, could not be reached for comment on the proposed court action. In an interview with the M&G earlier this month, he claimed he was advised by the same law experts who allocated the linefishing licences in 2005, and said there had been no irregularities in the process. The fisheries branch would investigate the case of licences going to Solomons and the skipper of one of its patrol boats, he said.

During the interview with the M&G, Stevens located Wichman's scoresheet on his computer system, and said he was not a good example of someone who should have received his line fishing licence as he underperformed.

The question now remains why, as Wichman's scoresheet was readily available on the department's sytem for Stevens to view, the fisherman still has not received his scoresheet in the post.

A former commander of Umkhonto weSizwe, Stevens has come under fire from Moolla, who claims he is unqualified for the department's acting deputy director position, a job that was advertised last year.

SA at sea over illegal fishing in its waters

The new app - known as Abalobi - signals a lifeline for fisherfolk who were marginalised and never had legal rights to fish marine resources.
Read more
Environment

Fisheries department will call on police to deal with corruption

Minister Tina Joemat-Pettersson says she will call in the police if an internal probe reveals corrupt activity within the department.
Read more
National