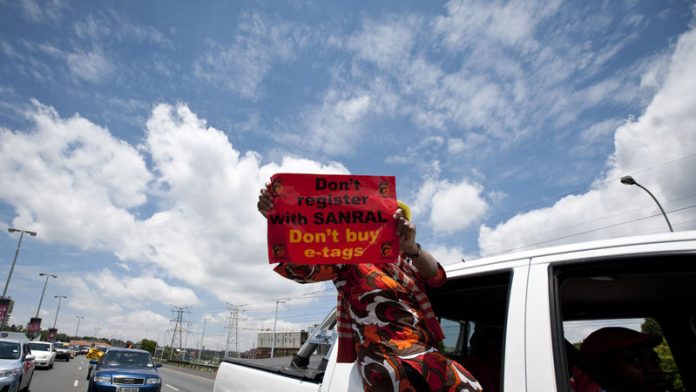 "In theory there shouldn't be a difference between theory and practice. However in practice there always is." – Yogi Berra.

Take the so-called Intelligent Transportation System (ITS), known as the Gauteng Open Road Tolling scheme. In theory, the plan was to ease traffic congestion to get people to and from work more punctually; to move goods between producer and consumer more efficiently; and reduce toxic vehicle emissions.

It was supposed to create a more productive urban economy, because investment would flow into public transport systems so that South Africa could show the world what an Intelligent Transport System should look like on the African continent.

The former mayor of Bogotá, Enrique Peñalosa, makes the issue of public transportation sound so simple in this short YouTube video.

The Colombian capital now measures its developmental progress by the ability of wealthy people to share safe, affordable and efficient public transport with the poor, rather than by enabling the poor to buy cars to pollute the air and congest the roads in traffic jams with the rich.

When he was elected as mayor, Peñalosa made a commitment to ensure transport systems served people and the planet and in so doing revolutionised urban life.

Blame game
By contrast, the Gauteng's Open Road Tolling Intelligent Transportation System (which renders the awful acronym Gortits) is showing all the signs of becoming an embarrassing fiasco.

The best Nazir Alli, head of South African National Roads Agency Limited (Sanral) can muster is to blame the problems on "those who have no respect for the rule of law". He says billing problems are the fault of problematic information databases.

Alli pledges: "But within time we will fix it".

How much time? Remember, he has had almost three bonus years to perfect e-tolls since the planned initial launch date of April 2011.

What makes the e-tolling fiasco so stupidly ironic is that e-tolling was supposed to become the definitive incarnation of the user pay principle. Yet now Sanral faces hundreds of thousands of users who won’t pay – on principle.

Over the course of the gruelling e-toll legal battle we have seen Sanral’s credit rating decline and traffic congestion worsen – a scenario far removed from the intended outcome.

"While Alli loudly claims to have been vindicated by the draft for M&G courts, all he has really achieved is firstly to persuade the Constitutional Court to underscore the doctrine of the Separation of Powers, and secondly to convince the Supreme Court of Appeal not to condone Outa’s late application.

"He failed to sustain a punitive costs order against Outa and failed to obtain a declaratory order on the substantive lawfulness of the 2008 declaration of the freeways as toll roads."

Alli claims to have been vindicated by the Supreme Court's dismissal of the Opposition to Urban Tolling Alliance (Outa) appeal in its e-toll challenge against Sanral. Outa believed e-tolling was illegal and unreasonable.

Yet in Gauteng we have Professor Marinus Weichers, who helped draft our Constitution, lamenting the infringement of citizens' right to movement by e-tolling. Users of the system were never given the opportunity to express their prior, free and informed consent to the limitation of that right at the outset, he says. Neither were they afforded more cost effective alternatives, such as occurred in Bogotá.

How could the intelligent people who developed e-tolling's technological, financial and legislative systems have been so stupid as to believe it could ever succeed by criminalising non-payment?

In a society still struggling with a crime problem that has shredded the social fabric, we cannot hope to reverse the steady drift towards civic anomie as long as the state antagonises and alienates decent responsible citizens by criminalising them.

The early warning signs were there when Minister of Transport Dipuo Peters dismissed criticism from the Justice and Peace Department of the South African Catholic Bishops Conference about the "extortion" of money from road users and the expatriation of capital to European shareholders.

They heightened when Sanral spokesperson Vusi Mona responded to my efforts to engage him by accusing the bishops of promoting xenophobia. He also repeatedly refused to engage with Outa chairperson Wayne Duvenage over the unbelievably false assertions he made about the number of e-tag registered.

Our own research found that only 15% of freeway users had done so by December 12 2013 – woefully short of the 85% threshold for systemic viability.

Human nature
This highly interlaced e-tolling system relies on road-users to behave in a specific manner to work ie. to register and pay up with consistent and predictable regularity.

Road users cannot be programmed to become unthinking robots. As every frustrated motorist in Gauteng already knows, government has great difficulty in keeping even the existing robots working!

Then Sanral went into self-deceiving mode by refusing to be interrogated publicly to account to users. Since the entire logic of the system hinges on motorists enrolling via the e-tag technology to ensure a steady stream of cash from their bank accounts into Sanral’s, we anticipated drastic measures to convince them to buy e-tags.

Sure enough, seven days after switch-on alarming complaints started coming through Outa's website of people having received threatening SMSs from the Violations Processing Centre warning them to pay up.

As both a parent and a social worker, I know there is a time and place for confrontation. However, a resolution is only likely if there is a pre-existing relationship of care and concern. And you need to be sure of the facts.

For people to suddenly receive threatening messages based on incorrect information from a nameless entity known as the Violations Processing Centre is an offensive violation. Such methods are hardly compatible with the values of the Constitution which obliges respect for human dignity and affirms freedom.

Sanral is alienating the very people upon whom it relies for its success: the e-toll users. Worse still, it has de-legitimised the proper use of confrontational communication.

To save time and enable the Public Protector to act quickly, Outa offered to collate and analyse complaints in order to gather hard evidence. This was a chance for the likes of Alli and Mona the opportunity to show themselves committed to the values and principles of the Constitution.

Instead, Mona responded by publicly insulting listeners on Talk Radio by telling them to "raise their IQ a little" when they receive threatening SMSs warning them to pay their e-tolls and contact Sanral's call centre.

I discern in his remark a telling psychological projection. Is it not the combined intelligence quotient of the Electronic Tolling Company and Sanral that is falling?

Nightmare
The Justice Project of SA has called for Mona’s resignation. Whether he leaves or stays, given that two senior executives from ETC have resigned in the past two months and given the steady stream of complaints coming to Outa (now in excess of 1 000), a nightmarish situation in the e-toll call centre and customer service centres is becoming evident.

This was even before the hoax anthrax attack that necessitated the evacuation of the e-toll operations centre twice last week.

I worked for the Independent Electoral Commission during the historic 1994 elections to train monitors and saw from the inside "a human triumph over an organisational nightmare" (the title of my evaluation report). The saboteurs of democracy were overcome.

Alas, the purpose of e-tolling is not as simple as a democratic election but something abstract and highly contested. No social contract was forged at the outset and therefore users do not feel obligated by a relationship of mutual accountability.

Yes, Nazir Alli may have amassed the power to force people to comply, but he will need authority to inspire them to co-operate. He has cashed whatever credibility and authority he once had a long time ago, and for want of widespread popular will to make sure it works, he has transmogrified an intelligent ideal into a stupid ordeal.