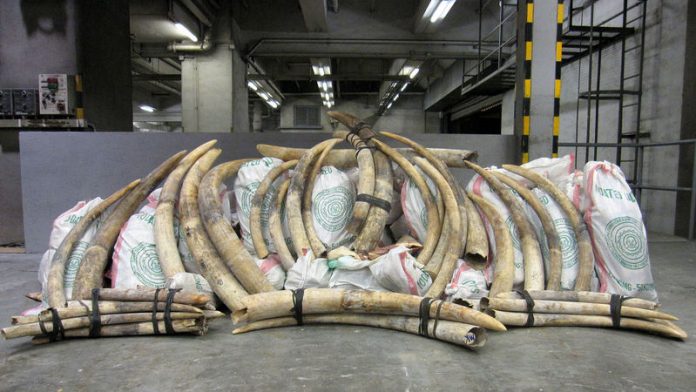 The UN Security Council has targeted illegal wildlife traffickers for sanctions in a pair of resolutions against African armed groups, a step conservationists called unprecedented and a major shift on a problem that has morphed from an environmental issue into a security threat.

A resolution that renewed an arms embargo, travel bans and asset freezes against armed groups in Congo included individuals who support those groups "through illicit trade of natural resources, including gold or wildlife as well as wildlife products". The Security Council approved the resolution Thursday, two days after including similar language in a sanctions regime imposed on armed groups in the Central African Republic (CAR).

Conservation group WWF said the resolutions "represent the first times that the UN Security Council has specifically named illicit trade of wildlife and wildlife products in sanctions regimes". The move follows years of warnings from advocates and UN officials that wildlife trafficking, particularly elephant ivory, has increasingly become a source of financing for armed groups.

"It's a huge step forward," said WWF species programme manager Wendy Elliott. Wildlife traffickers "are funding the armed groups that are causing the human rights violations, but it is still treated as an environmental issue and that is just not going to work out".

Wildlife exploitation
Britain, which will host a summit on illicit wildlife trafficking next month, applauded the Security Council for approving a "sanctions regime which includes targeting those who fuel instability by illegally exploiting wildlife".

"This provides us with another avenue to protect vulnerable species and cut off support to criminal and armed groups," said Iona Thomas, a British government spokesperson.

US ambassador Samantha Power said, "In recent years, wildlife trafficking has become a lucrative business and a source for conflict. So it's a sign of progress that the Security Council recognises the link between stopping poaching and advancing peace."

Thursday's Security Council resolution stressed the importance of preventing M23 rebels from regrouping in Congo. M23 launched a rebellion in April 2012, becoming the latest reincarnation of a Tutsi rebel group dissatisfied with the Congolese government.

Earlier this month, the top UN envoy in Congo said there were "credible reports" that the rebels were resuming activities despite its military defeat and a peace agreement with the Congolese government last month.

The Congo conflict is a spillover from the 1994 genocide in neighbouring Rwanda.

Heated argument
A heated argument erupted between Congo and Rwanda during the Security Council meeting, with their ambassadors trading insults over allegations that each country is supporting rival armed groups.

A UN experts report released last week said there was "credible information" that M23 rebels were recruiting inside Rwanda.

The Security Council resolution expressed concern about reports that Congolese soldiers are aiding the FDLR, another rebel group which was formed by extremist Hutus from Rwanda who took part in that country's 1994 genocide and then fled across the border.

In their report, the UN experts said the slaughter of elephants in Congo "is one of the most tragic consequences of years of war and poor governance."

The report says the Lord's Resistance Army (LRA) – which originated in Uganda and has waged one of Africa's most brutal rebellions – maintains bases in the park and has engaged in firefights with park rangers, including a shooting in May 2013 that left two girls dead.

The report says that another armed group, Mai Mai Morgan, is "infamous for poaching elephants in the Okapi Fauna Reserve", though its focus in 2013 shifted toward attacking gold mines.

In a report last year, UN secretary general Ban Ki-moon said there were signs that the illegal trade in elephant ivory constitutes an important source of funding for armed groups including the LRA, whose fighters moved into Congo, South Sudan and CAR after Ugandan troops flushed them out of the country.

Ban said some African governments are using the army as well as police and paramilitary forces to hunt down poachers. He said poachers are using more sophisticated and powerful weapons, including some that may have originated from the fallout of the uprising in Libya that ousted Moammar Gadhafi.

Asian market
Conservationists say a thriving ivory trade market in Asia is helping fuel the worst poaching epidemic of African elephants in decades. According to the WWF, more than 20 000 elephants are killed each year for their ivory tusks, many of them in Central Africa conflict zones.

Elliot said one challenge in implementing the sanctions will be proving the connection between poachers, traffickers and armed groups.

"There are a lot of wildlife traffickers who are not providing funding to armed groups," she said. "I imagine that establishing the connection is a challenge, but it can be done and has been done effectively before." – Sapa-AP