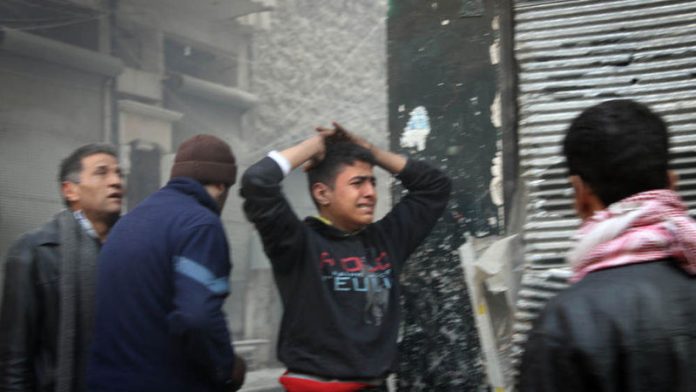 A contentious, week-long first round of Syrian peace talks ended on Friday with no progress towards ending the civil war and the government delegation unable to say whether it will return for the next round in 10 days.

Darkening the atmosphere further, the United States and Russia clashed over the pace of Syria's handover of chemical arms for destruction. Washington accused Damascus of foot-dragging that put the plan weeks behind schedule and Moscow – President Bashar al-Assad's big power ally – rejected this.

The Obama administration said it was working with partners to ratchet up pressure on Syria to accelerate the process, but stopped short of threatening any action if Damascus did not get the chemical weapons deliveries back on track.

UN mediator Lakhdar Brahimi, who has tirelessly pursued a peace deal that other diplomats consider "mission impossible", said the opposition delegation would be back on February 10. But President Bashar al-Assad's delegates had told him they would have to check with Damascus before agreeing to return.

"They didn't tell me that they are thinking of not coming. On the contrary, they said that they would come but they needed to check with their capital," Brahimi told a news conference.

Common ground
Brahimi listed 10 simple points that he felt the two sides agreed on in the talks and said he thought there was more common ground than the sides recognised.

But neither side has budged an inch from their main positions: the opposition wants the talks to focus on a transitional administration it says will remove Assad from power; the government wants to talk about fighting "terrorism" – a word it uses to refer to all its armed foes.

"Progress is very slow indeed, but the sides have engaged in an acceptible manner," said Brahimi.

Syrian Foreign Minister Walid al-Moualem blamed the lack of tangible results on what he called the immaturity and narrow composition of the opposition delegation and their "threats to implode" the talks, as well as blatant US interference.

"There are huge divides between [the opposition delegation] and what is happening on the ground in Syria. They are not in touch with what is taking place in Syria … and have no control over anybody on ground," Moulem told reporters.

Friends and foes
The Friends of Syria, an alliance of mainly Western and Gulf Arab states that back Assad's foes, faulted the Syrian government for the lack of diplomatic headway.

US state department spokesperson Edgar Vasquez said the Syrian government "continues to play games" with its non-committal stance to future talks while the opposition had shown it was serious in pledging to return to the table.

"The people of Syria are watching and will determine who truly has their best interests at heart. The Syrian people – who have suffered so much – deserve constructive engagement now and in the next round," Vazquez said.

Low expectations
Expectations had always been low for a breakthrough on political issues at the talks, the first between Assad's representatives and his foes in almost three years of strife that has killed 130 000 Syrians and driven a third of the population from their homes.

The sides could not even achieve more modest goals, such as an agreement to allow aid convoys into Homs, Syria's third-largest city, where thousands of civilians are trapped with no access to food or medicine.

"Homs was extensively discussed, although unfortunately there has been no breakthrough yet," Brahimi said.

Underscoring the relentlessness of the carnage, the Syrian Observatory for Human Rights, a Britain-based monitoring group, said 1 870 people had been killed during the week of talks, including 450 civilians and 40 who died from inadequate access to food and medicine in areas besieged by government troops.

With few achievements on substance, diplomats say the priority now is just to keep the talks process going in the hope that rigid positions can be modified over time.

Convener
Brahimi inherited the arduous challenge of convening talks from former UN secretary general Kofi Annan, who bowed out in 2012 saying the job was impossible as long as global powers were at odds. Since then, the task has only grown more difficult and the war bloodier and more fragmented.

Assad's forces have recaptured territory, reducing pressure on him to compromise. Western states that once brandished the threat of intervening against him abandoned such plans last year. The insurgents have become increasingly divided and Islamic militants have gained power on the ground – they refused to attend the talks.

The UN invited Assad's main Middle East ally Iran at the last minute, then reversed and revoked the offer.

The talks began with hardline speeches at a conference last week and repeatedly seemed on the verge of collapse before the two sides even entered the same room. Just getting them there was deemed an achievement.

Still, the sides took a first tentative step forward on Wednesday by agreeing to use a 2012 document as a basis for discussions. Thursday's final negotiating session began with a rare gesture of harmony when all sides observed a minute's silence for the 130 000 people killed during the war.

"All stood up for the souls of the martyrs. Symbolically it was good," said opposition delegate Ahmad Jakal.

Chemical delay
Last year saw Washington abandon plans for strikes to punish Damascus for using chemical weapons, ending more than two years of speculation that the West might join the war against Assad as it did against Libya's Muammar Gaddafi​ in 2011. Instead, Assad agreed to give up his poison gas stocks, a complicated process that has fallen six to eight weeks behind schedule.

Syria had given up less than 5% of its chemical weapons arsenal by Wednesday and will miss a deadline next week to send all toxic agents abroad for destruction.

US Secretary of State John Kerry said on Friday that Syria had no excuse for the delays and urged it to move "very rapidly" to allow them to be shipped out of the country.

Russia rejected the US accusations and blamed security on the road to the Mediterranean coast for the delays.

"We see that the Syrians are approaching the fulfilment of their obligations seriously and in good faith," Interfax news agency quoted Russian Foreign Ministry official Mikhail Ulyanov as saying. "Our American partners, in their usual manner, are betting on pressure even in those cases where there is absolutely no need for it." – Reuters