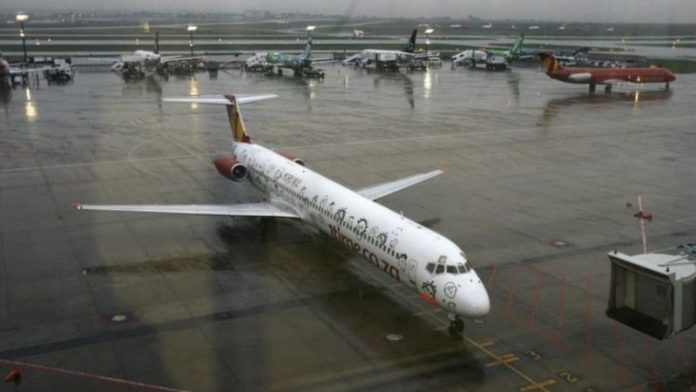 Three people were on board the Beechcraft King Air BE90 twin-engine aircraft when it crashed on landing.

The covered bodies were taken out of the wreckage and placed on stretchers before being loaded into mortuary vans.

Emergency workers drilled and cut through the plane using the jaws of life to get to the bodies.

"Something happened and it crashed on landing. It was flying in from one of the local airports," he said.

Rain
Airport spokesperson Claudette Vianello said the rainy weather could have contributed to the crash.

"Speculation is that it was due to the weather," she said.

Officials confirmed that all three were South Africans.

Planes continued to take off and land at the airport on Monday despite the crash.

Speaking at a breakfast briefing in Johannesburg, Public Enterprises Minister Malusi Gigaba sent condolences to the families of the victims.

"Our sympathy to the families, even though we do not know what happened yet. We send our condolences and hope God will comfort them," Gigaba said. – Sapa

Ian Khama and the post-presidential blues

Ian Khama thought he had executed the perfect transition from power. He was wrong. Now his hand-picked successor is tearing up his legacy
Read more
Sport

The photo claims to show the post-mortem examination of Sala's body in Dorset, southwest England, which was carried out on February 7
Read more
Sport

The jet vanished from radar just 13 minutes after taking off from the Indonesian capital, plunging into the ocean
Read more
Environment

Mansions at Blair Atholl illegally used water from boreholes. The estate is now trying to get permission for this — after the fact
Read more
National

The court ruled that a jet, which the Gupta family has been leasing, must be handed over to EDC and stored at Lanseria airport
Read more
Advertising
Continue to the category
Politics