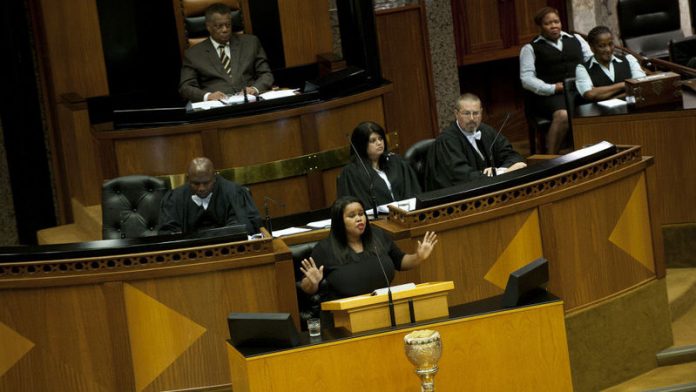 The Democratic Alliance's (DA's) parliamentary leader, Lindiwe Mazibuko, wants Parliament to investigate whether Public Works Minister Thulas Nxesi deliberately misled the legislature when he said a government report on the upgrades at President Jacob Zuma's Nkandla home had to be classified because it contained sensitive security information.

Mazibuko tabled a motion to this effect on Tuesday. This was after the high court in Cape Town ruled in Mazibuko's favour and instructed Nxesi to pay the DA's costs on Tuesday morning.

The report was classified "top secret" by Nxesi due to security concerns, he stated at the time.

"We have won the case with costs today. But the fight will continue. That is why I have today tabled a written motion calling for the honourable minister to be investigated for deliberately misleading this house," Mazibuko revealed during a debate on Zuma's State of the Nation address on Tuesday afternoon.

'Top secret'
​Mazibuko said that Nxesi revealed in a replying affidavit that his task team report into the Nkandla scandal never contained any security-sensitive information. In fact, the report released to the public by the government in December 2013 was the very same report that Nxesi classified as "top secret" in January of the same year.

"This means that the minister, before this house, and on many other occasions, misled South Africans into believing the classification was necessary to conceal information that was never there … He forced Parliament to collude with this charade by instructing you, honourable speaker [Max Sisulu], to refer the task team report to the closed standing committee on intelligence, all in an effort to conceal this so-called 'top secret' information, which never existed in the first place," said Mazibuko.

She said it was clear now that the cynical "classification" was only intended to protect Zuma from embarrassment and from being held accountable for the extent of this scandal. Mazibuko said this was only part of the problem as Zuma himself did not respond to the peoples' demands for transparency and accountability.

"Because we all know that [Zuma] does not have a single ounce of credibility on this matter … How can he when the R200-million upgrade of his private residence at Nkandla is the gold standard for government corruption in South Africa today?" asked Mazibuko.

She said Zuma's presidency did not fight for accountability; it, instead ran from it.

Zuma 'should have resigned'
Zuma claimed ignorance on national television this week, saying he did not know about the R200-million upgrade, adding that he would not resign because of it.

Mazibuko said if Zuma honoured the principle of good governance, and if he wanted to restore any semblance of a legacy, he should reconsider this position.

"In fact he should have resigned the moment the story broke that more than R200-million of public money was spent on his private home," she said.

Mazibuko then reiterated a statement she made last year, that should Zuma be implicated in any wrongdoing in the public protector's report on the Nkandla scandal, she will table a motion to impeach him.

"And while I cannot guarantee we will win the vote, I know that from the FNB Stadium in Gauteng to the forgotten people of Mothotlung, millions of South Africans will be calling for us to do the right thing … They know the real story, that our country cannot afford another five years of President Jacob Zuma," she said.

'Good story to tell'
​Mazibuko said while Zuma claimed, in his State of the Nation debate that the ANC had a "good story to tell" about the fight against corruption, South Africans had a very different story to tell about the past five years, a story of greed.

"At the heart of this story is the over R30-billion that is stolen from our people's pockets every year; a theft that deprives them of quality services and job opportunities, while enriching politically-connected insiders at their expense … This is the reason, that we have dropped some 22 places in the Corruption Perceptions Index ratings for corruption during this term of office," she said.

The debate on Zuma's State of the Nation address will continue on Wednesday and Zuma will respond to the debate on Thursday afternoon.