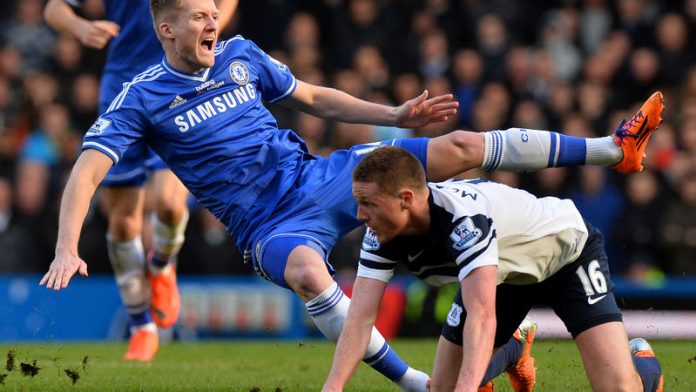 The Chelsea captain strained every sinew to get a faint touch to a Frank Lampard free kick in the 93rd minute and keep his team a point clear of Arsenal, who thrashed Sunderland 4-1 and three ahead of Manchester City who beat Stoke City 1-0.

Olivier Giroud netted twice for Arsenal while Yaya Toure was the match-winner for Manchester City who have a game in hand on their two rivals.

Champions Manchester United, in sixth spot, are no longer challenging for the title but manager David Moyes celebrated wildly as Robin van Persie's penalty and a goal from Wayne Rooney secured a 2-0 win at Crystal Palace.

After drawing their last league match against West Bromwich Albion and suffering a chastening FA Cup defeat to rivals Manchester City, Jose Mourinho's side were looking for a morale-boosting return to form.

Yet they looked sluggish for most of the match and after finally sparking into life they came up against a stubborn Everton rearguard that only crumbled deep into added time.

It came as a surprise to see Everton make all the running in the first half but Chelsea changed things up at the break, summoning the energetic Ramires from the bench to replace an injured Oscar.

The switch had an immediate impact on the flow of the game and the pressure built on the Everton goal. But Chelsea's attacking waves broke down at the final hurdle until the third minute of stoppage time.

At the final whistle Everton's feeling of injustice was heightened as it looked like Brazilian Ramires had gone down easily under a challenge from Phil Jagielka to bring about the free kick that led to the only goal.

"It was one of those situations where players were trying to buy too many free kicks," said Everton boss Martinez.

"You need a strong referee … you can see they are trying to get a dead-ball situation because they couldn't get any joy from open play."

Bruisinfg defeat
The bullied became the bullies at the Emirates Stadium as Arsenal recovered from the 2-0 home defeat by Bayern Munich in the Champions League on Wednesday to inflict a bruising on relegation strugglers Sunderland.

Having spent most of the match against the Germans chasing shadows, the home team jealously hogged possession against Gus Poyet's side, scything through them with a swagger that has been absent recently.

With Mesut Ozil rested after his penalty miss against Bayern, Arsenal took the lead after five minutes when Giroud, put on the bench in midweek, put the finishing touch to a sweeping passing move.

The Frenchman capitalised on shocking defending to double the lead after 31 minutes and Tomas Rosicky capped another excellent move to make it 3-0 three minutes before the break.

Sunderland left Laurent Koscielny in acres of space to power in a free header before the visitors mustered a late consolation through Emanuele Giaccherini's smart volley.

Manchester City also gained redemption for a painful 2-0 Champions League defeat by Barcelona on Tuesday by returning to winning ways against Stoke although they had to wait until the 70th minute to break through.

Toure swept in an Aleksandar Kolarov cross to relieve the pressure on manager Manuel Pellegrini who had endured a difficult week after being charged by UEFA for questioning the impartiality of their referee in Europe.

Manchester United have only a small chance of qualifying for next season's Champions League but there was widespread relief at Selhurst Park when Van Persie broke the deadlock from the penalty spot after Patrice Evra was fouled.

Rooney, who agreed a bumper new contract on Friday, confirmed his value to the club with a powerful finish on 68 minutes having been picked out by Evra.

At the other end of the table, Felix Magath, Fulham's third manager since Dec. 1, was denied a winning start against West Bromwich Albion when Matej Vydra notched an 86th-minute equaliser to earn a 1-1 draw after Ashkan Dejagah had opened the scoring.

Hull are six points clear of trouble, one behind 10th-placed West Ham United who continued their recent resurgence with a 3-1 win over Southampton.