An angry tide: The increasing rise of radicalism 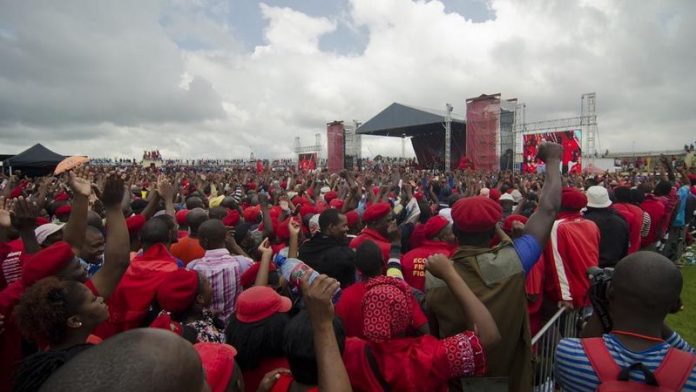 The analysts scream populism; pipe dreams; unrealistic visions. Sitting in the ivory towers of government and ruling capital, across the dinner tables of the chattering classes in the suburbs, the disquiet of the rooi gevaar rises and rises. Who are these demagogues? Who is this rag-tailed bunch of radicals with ominous red berets? Who are these strikers threatening our prosperity in South Africa?

The reality is that the workers, the youth, the poor locked into poverty in our townships and rural villages won the freedom and democracy we enjoy. Excluded and marginalised, they are driving the rising discontent in our society. It is time for our leaders to be very worried.

The TV images of burning barricades, police in armoured vehicles firing teargas and even live ammunition, heaps of rubbish piled on streets, communities without water and basic services. It bears all the hallmarks of the conflicts and struggles of the 1980s. It brings back painful memories of the days when guns enforced the will of a hated apartheid regime. This cannot be the result of 20 years of freedom.

And the organised centre of radical political thought, Cosatu, has been emasculated thanks to the shenanigans of the ruling establishment and much to the cheering from the sidelines of big capital. Cosatu, paralysed by the internal political divisions, its leadership disconnected from its membership base and its general secretary, Zwelinzima Vavi, suspended and demonised, is a shadow of its former self. The consequences are that radical political thought has shifted to the Economic Freedom Fighters (EFF), Amcu and a rising collection of militant offshoots.

We have two options facing us today. One is to hide behind higher walls, armed response and the gated bubbles we live in. To blindly endorse the increasing militarisation of the police forces acting as a battering ram of political enforcement against the people. That low road of denialism will lead to increasing civil unrest and a total breakdown in social cohesion.

The last time we saw such denialism was in relation HIV and Aids, and it is what led to the needless deaths of over 350 000 innocent citizens. We cannot allow such blind politics today to destroy the future of our country. The challenges we experience today are happening on our watch. Let us have the courage to face that fact, and to act.

The alternative is about tough choices. We have a country rich with mineral wealth, natural resources and our youth population. Our budget has quadrupled since 2000 to over a trillion rand. What have we seen for this? As the biggest economy in Africa we have squandered our political and social capital. We are the not the case of exceptionalism we once were.

For South Africa, it is an acid test of our governance and leadership. We cannot measure success from social security grants alone. We must measure success by the skills and pathways we create for young people out of the trap of poverty and marginalisation. Yet all the statistics point to massive systemic failures in our education system. More than half of young people leaving 12 years of education have few skills, no jobs and are unlikely to have a job in their lifetime.

Our current economic system marginalises the youth. And we see them starting to push back everywhere. In wage demands in the mines and the factory floor to the service delivery protests in our townships to the students demanding bursaries to study in our universities. These are red lights for our democracy.

We don't have a compelling narrative as to how we should think about the future. Whatever the answer, it cannot be derived from ivory towers, but needs frontline guidance of people’s lived experiences. To those in power, humility and active listening is the attitude people seek.

On Wednesday the national Budget is delivered in our Parliament.

We want answers as to what our tax money has changed in the lives of our people on the ground. Undertake to break the billions into what local communities can understand. Arm them with the budget for each school, each clinic and each housing programme; tell us who the responsible official is; what his/her contact details are. Involve the community in measuring delivery by making the budgets allocated to them transparent. We want to follow our tax money and know if anyone is stealing it. Because the experience of many communities is that delivery has largely become corrupted and that implementation has often been hijacked by predatory elites.

The public protector, Thuli Madonsela, respected by all outside a coterie of politicians, said in our Parliament in October last year, "All that I can say to this nation and this committee is: corruption in this country has reached crisis proportions, there is no two ways about it."

The 2013 Corruption Perception Index published by Transparency International ranks South Africa 72nd out of 177 countries, with a score of 42. Countries like Cape Verde, Mauritius, Rwanda, Botswana, and Seychelles surpass us. In 2012, South Africa was ranked as the 9th most corrupt country in Sub-Saharan Africa.

Something is wrong in the heart of our state. We need a thorough re-set; a revolution in ethics; a new revolutionary partnership with citizens and the civil society. Informed and educated citizens are our greatest ally in fighting corruption.

There are many civil servants who are decent and honest professionals. They are scandalised by the unethical behaviour of their superiors. But they have mortgages to pay, food to put on their table for their families and children to educate and clothe. Many are too afraid to talk. They need to be organised and supported by us, the citizens. They need to be protected against the wrath and victimisation of their political bosses. We need to strengthen the "whistle-blowing" protection programmes.

Side by side we have to apply ourselves to the challenge of job creation and entrepreneurship. The deracialisation of our economy, which is imperative, must prioritise the jobs and livelihoods. State funding cannot be used simply to enable the transfer of wealth to politically connected individuals. There are thousands of young black graduates walking our streets, and many more who may not have the qualifications but today do the job, often at a low salary.

There are also tens of thousands of small black businesses that need a hand up, though many are marginalised as tenders go to friends and family of councillors and municipal officials or to those who are politically connected. These small businesses are our main driver of job creation but many today have simply closed down and, with it, weakened our industrial base and delivery capacity.

Importantly, the scandals of collusion need decisive action; construction companies around the World Cup stadiums; the despicable bread price fixing; the rent seeking elites who today are the modern gatekeepers to state licenses and tenders. Many businesses have been co-opted by those politicians and state officials implicated in corruption.  It is time for business leaders to stand up and declare where they stand and what they will do to address the growing joblessness and inequality in our country. The standard answer, "I pay my taxes", holds no water today. In the eyes of the majority of workers and youth, they look at the soaring profits of established business and see the business owners as part of a deeply compromised economic system.

And finally we need to vigorously resist the dumbing down of the media. Now more than ever we need courageous and fearless journalists. Not the sycophantic embedded sunshine journalism many politicians hanker after.

After all, the next generation is finding its cause of economic and political justice; they are raising their militant voices; they are radical; and many I have spoken to say, "They have nothing to lose but their chains."

To the ruling establishment: Listen very carefully to the rise and rise of the anger of our people. In this period we do not need our leaders in government, the political parties, civil society, trade unions or business to have their proverbial head in the sand. We need to all listen and act on the legitimate grievances coming from the ground. – Daily Maverick

Jay Naidoo is founding general secretary of Cosatu, former minister in the Mandela government and chair of GAIN, a global foundation fighting malnutrition in the world. You can also visit his Facebook Page or www.jaynaidoo.org.?