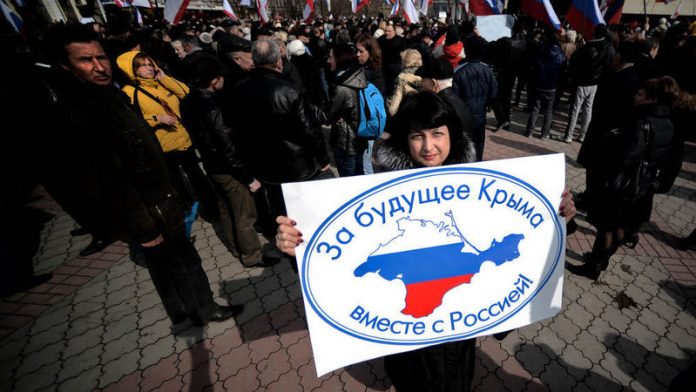 Russia's takeover of the Crimean peninsula has drawn condemnation from the West, but ­reaction has been more varied in the 14 former Soviet republics in Russia's "near abroad". Many have played a balancing act between ­Russia and the West, and almost all have significant Russian-speaking populations.

Azerbaijan
The oil-rich country in the South Caucasus has played the United States and Russia off against each other, previously hosting both a Russian radar base and American troops. "It happened in South Caucasus and it's happening now in Ukraine. It's sort of the Soviet Union coming back," said Emin Milli, a journalist and activist in Baku.

Georgia
Reaction has perhaps been strongest in Georgia, which lost about 20% of its territory when Russia cemented its control of two break–away ­republics in the 2008 war. "You hear a lot that Russia is repeating in Ukraine what it did to Georgia in 2008," said Koba Turmanidze, the president of the Caucasus Research Resource Centres in Georgia. "The ­government is trying to be diplomatic, because it came to power promising to improve relations with Russia."

Kazakhstan
The most influential country in central Asia, Kazakhstan is one of only two full members of Russian President Vladimir Putin's customs union. Nargis Kassenova of Kimep University said: "There is a considerable chunk of the population whose opinions are formed by Russian media, and there is an increasingly vocal patriotic and liberal community [which is] getting upset with Russia."

Kyrgyzstan
A revolution in impoverished, mountainous Kyrgyzstan in 2010 brought in a regime that voted decisively to close the US airbase at Manas by 2014, which had been the main transport hub for the war in Afghanistan. "We can imagine very vividly how the Russian airbase in Kant [in Kyrgyzstan] could be used to land paratroopers to ‘restore constitutional order' at the behest of an ousted kleptocrat," said Edil Baisalov, a Bishkek-based political analyst. "But most Kyrgyz, including most of the political class, view the world through the prism of the dichotomy of good Russia versus evil America."

Uzbekistan
The US leased an airbase there, until strong-arm President Islam Karimov, who has ruled the ­country since 1989, ended the arrangement in 2005 in an apparent move to improve relations with Russia and China. "Officials in Tashkent are worried about the domino effect of an unbound Russia. In the minds of Uzbek officials, the fall of Ukraine will inevitably lead to the fall of Uzbekistan," said Alisher Khamidov, a researcher on central Asian affairs. "After Ukraine, Uzbekistan will move to beef up its military and build closer military partnerships with China and the West."

Tajikistan
Located on the border with Afghanistan, Tajikistan is the former republic most dependent on remittances, with half of its gross domestic product coming from Tajik citizens working in Russia. "All the countries in the former Soviet Union are on their guard; they understand that the strategy used in Ukraine, Ossetia and Abkhazia could be used against them," said Parviz Mullodzhanov, a political analyst in Dushanbe. But he also said the majority of the population did not criticise the intervention in Crimea.

Estonia
Estonia joined the European Union and Nato in 2004, and has had frequent political clashes with Russia, including over the removal of a Soviet-era war monument in Tallinn. "People fear that Russia could use these ­methods against Estonia, although we are members of Nato," said Silver Meikar of the Institute of Digital Rights. "People living near the Russian border watch the Russian news, and then when they talk to another Estonian, they have a very different understanding of what's going on in Ukraine because of the propaganda."

Belarus
Often called the last dictatorship in Europe, Belarus has not experienced the market reform and investment many other former Soviet republics have, and its strongman leader, Alexander Lukashenko, is persona non grata in Europe and a firm ally of Putin. "Speaking selfishly, a Russian Crimea is preferable and more comfortable as a vacation ­destination for Belarusians, but they see Hitler in Putin's methods," said photographer Andrei Dubinin. "If it wanted to, the Kremlin wouldn't have much trouble joining the whole country to Russia with economic and political methods."

Lithuania
Lithuania joined the EU and Nato in 2004, but retains a sizable population of ethnic Russians. "Most people know that there is a small chance of something similar happening here, but the Russian minority is too small," said Jonas Bidva, a logistics manager in Vilnius. "Latvia and Estonia would be more on the radar. But the majority of people do not believe that Nato or EU would do anything to defend us if it happened in the Baltics."

Moldova
Russia has propped up Moldova's breakaway republic of Transnistria, but the country has had mixed relations with Moscow. About one million Moldovans work in Russia and half as many work in the EU. "Part of the population is more inclined toward the EU, and considers this to be Russian imperial expansion," said Tatyana Nita, international secretary for Moldova's Social Democratic Party. "But others consider Russia to be a superpower that supports Moldova and other former Soviet republics, and [believe] that Europe wants to get revenge on Russia [by forming] economic ties with other former Soviet republics like Belarus, Georgia, and Ukraine." ­– © Guardian News & Media 2014