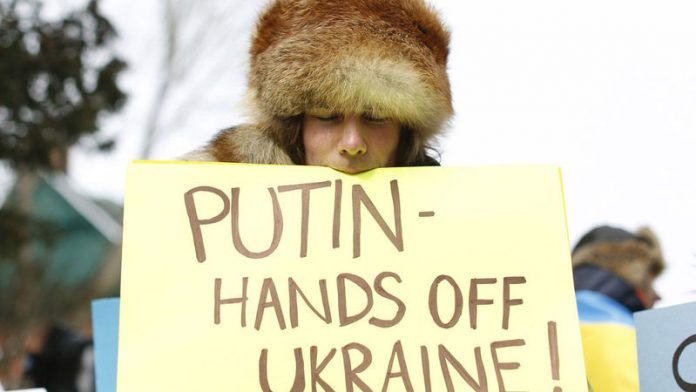 Putin promised to protect a bank partly owned by an old ally, which Washington has blacklisted, and his spokesperson said Russia would respond in kind to the latest financial and visa curbs after producing one blacklist of its own.

His allies laughed off the US sanctions but shares on the Moscow stock exchange – which have lost $70-billion of their value this month – fell sharply after President Barack Obama also threatened to target major sectors of the economy if Russia moved on areas of Ukraine beyond the Black Sea peninsula.

Obama's national security adviser said the world was reassessing its relationship with Russia and Washington was skeptical of Russian assurances that troop movements on the Ukraine border were no more than military exercises.

The financial noose began tightening with Visa and MasterCard stopping processing payments for a Russian bank owned by two brothers on the US blacklist. Finance Minister Anton Siluanov said Russia might cancel its foreign borrowing for 2014 and raise less domestically if the cost of issuing debt rose.

Shaken by the worst East-West crisis since the Cold War, the EU also pledged to cut its reliance on Russian energy and signed a political deal with the pro-Western Ukrainians who took power after Moscow-backed President Viktor Yanukovich's overthrow last month.

In a Kremlin ceremony shown live on state television, Putin signed a law on ratification of a treaty making Crimea part of Russia and another creating two new Russian administrative districts: Crimea and the port city of Sevastopol, where Moscow keeps part of its Black Sea fleet.

Thousands of Russians marked the annexation with fireworks and celebrations in Simferopol, capital of Crimea where the population is around 58% ethnic Russian.

"Many people wanted this, to go back, not to the USSR, but to that big country of ours," said Anna Zevetseva (32). "We are waiting for things to improve and for investment from Russia."

Ukrainian and Tatar residents stayed behind closed doors. Sergey, a 64-year-old Ukrainian businessman who did not want to give his surname, saw no reason to celebrate. "An occupying force is in my country and we have been annexed," he said.

Inner circle
A referendum last Sunday after Russian troops seized control of Crimea overwhelmingly backed union with Russia but was denounced by Washington and the European Union as a sham. It opened the way for annexation within a week.

The OSCE European rights and security body finally agreed to send monitors to Ukraine after a delay Western members blamed on Russia but Moscow said it would have no mandate in Crimea.

Obama's decision to target people who accompanied Putin's rise from the mayor's office in St Petersburg in the 1990s to the Russian presidency deepened the diplomatic confrontation.

Putin said Bank Rossiya, singled out by Washington as the personal bank for senior Russian officials, had nothing to do with events in Crimea.

The St Petersburg-based bank – which is chaired and partly owned by Yuri Kovalchuk, an old associate of Putin's – mainly serves clients in Russia's energy sector including businesses owned by state-run gas producer Gazprom.

Putin, who says Crimea has exercised its right to self-determination, promised to transfer his wages to Bank Rossiya. "I personally don't have an account there, but I certainly will open one on Monday," he told Russia's Security Council.

Others on the US blacklist include oil and commodities trader Gennady Timchenko and the brothers Arkady and Boris Rotenberg, who are linked to big contracts on gas pipelines and the Sochi Olympics, as well as Putin's chief of staff and his deputy, the head of military intelligence and a railways chief.

The EU has made progress in diversifying since crises in 2006 and 2009, when rows over unpaid bills between Kiev and Moscow led to the disruption of gas exports to western Europe. But Russia still provides around a third of the EU's oil and gas and 40% of the gas goes through Ukraine.

European Council President Herman Van Rompuy said member states would help one another to maintain supplies if Moscow cut them. "We are serious about reducing our energy dependency," he told a news conference at the end of a summit in Brussels.

EU countries, which buy Russian gas individually, will also look to negotiate supply deals jointly with Moscow to increase their bargaining power. "It is clear we need to be moving towards an energy union," said Van Rompuy.

German Chancellor Angela Merkel raised the possibility that US shale gas could eventually be an option for European countries seeking to diversify. Obama is expected to address the issue at a summit with EU leaders next Wednesday.

Foreign banks and companies now fear the secondary ripple effects of the sanctions. In a worst-case scenario for them, Washington would stop banks doing business with Russian clients, similar to the sanctions that were imposed on Iran.

"What has been announced so far is really nothing. It's purely cosmetic," said a French banker based in Moscow, adding that the biggest risk was to transfers in US dollars, crucial for the energy export-dependent Russian economy.

Obama said on Thursday that Washington was also considering sanctions against economic sectors including financial services, oil and gas, metals and mining and the defence industry, if Russia made military moves into eastern and southern Ukraine.

In Crimea itself, Ukrainian troops who have been surrounded by Russian forces continued to leave their bases, powerless to halt Moscow's takeover of the peninsula.

"The situation in Ukraine remains unstable and menacing," said German Foreign Minister Frank-Walter Steinmeier, urging the OSCE observers to take up their work as quickly as possible.

They also promised financial aid for the government – rejected as illegitimate by Moscow – as soon as Kiev reaches a deal with the International Monetary Fund.

The IMF is to report next Tuesday on advanced talks with Ukraine on a loan programme that would be linked to far-reaching reforms of the shattered economy.

Three months of protests were set off by Yanukovich's refusal to sign an association agreement with the EU, the political part of which was signed on Friday.

Russia's MICEX stock index fell about 3% when trade opened, although it recovered some of the losses later. Promsvyazbank analyst Oleg Shagov said Obama had "opened a Pandora's box full of sanctions", with future sanctions to be "directed against whole sectors of the Russian economy".

Negative market sentiment was reinforced by warnings from credit ratings agencies Fitch and S&P that they were changing their outlooks on Russia to negative from stable because of the possible impact of sanctions on Russia's economy and business climate. Both agencies presently rate Russia BBB.

Prime Minister Dmitry Medvedev made clear that Russia would step up financial pressure on Ukraine. He said the former Soviet republic should repay Moscow $11-billion under a gas supply contract that should be scrapped because it no longer applied. – Reuters