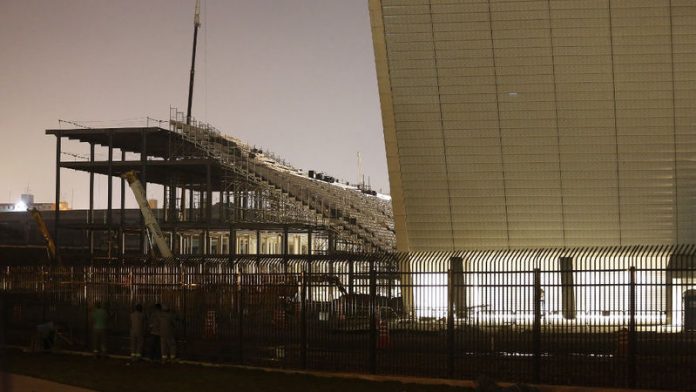 Another man has died while helping to build the São Paulo stadium that will host the opening match of this year's World Cup in Brazil, a hospital spokesperson said on Saturday.

He is the third construction worker to perish while working on the Arena Corinthians on the outskirts of São Paulo and the seventh to die in building Brazil's World Cup arenas.

Fabio Hamilton da Cruz fell about seven metres to his death on Saturday morning, said a spokesperson for the Santa Marcelina hospital where he was taken.

He was installing floors on the temporary stands being constructed at the ground that will host the Brazil-Croatia opener on June 12.

Fatal accidents have also occurred in Manaus and Brasilia. Another worker died while working on Palmeiras's arena in São Paulo, but that stadium will not be used in the World Cup.

The Arena Corinthians is among the most expensive of Brazil's 12 World Cup venues and was one of the last to be started.

It is designed to seat 48 000 people but another 20 000 seats are being added for use during the tournament.

The construction worker was helping install the temporary stands when he fell.

The stadium was supposed to be finished in December but the delivery date was pushed back after two workers were killed in November when a crane toppled over.

Work has been slow since then and there is concern that security may be taking a back seat to haste as workers rush to finish the stadium in time.

The stadiums in Cuiaba and Curitiba are still not finished.

The 2014 World Cup, the first to be held in Brazil since 1950, has been beset by delays, cost overruns and broken promises.

In addition to the late delivery of stadiums, several important public transportation projects have been scaled back or abandoned.

Soccer's world governing body Fifa last week said it remained confident everything will be finished in time for the start of the tournament. – Reuters