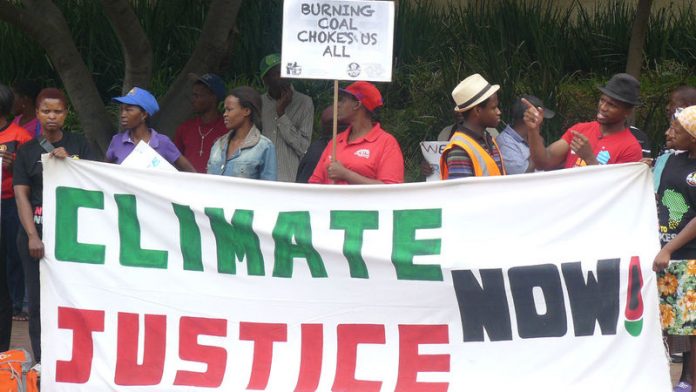 It was hailed by the City of Johannesburg hosts as a major success, but not so much by non-governmental organisations, such as Earthlife

Africa, who mounted a demonstration during the conference to highlight what they say is inaction by the City of Johannesburg on climate issues.

“It is about time the major contributors to climate change stop talking and take meaningful action,” said Makoma Lekalakala from Earthlife Africa Johannesburg.

Earthlife challenged Johannesburg mayor Parks Tau to shut down the carbon-belching Kelvin power station run by the City as a sign of commitment to a low-carbon future.

Tau acknowledged that South Africa still depends on coal and said there is a need to shift to low-carbon energy. The City has invested heavily in public transport and Tau’s flagship programme, the Corridors of Freedom, will promote densification around transit corridors and ensure a more compact city with lower CO2 emissions.

The C40 was launched in 2005 and is the brainchild of the former mayor of London, Ken Livingstone, who partnered with the Clinton Climate Initiative to create a platform to showcase city action on climate change.

The C40 has grown substantially since then, with a total of 66 affiliated cities, which between them are home to one in 12 people worldwide.

The C40 has become a recognised global voice for cities on climate change and has succeeded in getting cities represented in the notoriously archaic UN climate negotiations.

As many of the speakers at the Johannesburg summit underlined, cities are at the coal face of climate issues — they are the location for the bulk of the world’s economic activity and energy consumption, and account for about 70% of the world’s CO2 emissions.

Cities are able to fundamentally influence the rate and pace of emission reductions by, for example, creating public transport systems or promoting more energy-efficient forms of settlement.

At the same time, because of their high population densities and large ecological footprints, cities are extremely vulnerable to climate change and need to take proactive steps to build the resilience of urban communities to the effects of climate change.

The devastation caused by Hurricane Sandy in New York is a graphic reminder of this danger. New York’s response and climate adaptation plan in the aftermath of the hurricane have been lauded as state of the art, with kudos going to former mayor Michael Bloomberg.

His slick media operation and power-broking style certainly caused quite a stir, with aides treating him like a president and planning his appearances at the summit down to the last minute.

To Bloomberg’s credit, the C40 received a major boost under his leadership, turning it into a high-powered network and slick communications campaign that, of course, also boosted Bloomberg’s own role and profile. He has now landed a position as special adviser to the UN secretary general, and handed over the reins of the C40 to Rio de Janeiro mayor Eduardo Paes.

Paes will hopefully bring more of a developing world perspective to the C40. Together with Tau and Trevor Manuel, he formed an articulate “south” lobby group at the Johannesburg summit.

The summit released a report called “Climate Action in Megacities 2.0”, which highlights the actions C40 cities are already taking. Almost all the cities say climate change presents significant risks to their populations and, in the two years since the last survey, the number of climate actions to reduce emissions has nearly doubled to more than 8000.

Earthlife Africa says this is still not enough.

It has challenged cities to use their buying power to focus on procuring renewable energy, to put in place “net metering” for households (which encourages them to generate their own renewable energy) and to put pressure on national governments to address the threats of catastrophic climate change.

Despite the criticisms, it seems the C40 member cities are more than willing to respond to these issues, even if the pace at which they do so is slower than many would like.

As Tau said, the ability to hold each other accountable and to measure what we are doing is important to help us move forward. This is part of what the C40 is about.

Tau is tipped to take over the C40 from Paes at the next summit.

Dr Crispian Olver is chief executive of Linkd Environmental Services and a member of the Greening the Future Awards judges panel.

Training locals to be tomorrow’s managers

The map beyond the tap