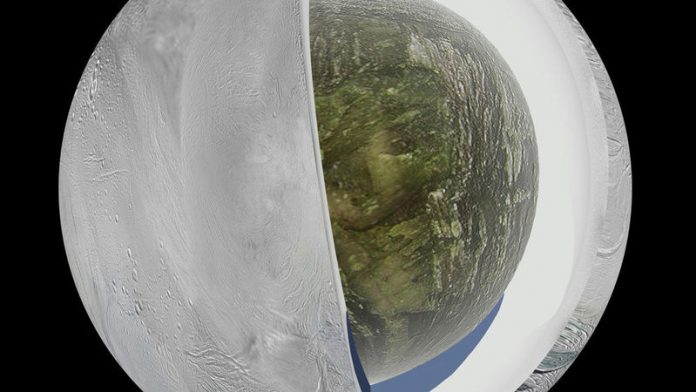 Add Enceladus, a small moon orbiting the giant ringed planet Saturn, to the growing list of places beyond Earth that have oceans – and prospects for hosting life, a study released on Thursday shows.

Situated some 1.3-billion kIlometres away in the outer solar system, icy Enceladus seems an unlikely place for liquid water.

But gravity measurements taken by Nasa's Saturn-orbiting Cassini spacecraft indicate the moon contains an underground ocean in its southern hemisphere. The ocean is believed to be at least as big as Lake Superior, according to research published this week in the journal Science.

Computer models indicate the ocean is likely sandwiched between the moon's rocky core and its ice-covered surface, said planetary scientist David Stevenson, with the California Institute of Technology.

It likely formed and is sustained by tidal heat from gravitational tugging by Saturn and sister moons on Enceladus.

An underground ocean "provides one possible story to explain why water is gushing out of these fractures", Stevenson said in a statement.

'Place to look for life'
The prospect of liquid water, particularly water that comes close enough to rock to leach out minerals, raises the likelihood that Enceladus has chemistry suitable for life, planetary scientist Jonathan Lunine with Cornell University told reporters on a conference call on Wednesday.

"The interior of Enceladus is a very attractive potential place to look for life," Lunine said.

Enceladus, which is only about 500km in diameter, joins Saturn's large moon Titan and Jupiter's Europaand Ganymede as places beyond Earth that are likely to contain oceans.

Only Enceladus and Europa, however, show evidence that their oceans are in contact with rock.

To get Enceladus's gravity maps, scientists had to tease out signals in Cassini's radio transmissions that changed by just a fraction of a millimetre per second.

The measurements were made as Cassini flew close by Enceladus three times from 2010 to 2012. The flybys showed Enceladus had a different gravitational grip on Cassini depending on whether the spacecraft passed over the moon's northern or southern hemisphere.

Taking into account what materials are available in the outer solar system – namely rock and ice – the scientists then set about running computer models to assess the most likely cause of Enceladus's asymmetrical gravity.

Their answer: a large ocean about 10 kilometres deep that is covered by 30km to 40km of ice.

Follow-on missions
Cassini, which has been studying the Saturn system for a decade, has three more passes by Enceladus before its mission ends in September 2017. No more gravity measurements are slated during those flybys, however.

Scientists are working on follow-on missions proposed for both Enceladus and Europa.

"I don't know which of the two is going to be more likely to have life. It might be both. It could be neither. I think what this discovery tells us is that we just need to be more aggressive in getting the next generation of spacecraft both to Europaand to the Saturn system once the Cassini mission is over," Lunine said. – Reuters