Turning brutalism and blobitecture into architecture 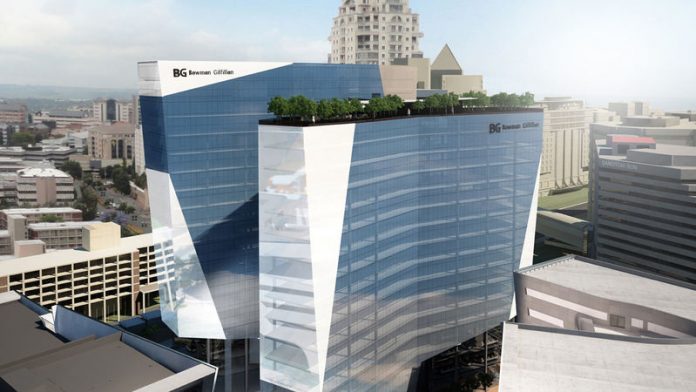 In South Africa, we’re accustomed to our office buildings — old and new — having a fairly regular shape to them: there are usually lots of 90 degree angles, perfect corners and a fairly regular ratio of concrete to windows (with more of the former than the latter), with the brutalist lines popular in the 1970s and 1980s still dominating, even in more recent, softer interpretations of the style.

But times are a-changing and the influences behind those changes may surprise you. “The two main things that shape our design are our client, and the changing technology of design and construction materials,” says Hugh Fraser, architect and spokesman for Paragon Architects.

“It’s the client that gives us the free rein to create something magnificent — or who reins us in to design something that meets their imagination. The changes in construction materials and design technology in the last decade have made it possible for us to create shapes and structures that before could only be dreamed of.”

Paragon is the South African firm behind some of Sandton’s most striking new buildings, including the Norton Rose Fulbright building, The Creative Counsel offices, the new Alexander Forbes building and the three phases in the renewed Alice Lane precinct, which includes the new offices for Bowman Gilfillan (a repeat customer). None of these buildings could be remotely described as regular in shape — or colour, for that matter – but they draw a line in the sand for commercial architecture in South Africa.

There is no longer any excuse for a corporate building to be boring, inside or out. However, Fraser says that no matter how romantic the notion of creating a remarkable space for people to work in sounds, designing a commercial building is primarily a spreadsheet exercise.

“Keeping control of costs is the overriding driver in a project, whether it is the costs of building, the costs of maintaining or the costs of running the building once it is complete,” he says.

While “greening” a building reduces the long-term running costs of a building, the costs in construction can be off-putting to developers: aiming for a four Green Star rated building can add up to 8% to costs, a five Green Star building incurs up to 11% more costs, while a six Green Star project can cost up to 13% more.

There’s the added complication that green or efficient design may not always have the desired outcomes. Fraser mentions that in the Alexander Forbes building allowances were made for grey water from showers in the building’s gyms to be used for irrigation, but the gyms don’t generate as much as expected and so there’s a greater dependence than planned on council water for irrigation.

Beyond the ever-present spreadsheet, evolutions in software have made it possible for architects to design more organic shapes that are beautiful, practical and most importantly, possible. Pre-manufacturing of buildings is also making new shapes possible, with technical concrete panels being made off-site and leveraged into place.

“This method not only reduces time on site, it also makes it simpler to address any errors on site,” says Fraser. “If a panel is damaged, it can be replaced because every single piece has its own clear identity, such as the unitised panels on Alice Lane Phase One: Marsh.”

Advancements in technical glass are another significant factor, with glass panels being so much more than windows — they play a key role in energy efficiency by helping control the amount of energy required to heat, cool or light a building. Interior construction has also evolved: plasterboard products such as Saint-Gobain’s Activ’Air actively improve air quality by removing volatile organic compounds from the air, for example.

Building owners are slowly coming round to the benefits of including more human spaces within their buildings too, although the design of a project is still governed by the mores and thinking of the company that will occupy it.

While the trend is back to open plan office space, primarily to reduce costs, this also reflects a move towards open communication and a democratisation of space in the working environment. However, the way that space is designed will reveal much about the company’s approach to its employees and its clients.

A recent report by Deloitte in Australia took a look at the workplace of the future, and opined that: “[The workplace of the future] will be designed to connect and facilitate, [it] will operate more like interconnected hubs and allow people to select from a variety of work spaces that will suit changing needs and wants… We also predict that workplaces will be designed to attract people and this will create a focus on vibrant precincts with easy access to transport, services, entertainment, food, retail and housing.”

Perhaps the most telling outcome of the report is that workplaces will be nurturing, collaborative spaces that attract talent, rather than contain it. The report highlights changes in working practices prompted by technology as a driver of change in design, with the traditional office being an idea rather than a practical reality as hot-desking, home working and part time working become more possible thanks to cloud solutions and connectivity.

Changes in technology also mean that space can be more efficiently used: massive server rooms are no longer required, and workers can be connected wirelessly within a space, reducing the need for fixed information technology infrastructure.

Even though there may be fewer people who are office bound, those who are in the office are closer together than ever before, with an average of between nine and 11 square metres being allocated to each worker in an open plan space.

While South Africa seems to be moving away from its brutalist past, we seem to be a far way from the blobitecture that is the extreme version of the more organically shaped buildings we’re seeing abroad. Look out for the Graz Art Museum in Austria, or the Golden Terraces Building in Warsaw, Poland for extreme examples — although it could be said that our own FNB Stadium would be right at home on a list that included those two international examples.

When it comes to commercial spaces other than offices, Fraser’s associate Vivien Yun points out that the trend in retail development is to focus on more lifestyle oriented design, creating environments that are more than shopping centures, but rather places for communities to gather.

“We are incorporating facilities such as outdoor play areas for children, open air amphitheatres and outdoor market places, which help start up small businesses while being careful not to be in competition with main retail tenants,” he says. “Sustainability is a vital consideration, particularly when designing retail spaces in outlying areas of South Africa and further afield on the continent, as services are often challenging.

“Therefore, we need to build consciously, reduce our energy waste and use alternative energy sources such as photovoltaic cells, and make use of sewer package plants, grey water harvesting, and bore holes, where possible.”

Yun’s colleague, Melanie Bakker, adds that many shopping centres are moving away from the full fashion anchor tenant mix, allowing more restaurant and entertainment spaces. “The advance and growing popularity of online shopping is posing a real challenge to retail developers,” she says. “Shopping centres will have to adapt and keep up with technological and cultural changes. “For a shopping centre to be competitive now, it should be designed with specific draw factors like individual design, newsworthiness (such as Green Star ratings), and family and community focused amenities and spaces.”

When it comes to education, specialist in this field Estelle Meiring points out that “the aim is greater flexibility, with more variations in sizes and types of learning spaces. Connections to the outside and garden learning spaces are also becoming more prominent, and healthy socialisation is encouraged by creating courtyards and streets, instead of long, narrow passages —and technology is playing an increasingly important role.”

Fraser notes that architecture is the slowest-moving of all the arts, but emphasises that it captures the tone of an era. While the magnificent structures of the country’s changing cityscapes may be far removed from much of South Africa’s reality, they do connect us to global trends in business and space management.

They could indeed be the stepping-stone for South Africa to embrace the current global trend of creating multi-use commercial spaces, incorporating commercial, residential, retail and leisure facilities in one building or precinct. Melrose Arch is a great South African example of this, but more development in this vein needs to happen for precincts such as Sandton to become more welcome, more human and more engaging.

This article has been made possible by the Mail & Guardian’s advertisers. Content was sourced independently by the M&G’s Supplements editorial team.

Property trends pre-Covid and beyond: What’s going on?

The end of the office as we know it?

Rent or buy: The debate rages on

The mystery of the many shopping centres, explained

Designing productive spaces in your workplace