People’s protest is being criminalised 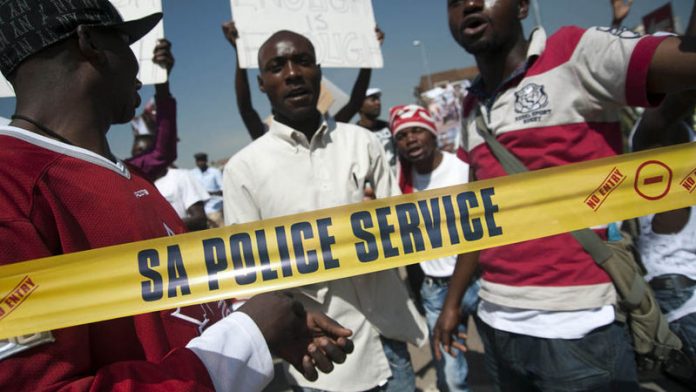 The South African Constitution guarantees the right to assemble, demonstrate and picket. But to what extent are South Africans able to practise this right?

Research undertaken into 12 municipalities suggests that, although this right is still being largely respected, there are signs that it is being eroded.

My research was precipitated by a pilot project on the Rustenburg municipality’s response to protests. The research found that, in 2012, the year that industrial protests peaked in the platinum belt, the municipality banned 53% of them, largely on the grounds that they were not recognised by the Regulation of Gatherings Act, which gives effect to the right.

The rate of prohibition was so high because the municipality imposed largely unlawful conditions on protests and placed an impossibly high bar on the right to protest lawfully. For instance, the municipality required protesters to seek the permission of local chiefs if they intended to protest in areas falling under traditional authorities.

If protesters wanted to deliver a memorandum, they were required to obtain a letter from the person against whom they were protesting, confirming that she or he was willing to receive the memorandum.

This makes the right to protest subject to the say-so of the person against whom the protest is directed, with the obvious result that permission is withheld to stifle it.

The research did not find any other municipalities with such extreme problems. On the contrary, it revealed the everyday humdrum of protesting. The vast majority of protests go off without incident and municipal prohibitions are the exception rather than the rule. Unsurprisingly, protests were more likely to be prohibited than gatherings.

Yet there were clear signs in the municipal records of unreasonable conditions being placed on protests and of protests being banned unlawfully – and the practice has increased since 2012.

Two Eastern Cape municipalities, Nelson Mandela Bay and Lukhanji, and the Phumelela municipality in the Free State have a requirement similar to Rustenburg’s, with a confirmation letter from the person who is going to accept the memorandum being required before the municipalities will authorise the gathering.

Municipalities impose this condition to ensure that the protest goes off without incident and that the potential for a no-show by the intended recipient is minimised, which they claim may lead to violence.

The Witzenberg municipality in the Western Cape, on the other hand, has adopted a more enlightened approach; it merely requires the convener to confirm whether the person who is meant to accept the memorandum has been informed.

In the Eastern Cape, the Makana municipality’s records reveal a high number of prohibitions relative to approved protests, especially of the municipality’s vocal political critic, the Unemployed Peoples’ Movement (UPM).

In 2010, a UPM march against unemployment was prohibited and the reason given was that “a meeting with the officials must be called for a follow-up on previous matters and tabling of the current ones”.

This is unlawful as the Act does not stipulate how grievances should be resolved before an organisation takes to the streets.

Several marches were held by schools and students in Makana and one of these was prohibited on the basis that the “school governing body … [should] arrange a meeting with the acting municipal manager and executive mayor to discuss [the] water problem”. Again, this is not a recognised ground for the prohibition of a march.

Also in 2010, a protest planned by the Valley View Flats Committee in eThekwini was prohibited because “an intelligence report said that these were actually members of Abahlali baseMjondolo attempting to protest under another name. The integrity of the application was therefore question[ed] due to the apparent misrepresentation and [the] march was not approved”.

According to Abahlali’s S’bu Zikode, the committee is affiliated to Abahlali but decides itself whether to protest and may ask the movement for support. The intelligence report clearly failed to comprehend this flow of decision-making.

More significantly, though, this shows that spies are involved in vetting protests, which points to a dangerous overreach of intelligence powers into the legitimate political organising of a movement that has been a thorn in the side of the ANC in the region.

In terms of the Act, there are grounds for the lawful prohibition of protests, especially if they are likely to result in violence and there is no other way of containing the threat. But the police must provide an affidavit to show this.

Most municipalities used this provision, although some cited the potential for violence without evidence of an affidavit having been provided. This provision is problematic, because it is one-sided: the convener never sees the affidavit and cannot contest its contents.

The Johannesburg Metropolitan Police Department (JMPD) profiles organisations. If protests have turned violent in the past, then they are less likely to allow protests by that organisation again.

Although this is understandable, it can also be problematic, because it can be used to deny the right to protest on the basis of previous conduct, even if conveners undertake to prevent violence.

For instance, a Congolese community burnt T-shirts bearing the face of President Jacob Zuma during their protest, which sparked xenophobic attacks by locals. This does not appear to be a sufficiently strong reason to ban future protests: the protesters could give an undertaking that they would not burn T-shirts.

It is also illogical to prevent a protest out of fear for the safety of the protesters, as the municipality did; rather, those who are threatening violence should be restrained.

In response to growing government concerns about the protests, there is evidence of municipalities having tightened their conditions on gatherings since 2012. In June, the department of co-operative governance issued a circular that outlined proactive measures that municipalities need to take to deal with protests. These included “[working] with the office of the speaker [and] public participation units to ensure ongoing engagement between councillors and communities and residents”.

Several municipalities used this memo as a pretext to change how they administered the Act. In Mbombela, for a service delivery protest to be approved now the conveners must prove that a meeting took place between the mayor’s office, the community and the ward councillor involved in that community to resolve the issue.

The municipal officer responsible will not even read or listen to the grievances of conveners who cannot show that “due process” was ­followed to avert the service delivery protest. But this prescription is not lawful.

The number of “approved” protests increased in Mbombela once the ­filtering process was introduced, ­suggesting that the potentially ­”troublesome” protests did not enter into the system.

But the municipality did admit that the condition had increased the number of “unrest-related” protests, taking place outside the framework of the Act. These were led mainly by individuals or organisations who were in dispute with the structures they were meant to negotiate with.

The police were also more likely to attack these protests as they were not involved in facilitating them in the first place and they were perceived to be “illegal”.

The JMPD also placed this condition on protests but exercised its ­discretion about whether to waive it or not because it recognises the fact that it may not be appropriate in all cases. Most gatherings that take place without notifying the municipality are service delivery protests and include protests where a disaffected group or an organisation does not have the locus standi (the right to appear and be heard before a court) to protest in the name of the organisation. These protests often relate to dissatisfaction with councillors.

But the JMPD claimed that many protests had been averted through its own initiatives in bringing the ward councillors and their constituencies together for meetings.

Some municipalities have identified the large numbers of gatherings and protests as a way to generate revenue and have begun to charge for police vehicles and police officers by the hour. The fee also covers cancellation costs, including the cost of stationery. The charging of such fees, even if it is discretionary, is entirely inappropriate as it makes the right to ­protest subject to financial means.

When the Goldstone Commission of Inquiry drafted the Act in the early 1990s, it could not have foreseen that local governments would have become the source of such grievances. This means that they have a conflict of interest in administering the Act, as they have a vested interest in stifling criticism of their own performance.

It is a testimony to the maturity of South Africa’s democracy that this conflict has not led to more widespread abuses of the right to protest.

But the research points to what the police would call “unlawful” protests increasing because municipalities are making it increasingly difficult to protest lawfully. The fact that violations of the right are on the increase, especially in those parts of the country where struggles are the most intense, makes the case for the Act to be reviewed.

The danger, though, is that in the current political climate it may be replaced with something far worse.

Professor Jane Duncan is from the school of journalism and media studies at Rhodes University. This is the second of two articles on protests and freedom of assembly, based on research funded by the Open Society Foundation for South Africa, and undertaken with the assistance of Andrea Royeppen and Lehlohonolo Majoro and a research team led by Derek Luyt.

Activists say if Roche does not drop the price of Herceptin, they will ask the health department to act.
Read more
Opinion

Who was behind the drone filming a protest march: a private cameraman, an award-aiming film-maker, the media, or intelligence gathering machinery?
Read more
Africa

A group of civil society organisations has delivered a 100-day ultimatum to the state calling for financial and electoral reforms.
Read more
National

Lesbians have all too frequently been attacked, raped and murdered in small towns – including Ermelo.
Read more
Advertising