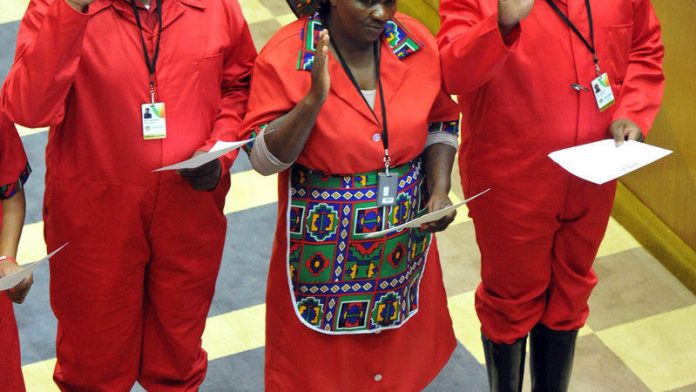 “These seats are rightfully ours. We are the rightful owners of everything in this Parliament, in this country, in this land,” shouted an Economic Freedom Fighters (EFF) member during a photographic session outside the National Assembly in Parliament on Wednesday.

The outburst came after Parliament staff and some ANC MPs asked EFF members to move from the front row of steps outside the National Assembly during the photo call, which included President Jacob Zuma and Chief Justice Mogoeng Mogoeng.

Following the first sitting of the National Assembly, which officially elected the president, speaker and deputy, a photograph is traditionally taken on the steps in front of the building. Yet on this occasion, there was a standoff for about 10 minutes as EFF MPs refused to move for senior ANC MPs and Cabinet ministers who wanted to occupy the seats in the same row as Zuma, Mogoeng and outgoing deputy president Kgalema Motlanthe.

Zuma and other senior MPs were the first to take their seats for the picture. Despite the fact that there were about 10 empty chairs next to them, a large number of MPs and ministers chose to stand behind the front row seats.

The EFF delegation, which arrived without Malema, were the last to turn up for the picture and moved to the front, where the seats were still vacant. During the standoff, the ANC MPs sang the popular chorus: “Umthetho wakho Awunambeko“, which loosely translated means “It’s in your nature to be discourteous”.

“Are you also expropriating the seats now?” an ANC MP shouted.

Some EFF supporters responded by singing in isiXhosa that “Zuma will soon be arrested, as he stole taxpayers’ money to build Nkandla”.

No vote
In Parliament, the EFF abstained from voting for the National Assembly speaker, the only position that was contested, which went to the ANC’s Baleka Mbete. One of its senior leaders Andile Mngxitama said they did not participate in the vote because it was “childish” to contest when the result was obvious.

“It shows the unfortunate immaturity and inefficiency and lack of seriousness that so much time is wasted on a foregone conclusion,” he said. “It indicates why in the past 20 years, this House has not been able to produce what in our view addresses the fundamental questions. We need a level of seriousness and efficiency for us to be able to deliver the kind of changes that are necessary for our country.”

The bright red overalls and domestic workers’ outfits worn by the EFF MPs to South Africa’s fifth democratic Parliament were intended to send a strong message to the nation. Hlengiwe Maxon, who came from Durban to be sworn in as a member of Parliament for the new party, said the workers’ dress will only be worn on special occasions.

“This is the dress of domestic workers,” Maxon said, holding up her red apron. “We are trying to tell people that we are from the Economic Freedom Fighters, we are here for the workers and the poor. We are sending a message to say that the Parliament for the people is not a Parliament for the elite. So the workers at home, when they see us dressed like this, they will know they are represented.”

EFF party leader Julius Malema removed his hard hat before he was sworn in as an MP, much to the relief of Mogoeng, who presided over the swearing in of 400 new and returning members of the National Assembly. “For a moment there, I thought you were going back to get your hat,” Mogoeng said to Malema, which got the House roaring.

Big occasion
In his knee-high gumboots and red overalls, Malema looked slightly humbled by the occasion, which was momentous for his newly formed political party. The EFF holds 25 seats in the chamber after winning 6% of the vote in the May 7 elections.

Malema formed the EFF following his expulsion from the ruling ANC in 2012 after a bitter fallout with Zuma, who was sitting nearby when his nemesis was sworn in as an MP. Described as a firebrand and a rabble-rouser, Malema generates headlines and is certain to provide some lively debate in Parliament.

One of Malema’s allies, Winnie Madikizela-Mandela, was given a rousing welcome by the EFF as she stepped up to be sworn in as an MP. Madikizela-Mandela was dressed in a full-length black dress, in keeping with the mourning she is observing for her late former husband Nelson Mandela.

Among the MPs who stood out for his determination to contribute to the country was Mario Oriani-Ambrosini, whose fiery battle with cancer has been well-documented. On this occasion, the Inkatha Freedom Party MP rose to his feet from his wheelchair to be sworn in.

Among the newcomers to become MPs were former leaders of the ANC in the Western Cape Lynne Brown and Mcebisi Skwatsha, and ANC national spokesperson Jackson Mthembu.

Future of the DA
The Democratic Alliance’s Mmusi Maimane, who is considered by many to symbolise the party’s future, stood up to be sworn in as an MP to loud applause from party members.

While others are old hands in Parliament, for Maxon Cape Town is a long way from her daughter, whom she left behind with her mother in Durban. Maxon is a former activist and she intends going out of her way to help grow the party. “When Malema was in the ANC Youth League and falling out with Zuma, I really supported him,” she said.

“I was following him in the build-up, when he was suspended and expelled. And I joined the EFF at its inception.”

Maxon said she was not particularly excited by her new role. “Not really, it is just work. We need our voices to be heard. We are new kids on the block and we have a radical approach. Most of the time I want to be out in the community, and continuing working and spreading the word about the EFF.”