Game of Thrones: Winter is here 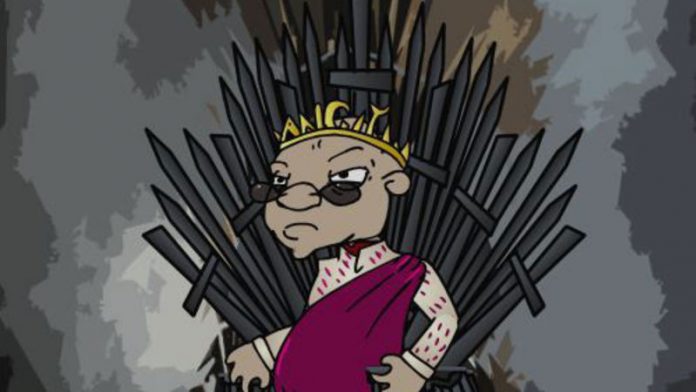 The grey wind sweeps across a faraway plain and greets the flesh with a bite from its icy mouth. A preternatural event or the ancestors’ rage – the cold returns to Azania. Five long winters is our penance; five years of misfortune where the wretched starve, the powerful thrive and the corrupt rule. Five more years of emptiness. Winter is here.

Flags of black, green and gold are swayed by the dance of victory, moved by the ghostly breeze. The House of Luthuli reigns eternal. Adored and despised, it is the head of King Jakob that wears the crown. From the frozen wasteland up north beyond the Wall, to the desert plains that stretch south, sinister forces are gathering. It is a time of sorcery and spin, of witchcraft and perilous dogma. A time of mad men and wildlings, of bastards and concubines.

King Jakob sits on the Iron Throne at Castle Nkandla, tucked safely among the rolling hills of Kingdom’s Landing.

Jakob, a complicated monarch who seized power from Thaborius, son of Govanion, rules with the aid of a merciless phalanx. The King’s Guard, led by Lord Nathis McThethwa, is feared throughout the kingdom ever since the massacre on Mount Marikana. On that day 34 peasant workers were slain by the Guard. Winter is here, and it will be the longest winter of our lives.

But even as marauding tribes eye Kingdom’s Landing, trouble roams the halls of the House of Luthuli. (It’s almost as troubling as how pretentious this parody is, but play along.)

Gwedion, Jakob’s dwarf uncle, is no stranger to mature wine and expensive women. Secretly he knows that Jakob is steering the House of Luthuli into the moat. Jakob is a spoilt little shit who must be stopped, but he is all-powerful and protected by the phalanx: Sir McMirage, the old dog of war; Lady Jessica, the seductive kingmaker; Lord Cyrilus, the ambitious arse-licker to the King.

King Jakob’s inept rule and corrupt royal practices weigh heavy on Gwedion’s low shoulders. But the dwarf’s loyalty to the crown and the house of black, green and gold has neutered him. Gwedion spends his days and nights wallowing in thoughts of what could have been had he been more statuesque. But Lord Cyrilus, the favoured son, will be king one day – probably sooner than we think.

Two feet taller and life would have been so different for Gwedion. His ascension to the Iron Throne would have been assured with power and riches at his fingertips. For the foreseeable future, Gwedion will console himself with more women than wine. He’s not the “God of tits and wine” for nothing.

In a new twist, King Jakob fired his King’s Guard leader Lord Nathis, not for fornicating with a sibling but for failing to erase from public scrutiny the true horror of the Massacre on the Mount. For this, Nathis was banished to the crown theatre where he was forced to spend his days fraternising with homosexuals and eunuchs. (Disclaimer: We know this is derogatory but we’re pleading the Yoweri Museveni amendment on this one.)

Meanwhile, at Castle Nkandla, the birthplace of King Jakob, the royal wives pace the underground bunkers of the compound nervously. Castle Nkandla houses the Iron Throne and it is the most guarded in all the land. But outside the castle walls, danger lurks.

The stench of poverty draws ever closer and hangs thick in the air, like the morning fog. Children risk disease as they play near the rotting carcasses of beasts slaughtered in the name of the king. The people are hungry and displeased with their meagre existence, but they are learning the truth; word has begun to spread and the king’s ways are being questioned in hushed tones around the castle walls.

Armies are marching towards Castle Nkandla to take the Iron Throne. No amphitheatre or chicken coop can stop the bloodthirsty tribes, but a fire pool – just maybe. A raid on the store belonging to the king’s first wife would be calamitous for the crown.

Far south of Kingdom’s Landing, beyond the Kei River and the dusty plains of the Karoo, the burgeoning tribe of the dragon lady Helena Zilleryen plot to overthrow the House of Luthuli.

The Zilleryens are an ancient tribe of pale skinned people. They sip the juice of the vine and enslave canines, felines and the unsullied. Helena Zilleryen, Queen of the House of Dragons, believes in her heart that the Iron Throne and house maidens are hers by birthright, but she needs an army to unseat King Jakob. Her band of disgruntled minorities will not be enough to conquer Kingdom’s Landing. But Helena, queen of the Zilleryens, has in her possession two very special gifts from her ancestors: black baby dragons.

Helena has hand-reared and occasionally suckled her dragons from birth. Lindi and Mmusi were Helena’s secret weapons; her Trojan horses even before Troy existed. They were her creations, with which she planned to take the Iron Throne by incinerating the enemy. That is until Lindi grew a mind of her own, began hunting on her own, and spread her wings without approval. Helena was incensed by Lindi’s behaviour and banished her into the wilderness across the seas, never to be heard of again.

Mmusi, however, obeyed Helena’s every command. He dared not question his owners judgment, for he now fights at her right-hand side blowing more hot air than flames.

The Zilleryens march forward to Castle Nkandla, determined to bring a black face to the fight. Winter is here, and it is the winter of our discomfort. (Oh c’mon, is this a parody or the missing gospel of the Bible?)

But in the north of the country is where the battle truly manifests. Lady Thuli, Protector of the Public, believes that all men and women are the same. To her, a king and a peasant are both equally corruptible – blasphemy in these times.

The House of the Public Protector maintains the peace. It brings order and sanity to an otherwise random series of political plots, subplots and sporadic bouts of benevolence. For a playful king, Lady Thuli is a nuisance, a fly in the royal soup and a lint ball in his navel.

Lady Thuli professes to know the truth about King Jakob’s ways, his medieval secrets, and unsavoury behaviour. If the beheaded could speak they would say that such dangerous knowledge should never be uttered. But Lady Thuli is no ordinary human being. She was born into a prestigious clan of officers known as the Night’s Watch. The Night’s Watch guards the country against the ruthless House of Luthuli, the volatile dragon lady Helena Zilleryen … and the wildlings from the North – a band of warriors for economic emancipation.

The wildlings, which rose up from the banks of the Limpopo River, strike fear into the hearts of Kingdom’s Landing, and the people of Castle Nkandla in particular. The wildlings kidnap the first born of every family in Azania as part of a gruesome nationalisation ritual. The wildlings are feared throughout the land and the House of Luthuli appears powerless to act.

The leader of the wildlings Juju Melanoma was himself a member of the royal house in Kingdom’s Landing until he outlived his usefulness. King Jakob disposed of Juju like an old bathtub after showers were invented. Taking the Iron Throne would be the ultimate revenge for Juju and his merry men in overalls. But Juju owes a great debt to the Coin. His days of largesse as a member of the royal family, when he paid for nothing, have come back to haunt him. He made money by exploiting his connection to King Jakob, and now that he has fallen out of favour, the Coin wants its gold back.

For the moment, Juju has evaded the Master of the Coin and the red army marches on towards Kingdom’s Landing where Juju hopes to one day fit into the most uncomfortable seat in the world – the Iron Throne. (Seriously, people are dying for an Iron Throne?)

But King Jakob will have none of it. Buoyed by the confidence shown in him by his pliable royal subjects, he has reinforced his phalanx to include every single man he could possibly buy. They will fight for him, they may kill for him, but few will die for him. Loyalty is a dish best served with gold.

Winter is here. And it is the winter of our incontinence.

Adrian Ephraim
Adrian Ephraim is a journalist and editor who has worked in print, radio and digital over the past 20 years – for The Star newspaper, IOL, Mail & Guardian and Eyewitness News. He has covered sport since 2005, when he won the SAB Newcomer of the Year Award. His work has focused on human interest stories in news and sport, and the triumph of hard work and determination over adversity.
Facebook
Twitter
WhatsApp
Linkedin
Email
Telegram