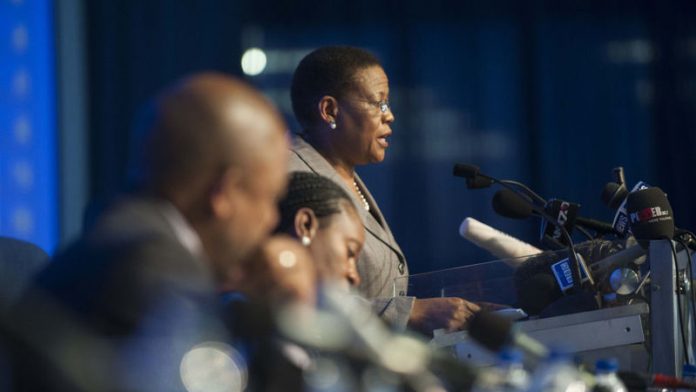 Independent Electoral Commission (IEC) chairperson Pansy Tlakula cannot be punished for misconduct before she was appointed, the Electoral Court heard in Johannesburg on Wednesday.

“We submit that any conduct before appointment cannot be taken into account,” said Daniel Berger SC for Tlakula.

Judge Lotter Wepener asked – if this was the case – whether a breach of the rules after a commissioner’s tenure would equally amount to misconduct.

“After? Can you do [an act of misconduct] with impunity?”

Berger replied that a former commissioner would then possibly fall foul of other laws, but not misconduct, if his or her tenure was over.

Application for resignation
The court is considering Tlakula’s conduct after an application by some opposition parties to have her resign as IEC chairperson.

They brought the application before the May 7 elections.

The parties are the United Democratic Movement, the African Christian Democratic Party, the Congress of the People, Agang SA and the Economic Freedom Fighters.

The matter was initially postponed on May 2 until after the elections as the court did not have enough time to make a recommendation.

The application followed a forensic investigation by the national treasury into the procurement of the IEC’s Riverside Office Park building in Centurion.

The probe found that the process was not fair, transparent or cost-effective. Tlakula did not give guidance or formally inform various people of what was expected of them in the process. Tlakula has maintained that she was not accused of corruption in the report.

Public protector report
The treasury’s report followed a recommendation by public protector Thuli Madonsela in her report into the matter, which she released in August 2013.

Tlakula was the chief electoral officer at the time of the complaint.

Berger submitted that the court should only consider arguments against Tlakula’s actions as outlined in the parties’ founding affidavit and in the reports of the public protector and the treasury, as these formed the basis of the application.

Claims by the applicants to the effect that Tlakula was dishonest and had a dismissive attitude towards the court should not be entertained.

“It is not proper to have this character assassination … When that is not the complaint before court,” he said. – Sapa