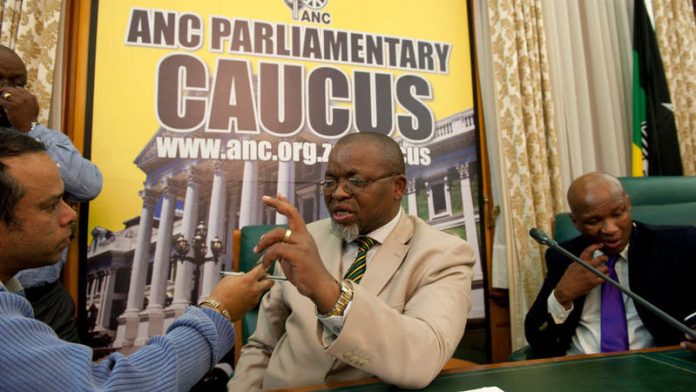 ANC secretary general Gwede Mantashe reiterated the controversial statements he made earlier in the week about foreigners’ influence on the mining strike negotiations.

In fact, Mantashe seemed to have hardened his stance on the matter, warning that economic sabotage could not be ruled out when South Africa allows a free for all approach in such a matter. “Not everybody is a friend of South Africa, nor is everybody a friend of the ANC.

“If you allow a free-for-all, the risk of economic sabotage becomes real because you will have people of all political persuasions, coming to the country and begin to see agitation in a country.”

Mantashe said as a political activist, he does not rule out the question of international interests wanting to see the Arab spring in South Africa. “And they [foreigners] will use any entry point to actually deal with country,” he said.

“It will happen to us if we are reckless and we allow things to go as they can and people do as they wish.”

Xenophobic rhetoric
He said the ANC was worried and raising an issue, and that it is unheard of when international organisations that are in solidarity with a labour union lead negotiations physically. He said this is never done.

“It’s the first time we see it.” Mantashe said his statements were neither xenophobic nor propelling a wit gevaar, as the Association of Mineworkers and Construction Union (Amcu) president Joseph Mathunjwa and the Business Day reported earlier this week.

“[But] we saw foreign citizens from countries we know, we have identified four people from different countries who are actually right in the negotiations of Amcu and basically articulate the position of Amcu in public.

“I would like to go to Germany or London and lead negotiations, but I can tell you that I will not be allowed because collective bargaining has conventions. Others are written and others are not written.”

He said one of those would be a recognition agreement, which gives you particular rights, and those rights are not given to anybody, but to a union. He described South Africans as “naïve enough” to believe that they are the darlings of the world and to think that people had their interests at heart.

Mantashe said it was important for shop stewards of a union to lead bargaining because if they are not involved, people who are having the comfort of earning their salaries from somewhere else can drag that strike for a year.

‘The big issue’
“What worries us about that strike is a question of all these outsiders articulating the position of Amcu without the visible presence of Amcu shop stewards. That is the big issue.

“But shop stewards will know that, we are now having members that are starving to death because they themselves as shop steward will not be earning for five months, and will be able to guide a strike.

“Outsiders who are earning and who are living in comfort can drag it for 20 years, because it doesn’t impact their own living. That is the issue we are raising with that strike,” said Mantashe.

The ANC also warned the newly appointed minister of mineral resources, Ngoako Ramatlhodi, against being a mediator and arbiter in the negotiations, saying there are structures that are set up for that purposes.

“It is not done that way. Ministers must do their work, ministers are not mediators nor should they be arbitrators.”

The ANC welcomed Ramatlhodi’s pulling back on the matter.

“We think it’s the right thing to do. The minister must intervene at a particular level but must not absorb the pressure of the bargaining process as if a minister is an arbitrator or a mediator.”

“If people feel so threatened that they can’t go to work, even when they are starving and can’t take their antiretroviral drugs because they have no food … it becomes a national issue and therefore should be looked into broadly as more than just a small strike.”

He said seeing an end to the strike had become a priority in the ANC, as the strike was beginning to impact on the performance of the economy in a big way. “We don’t say it is solely responsible for 0.6% negative growth that has been registered, but the sector has made a major contribution, quite an important sector in our economy [because] we are still by and large a mining economy.

“If your platinum sector is not producing for five months, that will impact on the overall performance of the economy,” said Mantashe.

‘Amcu congress will show that union is democratic’ — general secretary