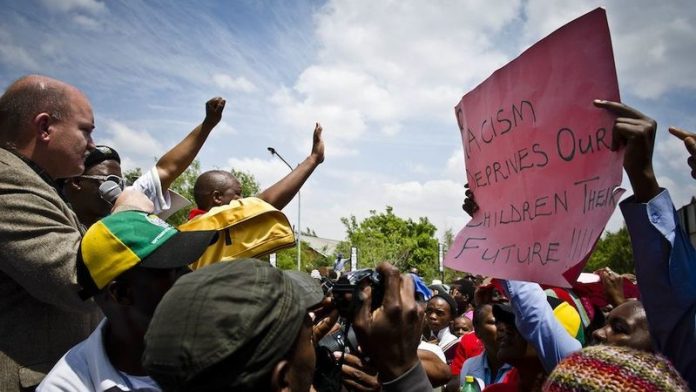 Fred Khumalo is right about race being the elephant in white rooms ( No ‘darkie’ sarcasm in the class struggle). Many whites are now eager to deny race because they are ashamed of apartheid and what they, or their parents and grandparents, were ready to accept until, despite themselves, white supremacy eventually gave way in 1994.

Similarly, Mail & Guardian columnist Nikiwe Bikitsha is right when she says that opposition to affirmative action speaks of desperate attempts to retain the white privileges of apartheid (Affirmative action does not kill babies). But Khumalo and Bikitsha are also both wrong.

What they don’t seem to recognise is the second, even larger elephant in the room – an elephant that the privileged of all “races” prefer not to see. Despite the reference to class struggle in the title to Khumalo’s piece, “class” is less threatening than “race” only when it is reduced to a neutered social category entirely outside of any understanding of what is properly meant by class struggle.

The class of class struggle is much more than just an objective measure of poverty or wealth, of inequality or economic power.

Khumalo writes: “It is no accident that the majority of the people who are poor are black. A racial oligarchy designed it that way. To change the class situation you will need to educate and empower the majority – a project that will take maybe another century, or even more, to realise fully … The gap between rich and poor is still driven, largely, by race. There are white people who [don’t] have to raise a finger to find themselves smack in the lap of luxury. They were born into it. Race determined their class situation.”

This, it must be said, is a decidedly impoverished understanding of class. It is also the most widely used.

If post-apartheid South Africa was the only developing country marked by poverty, inequality and unemployment and, moreover, the only country worldwide where, in Bikitsha’s words, “economic power still rests in the hands of a minority”, all this would be powerfully persuasive of racially determined classes.

The very opposite happens to be true. All countries are marked by poverty, unemployment, inequality and the concentration of economic power. What distinguishes one country from another is only the form and extent of these universal class contours of capitalism.

Privilege automatically reproduces privilege in the same way that poverty is passed on from one generation to the next. Both privilege and poverty begin even before the appearance of the fertilised egg that becomes each new person.

The subsequent inequalities of each particular society shapes the individual specificities of the experiences and opportunities – for both good and ill – of everyone, in a myriad different ways, until death.

Khumalo is therefore wrong when he says that it will take a ­century or more to change our racialised class pyramid, in which blacks form the base. The black base will never change for as long as we have class divisions. For as long as we have capitalism, our workers, poor, ­unemployed and otherwise marginalised, will be black.

Where Khumalo is right is when it comes to our rich. Here, the exercise of black political power will ensure black enrichment; it is just a matter of time.

No ruling class voluntarily commits suicide by freely disappearing after meekly handing over all its wealth and privileges. This is where Bikitsha’s “social re-engineering” comes in. Only political power makes such re-engineering possible.

Affirmative action is precisely the form of social engineering we are now experiencing. Affirmative action, however, takes place firmly within the existing class structure. Rich and poor will still be reproduced: the only change will be the increasing, though still slow, multiracial transformation of the rich.

Apartheid South Africa was indeed a standard capitalist class structure made (almost) unique by the fact that its class divisions were prescribed by law on the basis of what we still choose to call “race”. Race prescription has now gone with the demise of apartheid, but the class cleavage of South African society still appears unchanged in its colour-coded apartheid form. We are predisposed to seeing a racial cause in this form, because the racial identities of apartheid remain deeply entrenched in our consciousness – as, now, our freely chosen self-identities.

Notwithstanding the perfectly clear definition of “black” in the affirmative action legislation (the 1998 Employment Equity Act or EEA), all affirmative action data ignores the EEA by reproducing all the apartheid-invented races: African, coloured and Indian.

Add the still-powerful tribal identities and the more recent xenophobic sentiments to the brew and, whether by accident or design, this serves to perpetuate the fragmentation of South African society.

Which brings us back to the “class struggle” of Khumalo’s headline. The elephant here is not class as a safe, descriptive term, but rather as a permanent, organic struggle between the classes of capitalist society. At stake is nothing less than the preservation or overthrow of that society.

Deep divisions within the working class ensure the safety of the status quo. A recent example of how these divisions are manipulated is provided by Gwede Mantashe, the ANC’s secretary general and a former leader of the National Union of Mineworkers. He sought to undermine a dramatic manifestation of the class struggle – the longest mining strike in South Africa’s history, a strike by 70 000 workers – by blaming four white foreigners for it all.

The tale of elephants is rich in irony. The irony of rich whites championing class as the safe alternative to colour is matched by the class of upwardly mobile blacks championing colour as the most secure route to the formerly all-white class of the rich.

Regardless of colour, the rich and powerful have the same class interests: class is best kept hidden; rather expose the coloured elephant.