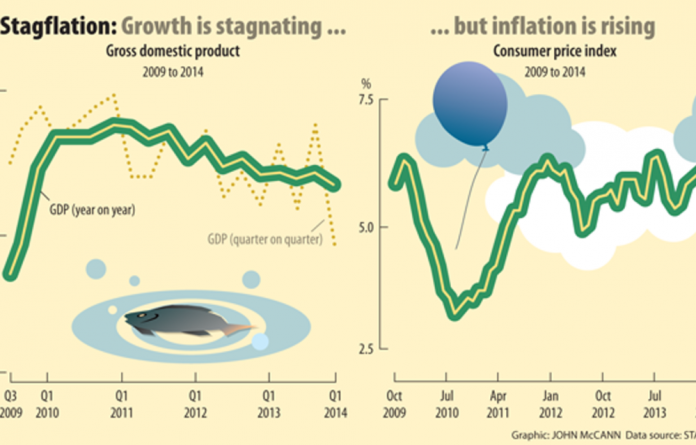 The spectre of stagflation is stalking the economy, with some economists saying that the country is already in a “stagflation trap”. Stagflation is characterised by low economic growth, low domestic demand and rising inflation.

According to Chris Hart, the chief strategist at Investment Solutions, South Africa is in a “stagflation trap”; economic growth has been drifting downward since 2010. During the same period, inflation has been persistently close to the upper band or outside of the South African Reserve Bank’s target range, he said.

This year, the country’s economy shrank by 0.6% in the first quarter and inflation broke through the bank’s target band of 3% to 6%, reaching 6.6% for the month of May, well up from 6.1% in April.

He said there have been other warning signs, such as low growth at the bottom of an interest rate cycle. Hart said South Africa has been cutting interest rates for some time but growth has continued to drift down.

In addition, he said, the current account deficit, usually associated with an economic boom, is “enormous”. It grew from 5.2% of gross domestic product (GDP) in 2012 to 6.1% in 2013, according to the Budget Review, although it fell sharply in the first quarter of 2014 to 4.5%, according to the most recent Reserve Bank figures.

The strain on the government’s finances is another warning sign, Hart said. Following the recession, the government embarked on countercyclical spending to support the economy, increasing its expenditure and taking on more debt. But, in the current slowdown, the government could not sustain this by raising taxes, as households’ finances “were also in tatters”.

The bank’s governor, Gill Marcus, warned in April of the dangers of a low-growth, high-inflation environment.

The bank has also said that the country is in an upward interest rate cycle, particularly in the light of a weak rand putting pressure on inflation.

He said the pressure from inflation came from higher soft commodity prices and a weak rand forcing companies to increase prices in spite of weak demand.

He said the Reserve Bank is expected to hike interest rates incrementally in the second half of the year, by a total of 50 basis points, in order to get inflation back to within the target range and maintain credibility.

The economy was experiencing mild stagflation, said Els, but he warned that a protracted strike in the manufacturing sector could “cripple” it. Although 220 000 people are on strike, 350 000 are not going to work because of lockouts – roughly 6% of the formal sector workforce and five times the number of people involved in the recent platinum sector strikes.

The production lost is likely to be significant, he said.

“If the strike lasts, there will be a substantial amount of lost wages, which will have an impact on consumer spending and household balance sheets,” Els said. “This, in turn, could affect the banking sector through rising impairments.”

The strike would also affect the industries that supplied or consumed good from the manufacturing sector, he said.

Manufacturing, which accounts for nearly half of exports, would be affected almost immediately because the sector tends to keep inventory levels very low, unlike the platinum sector where the mines could draw down on inventories and cushion the effect on exports, Els said.

Weak manufacturing export performance could have negative consequences for the rand exchange rate, which in turn “could push inflation higher and force the Reserve Bank to hike interest rates more aggressively than is currently anticipated”.

“The net result is that, if the strike lasts for a large part of the third quarter, there is a risk of negative GDP growth in that quarter,” he said.

The stagnation being experienced was unlikely to improve without a substantial upturn in global demand, argued Ian Cruickshanks, chief economist at the South African Institute for Race Relations.

There is a silver lining

With the signs of stagflation writ large over the economy, are there any bright spots in the gloom?

According to Nico Els, the portfolio manager of Ashburton Investments, South Africa is in a uniquely favourable position with the rand being weak when global growth is expanding.

“This means that South Africa has the opportunity to grow exports strongly,” he said.

“In those sectors which have not been significantly affected by labour unrest or infrastructure constraints [such as electricity or port capacity], we have seen an impressive rebound in export growth recently.”

Meanwhile the FNB/BER consumer confidence index, released on Wednesday, rose from minus six index points to four in the second quarter of the year, the highest since the third quarter of 2011 and just shy of the long-term average of five index points.

The uptick in confidence reinforced the view that the slowdown in household spending has not been as dramatic as the recent deterioration in overall economic growth in South Africa, FNB chief economist Sizwe Nxedlana said in a statement. – Lynley Donnelly