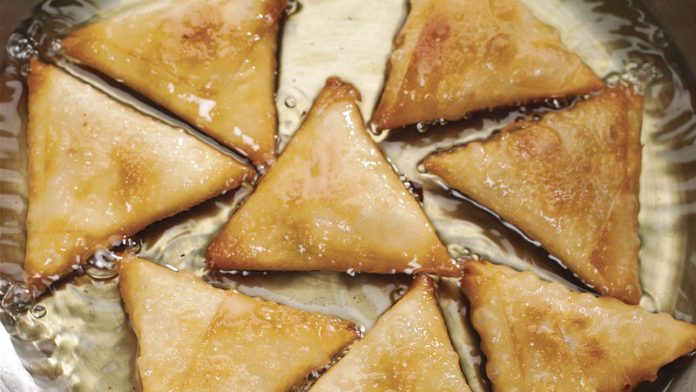 The Muslim fasting month of Ramadan began this past weekend. Wherever it’s observed around the world it’s a month of giving, and sharing, and extra prayers, earnest supplications to God and much recitation of the Qur’an.

But beyond the faith-based additions to the month, there are also specific culinary delights associated with it in different countries. Dates and water are usually the first course on any Iftar menu, because the Prophet Muhammad instructed his followers to break their fast with these items. But beyond that, what Muslims eat at the time of breaking their fast will usually depend on their culture.

Here in South Africa, in most Indian Muslim homes, there’s haleem, a nutritious broth, with naan bread, and milkshake. And there are samoosas – lots and lots of them.

No, not the big, fat, ready-to-eat triangles overflowing with onions and oozing with oil that you can buy over the counter at many shopping malls. I’m referring to the bite-sized triangle, neatly folded to fit in the palm of one’s hand.

Or more eloquently described by Zuleikha Mayat, the editor of Indian Delights (a recipe book first published in 1961), as “the perfect triangle, bulging just enough with the filling that will not mar its shape (not bloated as if ready to burst out from casing), which needs just a tinge of chutney or drop of lemon juice”.

“Some atrocities are palmed off as samoosas,” says Mayat, who is over 80 years old, “But this is the ‘real McCoy’.” According to her, from 1930 to 1945 samoosas only featured on the Ramadan menu on special nights, and on the day of Eid ul-Fitr (breaking of the Ramadan fast).

“Slowly its popularity and improvement in finances led to its entrenchment over time as the twin of haleem,” she says.

Dozens and dozens
My mum fries an average of a dozen samoosas a day during Ramadan for our family of four, which means our freezer is stocked up with around 30 dozen ahead of time. That may seem like a lot until you compare it with the 70 dozen that are painstakingly made in my friend Maryam’s house, where samoosa preparation is a hands-on affair.

Maryam’s mum makes the pur – the pastry that encases the filling – herself. She also fills each narrow strip of pur, and Maryam and her sister seal the filling in with a smooth flour-and-water paste. Like me, Maryam has never mastered the intricate art of filling samoosas.

It’s all about the corners, Bibikhala, my mum’s 83-year-old aunt, tells me as she effortlessly creates a tightly packed triangle.

It’s April, and Ramadan is still about two months away, but in keeping with tradition, Chotikhala’s daughters have come to her house to fill their samoosas for the fasting month. The table is cluttered with strips of pur, bowls of mince filling and paste, and containers into which the completed samoosas are packed for freezing.

One way or the other, these women have mastered the art of filling samoosas. Some of them make a little cone at the top of the strip, and briskly pop in two teaspoons of mince before folding it into a triangle. The others simply pop the mince on to the strip, extend one corner over the other and make the triangle. Either way, the end result is something I am deeply envious of.

“Samoosas must be filled with pride, point to point,” says Chotikhala, whose years of exertion in the kitchen have possibly – by her own admission – contributed to her osteoporosis, which means she can’t “stand and fill” as she’d like to. “In our times things were different – Ma said, ‘Can it be called work if you sit and do it?'”

But over time things have changed in more than one way. Whereas previously the default was a mutton mince filling, these days chicken mince, potato, and cheese and corn are also popular, and the more adventurous even opt for tinned fish. Today the more health-conscious may also bake the samoosas instead of frying them.

Time-consuming
Before her health got the better of her, Chotikhala used to make her own pur. These days she buys it from one of hundreds of women around the country who make their living selling pur on its own, or samoosas, or filling samoosas for housewives who don’t have the time to do so. You can buy homemade samoosas at anything ranging from R20 to R40 a dozen. All you have to do is freeze them, and fry them when needed.

“With extended families a thing of the past and many women handling both home and career, time-consuming samoosas are ordered from persons who sell you the pur or the finished product,” says Mayat. “This ordering has empowered many women. The ones that make the pur are really running an industry – [some of them] employ assistants; and try and place an order a month before Ramadan and you will be turned down.”

But filling samoosas is more than just about food preparation. It’s also a tradition that brings women from different generations together to chat about the old days over a table. It’s for this reason that my cousin Fathima Simjee, a doctor, buys her mince samoosas, but makes her cheese and corn and potato ones at home.

“My mum, my nieces, my daughter and my sisters and I get together – it’s a warm and intimate social affair, where we sit and fill and listen to stories about the old days. In our modern times, it serves as a connection to our roots. It’s my idea of not losing a tradition, that’s why I do it. And filling samoosas is also an art form we don’t want to lose.”