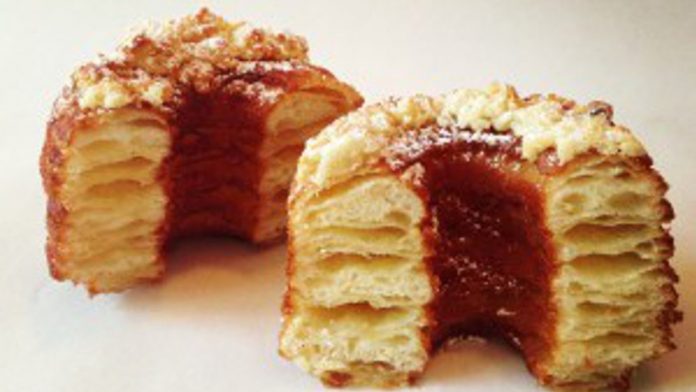 Not even an infestation of mice could keep the lines out of the  Dominique Ansel Bakery in Soho, New York, away for long. Sure, people stopped queuing for the weekend that the department of health and mental hygiene shut the place down – giving the French pastry chef and his small team the chance to sort their kitchen out. But as soon as the bakery reopened, hundreds of people were outside, forming the lines that have become a fixture in downtown New York ever since Ansel introduced the pastry known as the cronut last year. Enthusiasm for quirky food items, it seems, is not waning.

Not since Carrie Bradshaw shared cupcakes with her bestie Miranda outside Magnolia Bakery in Sex and the City has a trend like the cronut quite captured the public’s imagination, and collective sweet tooth. A cross between a croissant and a doughnut, it has made people queue from 4am and even hire professional line-waiters to try one of the few dozen that are prepared fresh every day.

But it’s about more than just the novelty of a food mash-up. In a time where belts continue to be tightened economically, many foodie enthusiasts still seem willing to loosen their physical ones to try something new.

The cronut, trademarked by pastry chef Ansel, continues to inspire knock-offs around the world, where it can be bought as a “doughssant” or a “croughnut”. In an attempt to boost business, Crumbs Cupcakes planned to send out a new product into supermarkets in the US, called the “crumbnut”, in the hopes it would help intrigue those who are looking for more than the usual cupcake. But the chain was forced to close its 48 stores, abruptly this week, as a result of falling sales and poor stock performance.

Cupcake ATM
Crumbs opened so many stores in the US that it ended up competing with itself. Sprinkles, which has a smaller footprint, decided to compete in its own way – with the introduction of the cupcake ATM. Stocked with the brand’s signature cupcakes, which are meant to be available 24 hours a day, cupcake ATMs can be found in six cities in the US, now including New York City. Sugar addicts willing to pay $4.25 a pop can satisfy their urges any time of the day or night – something Sprinkles co-founder Candace Nelson found she couldn’t do when she was pregnant and craving a cupcake at 3am.

Queues outside the cupcake ATM resemble the ones that formed in Smorgasburg, the summer weekend food fair in Brooklyn, when the ramen burger (think burger in a bun made of two-minute noodles) was introduced last year. It’s become as much about the experience – and being able to Tweet and Instagram that – as the food itself. “Shopping and dining is as entertainment-focused as ever,” says Nelson’s partner, Charles. And he should know, Fortune estimates that the cupcake ATMs bring in an extra $9-million a year in revenue for Sprinkles.

Other restaurants are trying to offer a point of difference, too. Red Robin, the US equivalent of Spur, is about to start selling wine milkshakes after its initial offering of beer milkshakes in 2012 went down so well.

“It is absolutely a share battle,” senior vice-president Denny Marie Post told Fortune. “Casual dining [restaurants] back in the nineties, you couldn’t put them up fast enough, but then the category got overbuilt and hit the skids in the recession … We can all carry craft beers and make great food, but it’s those little things that could make the difference in someone coming back or not.”

This is something even Ansel has kept at the back of his mind. At this year’s South by South-West festival in Austin, Texas, he unveiled his latest creation: a milk-and-cookie shooter. But the novelty of throwing back a shot of milk and then eating the cookie it came in has not taken off quite as emphatically as he had hoped just yet. Luckily for him, he still has those cronut lines.