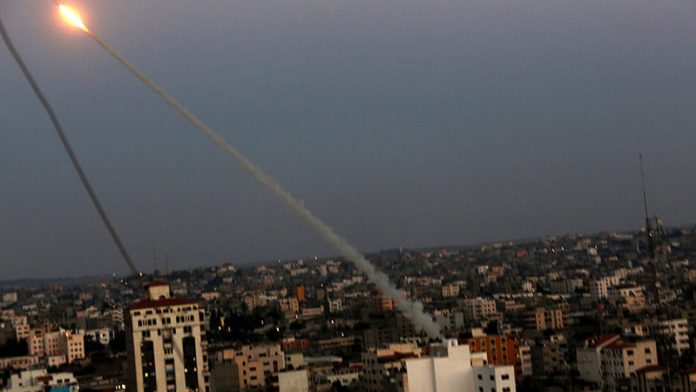 What is Iron Dome?
Iron Dome is the air defence system Israel uses against rockets fired by Hamas from Gaza. On Tuesday, 117 rockets struck Israel, 45 of them targeting major cities, including Jerusalem and Tel Aviv, as well as Hadera, 115km to the north.

The Israeli army said the Hadera strike was the furthest that a rocket fired from Gaza had ever reached. Another 45 missiles were shot down by Iron Dome, which is designed to intercept rockets fired from 5.4km to 69.4km away.

How does it work?
First a radar scans an area for a ballistic motor or rocket. When it detects the missile, Iron Dome’s software can determine its location and type. The radar tracks the rocket as it is fired and predicts its trajectory.

If it is determined that the rocket will hit a protected area, where there are large numbers of people or something strategically important, it will be intercepted.

For short-range rockets, that decision will be a split-second one. Tamir interceptor missiles are then fired from launchers on the ground. An interceptor can act independently even if it loses communication with the ground because it has its own sighting systems.

Each interception rocket costs around $95 000 so Iron Dome is not used against missiles heading for open ground.

How successful is it?
During Operation Pillar of Defence in November 2012, when Israel clashed with Hamas, 1 500 rockets were launched from Gaza at Israel. According to figures provided at the time by the Israel Defence Forces, Iron Dome destroyed 426 rockets, with a successful interception rate of 84%.

Israeli officials hailed Iron Dome as a “game-changer” that saves lives, describing it as “an extraordinary home-made rocket swatter”. Some have questioned whether it is as effective as claimed, but Time magazine’s defence expert, Mark Thompson, says the “lack of Israeli casualties suggests Iron Dome is the most effective, most tested missile shield the world has ever seen”.

Are changes planned for Iron Dome?
Rafael, the Israeli defence company that developed the system, says it is being improved. An official for the company told IHS Jane’s Defence Weekly in April: “There is something in the pipeline, both in terms of hardware and software improvements.

“I can’t say exactly what these are or when [they might be rolled out], but we are in a kind of race [with the Palestinian rocket firers] and we always need to update [the system].”

Rafael has also collaborated with US firm Raytheon to develop a related defence system known as David’s Sling, which is intended to stop rockets with ranges of between 72km and 320km. Iron Dome receives $176-million in annual funding from the United States; but the House of Representatives voted in May to double the amount. – © Guardian News & Media 2014