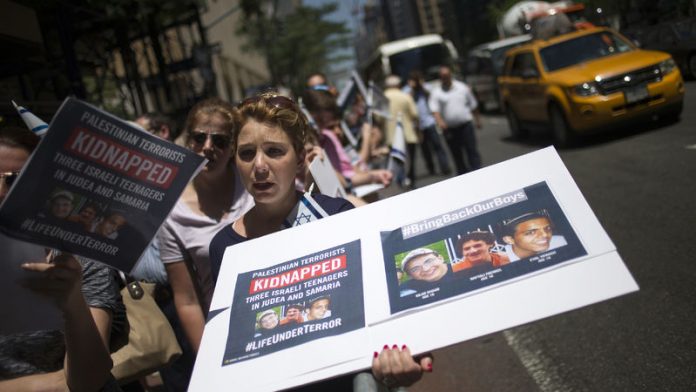 The UN Security Council called on Saturday for a ceasefire in hostilities between Palestinians and Israelis and expressed serious concern about the welfare and protection of civilians on both sides.

“The Security Council members called for de-escalation of the situation, restoration of calm and reinstitution of the November 2012 ceasefire,” said the 15-member body.

Israel rushed an eighth missile interceptor battery into service on Saturday to counter stronger than expected rocket fire from Gaza as the military pounded positions in the Palestinian enclave for a fifth day.

The most recent hostilities were sparked three weeks ago by the kidnapping of three Jewish students in the occupied West Bank, who were later found dead. A teenage Palestinian was then kidnapped and his burned body found in a Jerusalem forest.

The United States, a close ally of Israel, and Jordan were unable to reach agreement on a Security Council statement on the crisis earlier this week, diplomats said. Council statements have to be agreed by consensus.

Palestinian UN ambassador Riyad Mansour accused the council of dragging its feet and said Saturday’s statement had only been agreed after the Arab Group, the Organisation of Islamic Cooperation and the Non-Aligned Movement threatened to push for a resolution on the issue.

The Security Council statement also expressed “support for the resumption of direct negotiations between the Israelis and Palestinians with the aim of achieving a comprehensive peace agreement based on the two-state solution”.

Western input
British Foreign Secretary William Hague said on Saturday that he would discuss with US, German and French foreign ministers the need for a ceasefire between the Palestinians and Israelis when they met on Sunday for talks on Iran’s nuclear programme.

“It is clear that we need urgent, concerted international action to secure a ceasefire, as was the case in 2012. I will discuss this with John Kerry, Laurent Fabius and Frank-Walter Steinmeier tomorrow in Vienna,” said Hague.

The ministers are due to hold talks on Sunday afternoon in Vienna to take stock of negotiations with Iran over its nuclear programme ahead of a self-imposed July 20 deadline to secure a deal.

“The current crisis only underlines the need for a fundamental transformation of the situation in Gaza,” Hague said after speaking to Palestinian Authority President Mahmoud Abbas and Israeli Foreign Minister Avigdor Lieberman.

Hague said issues that needed to be addressed included “the restoration of Palestinian Authority control, the opening up of legitimate movement and access and a permanent end to the unacceptable threat of rocket attacks and other forms of violence from Gaza against Israel”. – Reuters