A lover of dirty, smelly and unsightly architecture 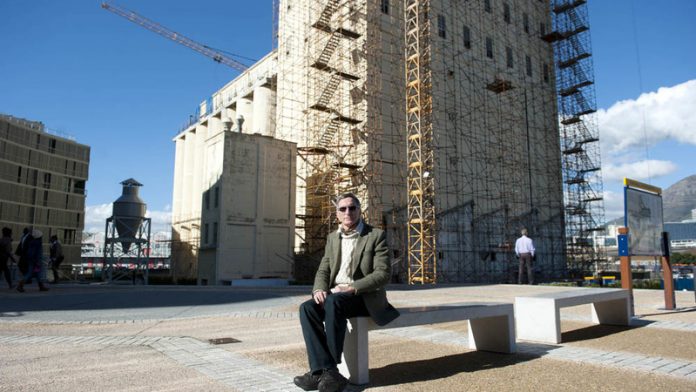 It is a familiar compromise among the middle classes. The thing you love, let’s say beekeeping, just doesn’t offer a bankable career, so in its place an unexciting but paying job. As for the African honeybees, well, they get nurtured in one’s spare time with the devotion of an amateur.

Recently, when he was invited to a weekday ceremony inaugurating the extensive overhaul of Cape Town’s defunct grain silo complex into a contemporary art museum, a building he has extensively studied and been consulted on, Worth had to put in for a day’s leave. He had no option. By day, Worth is a finance manager at the University of Cape Town.

When Worth joined the university in 1997, he initially worked in both multimedia education and with a group researching the archaeology of Cape Town. Now, though, he works full-time at the Centre for Higher Education Development, where his duties include helping foreign students to come to Cape Town on research trips.

But it is his other vocation, the one he keeps a separate business card for, that is intriguing. His business card features a prominent illustration of Cape Town’s eggshell-coloured grain silo. He began visiting and studying the building in the mid-1990s. His 2004 doctoral thesis offers a passionate recapitulation of its origin and purpose.

Grain silo
Designed by Canadian engineer William Littlejohn Philip and built in the early 1920s, the grain silo, once the nation’s tallest building, is an important physical marker of South Africa’s industrial history. Part of a national scheme to diversify the country’s mineral-based export economy, the Cape Town silo, and its twin in Durban, was connected by railway to 32 feeder silos in far-flung places such as Kroonstad and Ventersdorp. Worth visited them all once in a two-week, cross-country dash.

Similar to Eskom and Iscor, two modernising industries founded around the same time, the interconnected grain export system was a state-owned utility. Like its dirtier cousins, it also played an important role in shoring up the defences in the battle against white unemployment.

Not that any of this is immediately evident when you encounter the disused silo, which is currently being retrofitted to British designer Thomas Heatherwick’s specifications for its March 2016 opening as the Zeitz Museum of Contemporary Art Africa.

A picture of when the V&A grain silo was in use.

This is to be expected. History is a latent thing and buildings are, in the main, mute props. Animating their significance in our lives requires a good storyteller, which, in his own way, Worth has become over time.

It is a wet Saturday morning when Worth enters Lady Bonin, a bohemian teashop in Woodstock. A transplanted Londoner who arrived in Cape Town in 1984 aged 29, he knows the area well, like a tongue knows the contours of a mouth. His 2004 doctoral thesis included a substantial chapter on Woodstock’s former gas industry. Writing elsewhere, Worth once gaily described the gas works as “a wonderful example of a dirty, smelly, unsightly and uneconomic industry”.

Industrial residue
The only residue of this industry, which flourished for nearly a century amid the speculative row housing and semidetached houses built by absentee landlords in the 1890s, is its utility inlets. They are still visible along the pavement on Railway Street, he says, while sipping milky Assam from a teacup decorated with floral patterns. Worth later uses this cup as a prop to explain what it means to be an industrial archaeologist.

“Does it matter if I drop it on the floor?” he asks, holding up the teacup. “Is it old? I don’t know. Or is it made by the thousands up the road?” He tilts the cup to inspect the manufacturer’s mark. “Who owns it? Would they care if I dropped it? If I dropped it, would it be worth repairing?”

Applied to an intimate domestic object, the sort of stuff paraded on Antiques Roadshow, his questions have a warm and familiar logic. Directed at old flour mills, defunct breweries, lapsed cigarette factories and disused power stations, his questions take on an obscure quality. In part, this is because industrial sites of labour – what William Blake once described as “dark satanic mills” – rarely inspire affection.

When they are preserved, as with the former Mariendahl Brewery in Newlands, the country’s oldest brewery and malthouse, the emphasis is usually on architectural form. Worth, though, is not interested in “pretty buildings”.

“Industrial architecture is only one way to look at and understand the field.”

Not that he is entirely comfortable with the term “industrial archaeology” either. His business card prefers the expression “industrial heritage”.

Heritage quandries
But even this phrase is not without its quandaries, as Worth told a group of industrial heritage experts in Cuba in 1998.

“In claiming that our industrial heritage is important, we have to recognise that the complaints about neglect of that heritage are magnified many times by the complaints of those who say that South Africa’s heritage generally does not reflect their cultural values, their heritage or their aspirations.”

The promulgation in 2000 of the South African Heritage Resources Act, and the declaration of Robben Island and Mapungubwe Hill in Limpopo as World Heritage Sites, have, in Worth’s opinion, helped to redress some of the alienation experienced by ordinary South Africans when it comes to heritage.

“However, it remains true that the industrial archaeology of both Cape Town and the wider South Africa is under-researched,” he said in 2004.

An artist’s impression of how the V&A grain silo will be transformed by 2016.

Asked for his most up-to-date reading, he remains only cautiously optimistic. Things have “begun” to shift, he says.

Two recent projects – one a documentary film, the other a research study, both centred on Cape Town’s embattled garment industry – hint at how attitudes towards industrial heritage are shifting.

Cornerstone of a fashion empire
Ilze Wolff, a Cape Town architect, has just completed a long-term research project into the iconic Rex Trueform building on Main Road in Salt River. Designed by architect Max Policansky and opened in 1938, the building was the cornerstone of Bernard Shub and Philip Dibowitz’s fashion empire for many years. Its assiduous detailing of separate amenities also miniaturises the apartheid story.

But Wolff, an energetic champion of architecture as a tangible and lived experience, particularly through her Open House tours, was not simply interested in mapping formal infrastructure for her master’s thesis.

“I grew up with stories of ‘shift work’ and ‘overtime’, as told by my aunts, uncles and grandparents, who all worked in various textile factories in Cape Town, including Rex Trueform,” writes Wolff in her thesis. “The textile industry in Cape Town was the foundation upon which many families like mine constructed a world of middle-class respectability.”

Inspired by Orhan Pamuk’s 2003 autobiographical memoir, Istanbul: Memories and the City, Wolff set out to retrieve some of the stories told by the people who once worked at Rex Trueform before its manufacturing arm was shut in 2005. One particular narrative details how Rex Trueform preferred employing “coloured women with a slim physique, light skin tone and straightened hair”.

This long-standing policy partly explains the origins of the annual Spring Queen pageant, a wildly popular event in which packers and machinists from rival factories in the clothing, textile and leather sectors around the Western Cape vie for the honour of wearing a bejewelled tiara and sash.

No coincidence
It is no coincidence that the pageant’s origins in the mid-1970s coincide with the origins of a broad-based labour movement in the years after the 1973 Durban dockworkers strike. Currently convened by the Southern African Clothing & Textile Workers’ Union, preparations for the annual final at the Good Hope Centre begin after mid-year wage negotiations.

“Pageants are always about the fairy tales, that are fairy tales exactly because they don’t exist – and there is nothing more so than the Spring Queen,” former finance minister Trevor Manuel says in filmmaker Paul Yule’s new documentary, Spring Queen. The film details the dogged persistence of this pageant in spite of the decimation of the industry by cheap imports from the Far East.

Although Worth is not interviewed in the film, he has seen it. The film animates a key point about industrial heritage. Although principally a scientific discipline in which various histories – social, labour, economic, political, architectural and technological – converge, it is also about retrieving poetics from the backbreaking and mundane. A labour pageant is just one example.

Worth is currently devoting himself to finding examples of how ordinary people responded to the sudden emergence in the 1920s of towering cylindrical silos in their landscapes.

“I can’t find a single artistic response to these things arriving in the South African landscape,” he says, his incredulity palpable.

“Someone must have drawn, painted, photographed or written a poem about them. I found nothing.”

And so the archaeologist keeps digging.

The art of being opaque: Why Zeitz should open its books