Eid marked by sorrow in the Gaza Strip 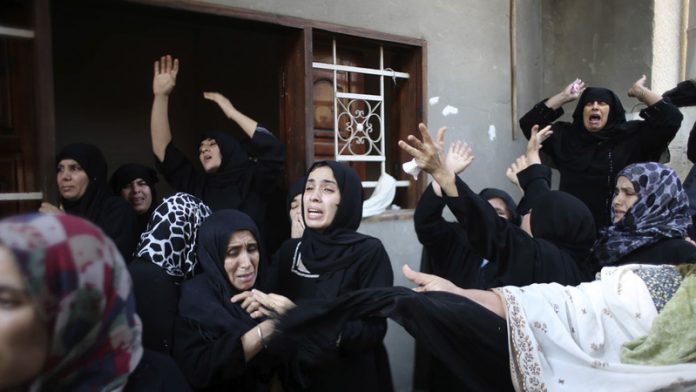 One of the most joyous days in the Muslim calendar, the holiday of Eid al-Fitr was marked on Monday by tears and sorrow in the Gaza Strip, left battered by three weeks of merciless fighting between Israel and Hamas Islamists.

Marking the end of the holy Ramadan month of fasting, Eid is normally a time of feasts and fun, presents and parties, even in this impoverished and isolated Palestinian coastal enclave.

But these are not normal times in Gaza.

“How should a mother feel when she opens her eyes on the day of Eid and does not see her son next to her?” said Abir Shammaly, whose son was killed during heavy Israeli shelling of the Shejaia district in east Gaza last week.

Instead of celebrating with the living, Shammaly sat next to her son’s freshly dug grave, joining many other Gazans who were paying their respects to more than 1 000 people, many of them civilians, who have died so far in the fighting.

Her young daughter silently pushed pink and white flowers into the mound of freshly dug earth.

After three weeks of the fighting, the guns fell largely silent on Monday, with Hamas announcing a 24-hour truce to coincide with Eid. Israel said it would only shoot if fired upon and just the occasional thud and blast broke the calm.

Israel launched its offensive against Gaza on July 8 with the stated aim of halting militant rocket fire out of the enclave and destroying a network of secret tunnels built by Hamas that criss-cross the border area. Some 43 Israeli soldiers have been killed in the fighting and three Israeli civilians have died from Palestinian shelling.

Hamas in turn is demanding an end to the long-running Israeli-Egyptian blockade of Gaza, which has put an economic stranglehold on the territory’s 1.8-million people.

Poison
The conflagration has forced more than 16 7000 Palestinians to seek refugee in the blue-and-white painted schools run by the United Nations agency UNWRA that was set up in 1949 to help Palestinian refugees from Israel’s war of independence.

“This is a holiday of seeing people get martyred, of seeing destruction. What holiday is this? Who has the heart to enjoy the holiday?” said an elderly woman, Um Mustafa Jarbou, tears streaming down her face as she sat on a schoolroom floor.

She came from the northern Gaza town of Beit Lahiya, but, like so many others, had fled ahead of the Israeli advance.

“When we eat food, it tastes like poison. Shame on them. Where is the world? Where is everybody?” she asked, sharing a commonly held view that the outside world, including many fellow Arabs, have turned their back on their plight.

On a normal Eid, the streets of Gaza would be packed with children rushing around showing off crisp new clothes and receiving handfuls of sweets. Celebratory firecrackers would fill the air. On Monday, the roads were largely empty and nerves jangled by countless air strikes could not take fireworks.

When telephones rang, it wasn’t always a relative or friend on the other end passing on Eid greetings.

“Listen Hamas, if you are still alive you should know that if you continue, we will respond, we will respond violently,” said a recorded message received by some residents as part of an Israeli campaign to try to persuade Hamas to stop fighting.

At Gaza’s largest hospital, a group of youths came to distribute sweets to wounded children, whose small bodies bore the angry red scars of war. Efforts to bring some joy to the packed wards floundered.

“I do not know about Eid. Maybe there is an Eid outside. We are all wounded here,” said Inas Ashour (16), who suffered a head injury during shelling in the eastern Gaza suburb of Zeitoun.

Asked if she was happy, five-year-old Aya Al-Namla, thought for a while as she lay on her bed. “Yes, before the bombardment. – Reuters”