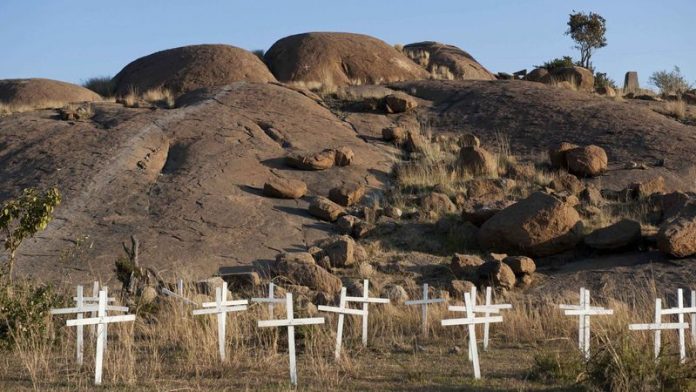 Lonmin can be equally or partly blamed for the majority of deaths at Marikana in August 2012. This is according to Advocate Dali Mpofu, who has accused the mining company of having been involved in a “toxic collusion” with the police.

Mpofu, who represents the injured and arrested miners, put these accusations to Lonmin witness Dirk Botes during his cross-examination at the Farlam Commission of Inquiry on Wednesday.

“We’re going to argue that the Lonmin policy of refusing to speak to the workers was responsible for 41 of those 44 deaths and that the toxic collusion between SAPS [South African Police Service] and Lonmin was responsible for over 39 of the deaths,” Mpofu told Botes, who is a Lonmin security manager.

He added that it was the “ineptitude and wrong decision-making, specifically on the part of Lonmin security” that led to the death of 41 people at Marikana. Mpofu then said he was blaming Botes for his role as the “agent” between the police and Lonmin in relation to the “alleged toxic collusion”.

Earlier in the day, Botes conceded to advocate Anthony Gotz, who represents the Association of Mineworkers and Construction Union (Amcu), that Lonmin security was available to assist the police during their operations at the 2012 strike. Mpofu zoomed in on Botes’s role in the police’s joint operation centre as the liaison between the two organisations.

Botes described how he was responsible for providing the police with the maps and information about access routes and the layout of the land that they needed to plan their operations.

Mpofu then put it to Botes that without his involvement the police’s plan would not have been put into action. Botes disagreed with this. “I think, regardless of Lonmin’s assistance, the police would [have formulated and] executed a plan. Maybe [the plan] would be different,” said Botes.

But he later conceded that the role played by Lonmin in the planning and execution of the plan that resulted in 34 deaths on August 16 2012 was inseparable.

Driving his point further, Mpofu told the witness that “one of the major curiosities of this case is the fact that … you as Lonmin played a more significant role in the planning and execution of the operation than [Major] General [William] Mpembe seems to have played, who was supposed to be the overall commander.”

But Botes insisted that he did not play an integral role, but purely provided information for the police to properly plan their operation.

‘Toxic collusion’
Mpofu pointed out other examples of “toxic collusion” between Lonmin, more particularly Botes, and the police.

He said it was Botes informing the police of a breakaway group of strikers that led to the events of August 13 2012, where police and strikers clashed, resulting in five deaths. Botes said he was obliged to inform the police about the group, because it was an illegal march that had posed a threat to Lonmin’s operations.

According to Mpofu, the “collusion” between the SAPS and Lonmin continued well after the actual events at Marikana. “You were part of this joint operation. You assisted the police in affecting some of the arrests. You kept people [arrested strikers] on your premises, and you were an essential part in the overall operation,” Mpofu told Botes.

But Botes defended all of these accusations, saying that he had been subpoenaed by the police to provide them with information. He added that Lonmin allowed the more than 270 arrested strikers to be temporarily incarcerated on Lonmin property while the police processed their arrests because no police station in the area could hold that number of people.

Botes referred to the breakaway group of strikers, calling them well-organised, militant and with good leadership. He told the commission that Lonmin security was easily able to monitor the larger group at the koppie with surveillance; but that they couldn’t do the same for the smaller, breakaway group and therefore they posed more of a danger.

Mpofu said that given this information, he would argue that the “avalanche of attacks on a group that could be monitored and that was not posing any immediate danger was disproportionate and heinous”. Furthermore, he said that if 80% of the group were in fact innocent citizens who had been intimidated to participate, this was even more reason for the police to be circumspect in their use of force.

Shock at shooting
During his testimony, Botes described the pandemonium in the joint operation centre when the volley of shots fired by police at the miners was heard over the police radio.

He told the commission how he heard the shots just a few seconds after Brigadier Adriaan Calitz shouted the order “engage, engage, engage” over the police radios. “It sounds like automatic fire, but it also sounds like a lot of people firing,” he said.

“We were shocked. I was shocked, and expected that the police were severely attacked and that a number of people were killed both ways … There were a lot of questions, guessing what was happening, who was attacked, who was shot,” said Botes.

He maintained that Major General Charl Annandale had specifically told the police officers not to use live ammunition unless their lives were in danger.