No power, no water, no hope 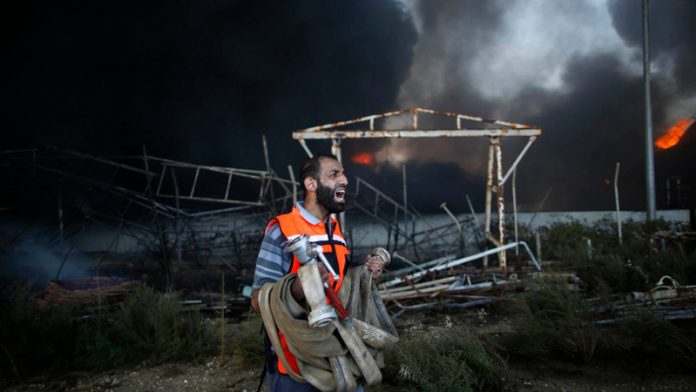 Israel’s attack on the Gaza power plant on Tuesday is likely to fuel speculation that the enclave’s civilian infrastructure is being deliberately targeted in the continuing war against Hamas.

The Israeli army has said previously that it does not target critical nonmilitary facilities, and insisted that it is seeking to destroy terrorist targets such as tunnels and rockets that are fired into Israel. It did not immediately comment on the power station shelling, reportedly by tanks. It was “simply not known” what had happened, one official said.

The scale of Gaza’s humanitarian crisis has alarmed human rights organisations. Last week, Israeli nongovernmental organisations (NGOs) warned that more than half of Gaza’s 1.8-million people were now affected by a lack of adequate access to water and sanitation services, with raw sewage spilling on to the streets from damaged pipes. Hundreds of thousands of Palestinians are without power. Hundreds of thousands more face severe shortages.

Between five and eight of the 10 power lines that bring electricity from Israel have been disabled, some by Hamas rocket fire. Maintenance crews have been unable to reach them for repairs. Refrigeration and hospital services that are close to breaking point will also suffer. Civilian suffering looks set to boost international anger over the crisis.

‘Dahiya doctrine’
If the power station attack was deliberate it may signal the application of the so-called “Dahiya doctrine” – the idea that Israel will use its overwhelming firepower to destroy more than strictly military targets. If accidental, it will likely raise new questions about Israel’s claims to be accurate in its targeting.

The concept is named after the southern suburbs of Beirut, where Hezbollah has its strongholds. The idea is to use disproportionate force to damage civilian property and infrastructure in the hope of undermining popular support for the armed group in control of the area.

In the past, influential Israeli politicians have called for power to Gaza to be shut off.

Ze’ev Elkin, chairperson of the Knesset foreign affairs and defence committee, asked Prime Minister Benjamin Netanyahu about cutting off water and electricity from Israel into the strip. Netanyahu responded that government legal advisers would not permit that. The issue also came before Israel’s high court.

Gaza produces a lot of its own food and staples are allowed in despite the blockade. But shortages are growing as residents try to stock up during lulls in the fighting and farms on the eastern edge of the strip have become inaccessible. Stocks have come under pressure with the end of Ramadan and this week’s Eid holiday. Banks are closed. Cash is in short supply.

Three weeks of combat have also restricted the number of trucks entering Gaza from Israel. According to Gisha, an NGO that monitors access, an average of 81 truckloads have entered Gaza a day compared to 194 a day in June – a 58% decrease. Israel has limited the inflow of types of permitted goods to food, medicine, fuel and humanitarian supplies.

The World Food Programme says more than 115 000 people in Gaza are in urgent need of food assistance.

Looking beyond the immediate crisis, talk has begun about reconstruction. The United Nations has announced a $115-million plan to rebuild homes, schools and hospitals. The cost is certain to continue to rise as long as the fighting rages. – © Guardian News & Media 2014

‘Put farmers at the heart of food systems’ to feed...

The Food and Agriculture Organisation’s QU Dongyu says food systems have to be transformed to make them more resilient and inclusive.
Business

Crematoriums, funeral parlours and cemeteries were forced to close, leaving the families of those who died during the unrest to live with their bodies.
Advertising