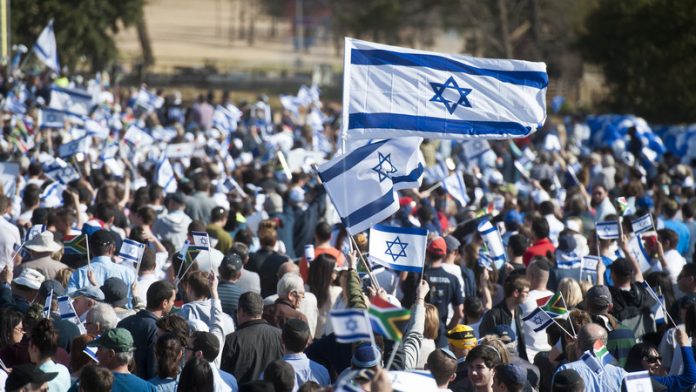 An Israel support rally in Johannesburg on Sunday, organised by the South African Zionist Foundation (SAZF), drew a crowd of well over 10 000 people from across the country. The rally was organised by the SAZF in support of Israel’s fight against what they’ve termed “Hamas terrorism” and to appeal for peace in the region.

Getting access to the event was no mean feat however, with stringent security measures in place and attendees required to show their identity documents and have their photo taken in order to enter.

Chairperson of the SAZF, Avrom Krengel, told the Mail & Guardian that South Africans and South African Jews were “extremely concerned” about what had occurred in Gaza. He expressed his organisation’s full support for Israel, but said he regretted the death of civilians.

Krengel also praised the South African government and encouraged it to continue trying to assist in finding a solution to the conflict. “There needs to be a lasting solution. At the end of the day a two-state solution is the only solution. Everyone who wants peace must just keep trying,” he said.

‘Unprecedented restraint’
Chief rabbi of South Africa Warren Goldstein addressed the crowd, praising Israel for its “restraint” in the fight between the two groups. “A terrorist state goes to war with the only true democracy in the Middle East … and that democracy responds with unprecedented restraint,” he said.

Israel began its air and naval offensive against Gaza on July 8 following what it said was a surge of cross-border rocket salvoes by Hamas and other guerrillas. Israel later also launched ground incursions.

Palestinian officials say 1 775 people, most of them civilians, had been killed in Gaza. Israel had confirmed that 67 soldiers had died in combat, while Palestinian shelling had also killed three civilians in Israel.

Meanwhile, Israel’s ambassador to South Africa, Arthur Lenk, told the masses at the rally that the Palestinians were “our neighbours, not our enemy”. He added that when the conflict ended, Israel should help to rebuild and demilitarise Gaza.

He later told the M&G that he was in favour of co-existence and that the civilians in Gaza were not the target of Israeli attacks. “Israel doesn’t need to be and shouldn’t be condemned,” he said in response to criticism of Israel’s attack on civilians in Gaza.

Lenk praised the turnout at the rally. “I think it’s amazing to see South African and Israeli flags together,” he said. “They’re both democracies … divorced communities who want to live with their neighbours in peace.”

Last month the ANC Youth League in the Western Cape called for Lenk to leave the country amid the unrest in Gaza.

“We call upon ambassador Arthur Lenk to pack his bags and prepare for travel to avoid unnecessary trauma,” provincial convenor Muhammad Khalid Sayed said in a statement.

“We will support our leaders while they take necessary action and recall our ambassador to Israel [Sisa Ngombane] and expel Israeli’s ambassador to South Africa.”

President Jacob Zuma is also on record as saying that Israel should withdraw from the Gaza Strip.

“The Israeli defence force must immediately withdraw from the Gaza Strip and bring to an end the violent and destructive incursions into Palestinian territories,” he said in a speech on July 19.

‘Great deal of emotion’
Mary Kluk, chairperson of the South African Jewish Board of Directors (SAJBD), which supported the rally, expressed her pleasure at the large crowd of supporters.

Asked why South Africans cared so much about the conflict in Gaza, Kluk pointed to the region as being the home of the three most prolific religions on the planet, Judaism, Christianity and Islam. “There’s a great deal of emotion tied up with the land and the heritage of the land,” she said.

Krengel echoed this sentiment. “We [South Africa] are a deeply religious country and we have a connection to the region, an emotional attachment.” He added that there were over 20 000 South Africans living in Israel.

However, Kluk was also quick to condemn the division that the conflict has caused in South Africa and blamed the media for their role in this. “The media is part of provoking that narrative that divides us,” she said. “The SAJBD tries to limit that divisiveness.”

A member of the crowd, Joel Shapiro, also slammed the media for their role and accused the press of not engaging in fair debate on Israel. “We have to support Israel against the international media onslaught against our basic right to defend ourselves. The real enemy is Hamas,” he said emphatically.

Israel not an apartheid state
Talking to the M&G, president of the African Christian Democratic Party, Kenneth Meshoe, summed up why his party attended the rally and what the rally stood for, saying: “We’re here as black people to dispute the lie that Israel is an apartheid state,” he said.

Meshoe condemned Hamas’s call for “annihilation,” stating that Israel had a right to exist within safe and secure borders. He also emphatically maintained that Israel had the right to defend itself and berated those who thought otherwise. “If people throw stones at your house, what will you do?” he asked. “There was more than a week of Hamas firing rockets before Israel fired back,” Meshoe said.

Furthermore, Meshoe called on the international community to instruct Hamas to stop using women and children as human shields.

These sentiments were reflected on the numerous placards held by members of the crowd. While Bishop Nkosi Phakama Shembe and other members of the Shembe church danced on stage the crowd waved posters that read: “Free Gaza from Hamas,” “Israel we stand with you” and “Israel wants peace, Hamas wants war”.

The SAZF expressed their satisfaction with the number of people who attended the rally. Vice chairperson of the organisation Ben Swartz called it an “unprecedented gathering”. “Never before in South Africa have there been so many people in solidarity with Israel,” he added.

Meanwhile, outside on the pavement, stood a small group of protesters. The group of less than 20 people were opposing Israel’s “war on civilians”. Their protest, which was organised by Jewish Voices for a Just Peace (JVJP), was joined by a small group of EFF supporters. Nailed to a nearby tree was a baby’s vest with “Israel don’t kill me” written on the front.

JVJP spokesperson Rina King has been disowned by her family for the stance that she has taken. She told the M&G that many Jewish people felt the same way she did, but were afraid of repercussions from the community. “Joburg Jews do not support what Israel is doing,” she said determinedly. “We are outraged and devastated at the loss of lives.”

‘Blind support’ of Israel
King described the Israel rally as “blind support” of Israel. “We oppose Israel’s use of violence on civilians,” she said. “It’s been shown not to be useful. It has the military might to choose between negotiations and war.”

King criticised the framing of the war as a war between equal sides. “The rockets are coming from Gaza because Gaza’s under siege, it’s been under occupation,” she maintained.

Although the JVJP protest did not seem to affect the SAZF, Kluk took offense to the JVJP framing their rally as being in support of the killing of women and children.

King’s response was that “to support Israel in this war is to kill women and children”. She added that 80% of the deaths were civilian deaths. “It’s quite clear that that’s what [is] happening.”

A delegation from Palestinian groups, including militant organisations Hamas and Islamic Jihad, met in Cairo on Sunday for indirect ceasefire talks with Israel to be conducted through Egyptian officials, Egyptian and Palestinian sources said.

Truce talks would include Hamas’s demand that Egypt ease movement across its border with blockaded Gaza. Israel said on Saturday it would not send envoys as scheduled, accusing Palestinian Islamists of misleading international mediators.