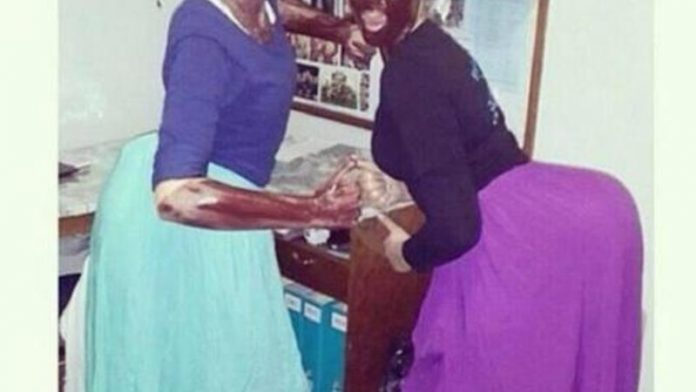 “After a preliminary investigation involving the students concerned, the [University of Pretoria] deemed it appropriate to deal with the matter in terms of the Student Disciplinary Code and Procedure and decided to suspend the students from their residences temporarily, pending a full disciplinary investigation,” Registrar Professor NJ Grove said in a statement distributed to staff.

UP spokesperson Nicolize Mulder said earlier in the week that the students were expelled from their residences.

“They were expelled from the residence but not from university,” she said.

On Friday, Grove said the university would deal with the matter in a fair and impartial manner with due observance of the interests of all the parties involved.

“From this follows that the students involved have as yet not been found guilty of any misconduct, nor have they been excluded from participating fully in their academic programmes,” he said.

Investigation launched
The picture that was distributed on social media shows the pair of female students in domestic worker outfits with black paint smeared on their faces and arms. They pose with headscarves and padded bottoms. It was published in various newspapers this week.

The students’ action was considered racist by many people commenting on social networks with the hashtag #blackface.

Mulder declined to provide information on what the two were studying, or their ages.

She said the picture was taken at a private 21st birthday party but because they were students at the institution, an investigation was launched.

Mulder said the university would not tolerate any form of discrimination or racism, adding that their behaviour was “completely unacceptable”.

The South African Human Rights Commission on Thursday launched an investigation into the matter.

“While the commission has still not received a complaint in this regard, the commission decided to launch an own initiative investigation,” spokesperson Isaac Mangena told Sapa.

‘No confidence’
He said the commission would be interested in the measures to be implemented by the university to address the matter and its significance to other learners at a broader level.

“We will seek a full report of the disciplinary process as part of our investigation.”

The South African Students Congress (Sasco) said it felt particularly angered by the picture and accused white people and the university of teaching its youth to disrespect black people.

“It is clear to us that the white community assisted by institutions of white privilege, like UP, are teaching white youth to disrespect and poke fun at black suffering,” Sasco president Ntuthuko Makhombothi said on Wednesday.

“We have absolutely no confidence in the supposed disciplinary action the university seeks to institute against their precious white students.”

Makhombothi said the picture was distasteful and “racist to the extreme”.