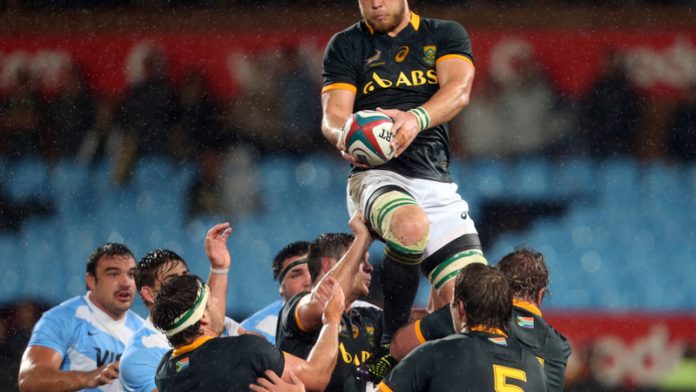 An almost unprecedented Highveld shower for the middle of August descended on Loftus Versfeld and played a major part in the overall quality of the spectacle.

The humid Pretoria air should have been an early warning that the capital city would experience a rare winter shower.

An hour before kick-off the rainclouds gathered and grew darker approaching the start and as the sides sang the anthems the rain bucketed down.

However, the unexpected inclement weather seemed to have little influence on South Africa as the side pounced from the first kick of the ball.

Receiving the ball from the whistle, the Boks took the ball up to where it went to the blindside to Cornal Hendricks, beating his man before offloading to Ruan Pienaar, who darted from the 22 to scored the try.

Pollard added the two points to ensure the Boks a seven-point lead with only a minute-and-a-half gone on the stadium clock.

From there on, rain proved once again to be the great equaliser as the match unravelled due to a complement of handling errors from both teams as the rain continued unabated throughout the first half.

Attempt at goal
The tourists got onto the scoreboard in the seventh minute courtesy of a penalty conversion by Argentine flyhalf Nicolas Sanchez shortly after Pollard missed with his attempt at goal.

Although the weather was a nuisance to both teams, Argentina seemed to handle the conditions slightly better.

The visitors had South Africa’s number in the scrums, while the lineouts also did not provide much comfort to the hosts.

Pollard returned the lead to seven points in the 16th minute which remained that way for the rest of the half.

South Africa should have gone into the half-time break with a larger advantage after some opportunities went to waste.

Willie le Roux fumbling a chip-and-chase ball five metres from the line, while Pollard knocked the ball with an open tryline.

The home side employed a kicking tactic to counter the wet conditions but they ultimately lacked in execution as the ball placement was poor on most occasions.

Reduced deficit
Argentina closed the gap shortly after the restart with Sanchez, who was a pest on attack as he broke the line a few times, adding a three-pointer to the score to reduced the deficit to four points in the 42nd minute.

At this stage the rain had abated to a trickle and the Boks seem to run the ball instead of kicking the ball into the opposition’s hands.

The final 10 minutes of the encounter developed into a tense arm-wrestle as Argentina chipped away at the Boks’ defences and into their half.

With six minutes left on the clock the visitors earned a penalty and kicked for the line where they set up a lineout five metres from the line.

The Boks managed to get out of jail and managed to avert the second Rugby Championship draw of the day after New Zealand and Australia played to a 12-12 stalemate earlier on Saturday.

Argentina remained undeterred and continued probing and again the visitors came close to scoring when a Steyn clearance kick was charged down before debutant Damian de Allende snatched the ball from the hands of a Argentine player inside the goal area.

Just short of a minute from time Argentina again formed an attacking lineout five metres from the line and launched attack on the line but a handling error brought the match to a dramatic end.

Although the wet weather had an impact on the match, Springbok coach Heyneke Meyer would be anything but satisfied with the performance. – Sapa