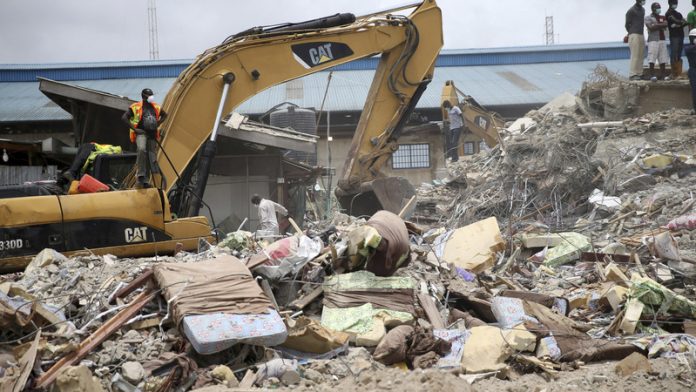 The number of South Africans known to have died in the collapse of a multi-storey megachurch in Lagos last week has risen to 84, Pretoria’s high commissioner to Nigeria said on Friday.

“The number has risen from 67 to 84, with more bodies discovered on Thursday,” Lulu Mnguni told Agence France-Presse.

Some 300 South Africans were said to be visiting the church at the time of the disaster.

The church’s leader, TB Joshua, is one of Nigeria’s most well-known Pentecostal preachers and is referred to by followers across the world as “The Prophet” or “The Man of God”.

He claims to work miracles, including raising people from the dead, healing the sick and foreseeing disasters.

He has yet to comment directly on the deaths and has suggested a low-flying aircraft or Boko Haram militants were to blame for the collapse.

The Lagos state government has ordered urgent structural integrity tests on all buildings in the sprawling Scoan compound, including the main church, which Joshua says was designed by the Holy Spirit.

Pretoria’s diplomats are contending that “Nigeria is obsessed with its competitive attitude towards South Africa”.

“The Nigerians have flatly refused our search and rescue missions, the same way they initially refused international assistance during the search for the missing girls,” said a senior South African government official involved in the mission to bring the bodies of citizens home.

The Mail & Guardian understands through diplomatic sources that 18 South Africans are unaccounted for. Nigerian authorities are disputing the 67 deaths that Zuma announced and the West African nation has continued to refuse Pretoria’s offer to send a search and rescue team.

The missing people could be dead, lying in hospitals or still under the rubble. – AFP, Staff Reporter