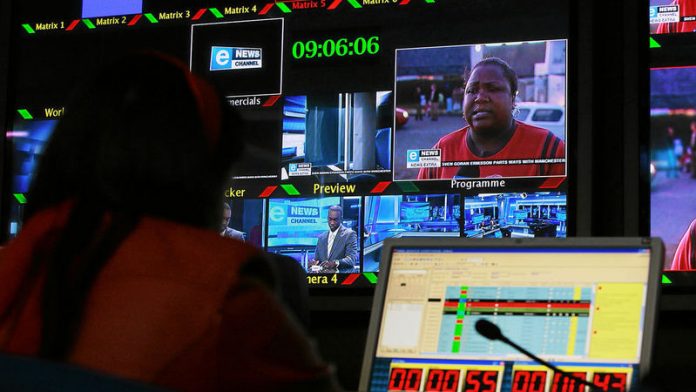 The fallout from the suspension of e.tv chief executive Marcel Golding continued on Wednesday with the resignation of the broadcaster’s chief operating officer Bronwyn Keene-Young, who is married to Golding, and further alarming allegations emerging of attempted political interference in content.

Keene-Young tendered her resignation just a day after co-founder and Hosken Consolidated Investments (HCI) chief executive John Copelyn released a statement to staff in which he said Keene-Young would be part of an executive committee that would run the business.

On Tuesday, much respected former minister of public enterprises Barbara Hogan resigned from the HCI board. She wrote in her resignation letter of a conversation with Yunis Shaik, the brother of Schabir Shaik, during which he said that “Sactwu [Southern African Clothing and Textile Worker’s Union], a significant shareholder in HCI, had lost patience with the editorial practices of e.tv, citing the failure to give prominent coverage to Minister Ebrahim Patel’s economic pronouncements”.

Keene-Young, making use of the same methods as Golding and Copelyn, sent a letter to staff outlining her reasons for resigning.

“Copelyn does not tell you that he told me the line of editorial independence was not one for the news editorial team to determine, nor was it for [subsidiary] Sabido management to determine. That would be determined by the HCI.”

She said earlier in the year that when she resisted “editorial instructions” from Shaik, Copelyn sought her removal from the company. Alleging that it was only after pushback from the executive committee that he agreed to “let me stay on, provided I was sidelined into a new position in which news no longer reported to me”.

Lack of consultation
Copelyn says in a letter released to staff on Tuesday that Golding was removed because of shares he bought without consulting the directors.

“Let me assure you that there was only one reason for Marcel’s suspension: his decision to spend R24-million of shareholders’ money by investing in a supplier retail company with which we do business.”

Golding resigned on Monday after a labour court refused to overturn his suspension by HCI, which has a 63% stake in e.tv.

On Thursday, HCI had said it was suspending Golding pending a disciplinary inquiry into allegations of gross misconduct.

HCI accused Golding of an unauthorised share trade, saying he did not have board approval to acquire shares in technology company Ellies.

Golding said in his affidavit that he was being ousted because he would not bow to pressure to influence e.tv’s editorial independence, claims the Labour Court ruling said were serious and credible.

HCI has stakes in businesses including gaming and leisure, media and broadcasting, transport, energy and property.

Keene-Young wrote in her letter: “Copelyn doesn’t tell you that he has told our executive committee that eNCA’s news coverage is ‘problematic’ for HCI’s other interests and that our news had to be reined in so that it didn’t affect HCI’s ability to source gambling licences from government.”