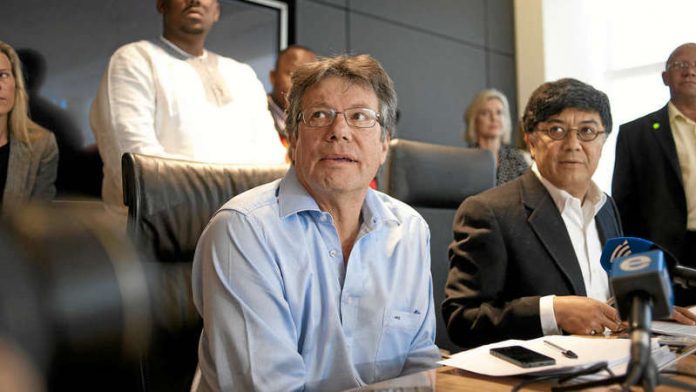 The Shaik brothers have a candid way of expressing themselves. Back in 2004, during the trial of Schabir Shaik, we heard from his personal assistant, Bianca Singh, how he complained of being at the beck and call of politicians.

Singh told the court that Schabir had said caustically that he “has to carry a jar of Vaseline because he gets fucked all the time but that’s okay because he gets what he wants and they get want they want”.

A clanging echo of that sentiment has now emerged from the fallout over the battle at Hosken Consolidated Investments (HCI), which ultimately controls e.tv, the only free-to-air alternative to the state-controlled SABC.

The fight between Johnny Copelyn and former close business partner Marcel Golding – the two driving forces behind HCI – has exposed some telling private communication through Golding’s court bid to stop HCI from disciplining him.

Golding, who resigned on Monday when the Labour Court ruled against him, revealed a variety of embarrassing missives from Yunis Shaik, Schabir’s younger brother and, since March, an executive director at HCI.They included one gem in which Yunis contrasted Golding’s success with his struggles, telling Golding: “I work for a living sucking dick.”

Amid the uproar this week about Yunis’s characteristically ham-fisted efforts to influence some of e.tv’s news coverage, sight was lost of which members Yunis was employed to service for HCI and, crucially, why.

The fact that Yunis intervened at e.tv to try to get better coverage for government as part of a lobbying campaign on behalf of HCI was made explicit in a telling exchange between Yunis and Bronwyn Keene-Young. The latter, who resigned this week, is Golding’s spouse and was e.tv’s chief operating officer.

Damning email
On March 24 Yunis addressed an email to Keene-Young: “I got a call from [Economic Development Minister Ebrahim] Patel today. He says that President [Jacob] Zuma this day opened a new dam. The building of dams is a big issue and has big impact on our country for supply of water etc. He wants for us to cover it tonight. They have sent us the feed and want for us to use it. As this a big story, it might be a good lead story of the day. Please raise with news desk.”

This prompted an email from Keene-Young on March 24 in which she rejected such interference, noting: “Management is there to run the business and deliver the best results … If shareholders are allowed to make direct requests to line managers, then it puts managers in a position where they are second-guessing themselves. The whole issue of news and news integrity is a sensitive and fragile one – one that we work incredibly hard at. It would be good to discuss this in more detail at some point but for now I’d just appeal to you never to make this kind of request directly to our managers.”

Some of Yunis’s frustration boiled over. On March 26 he wrote back: “The fact that Ebrahim comes knocking on my door arises from the undertaking you and Marcel had given him with regard to coverage of the infrastructure programme.

“To remind you, you had undertaken to give due coverage to infrastructure programmes that is [sic] being unveiled by the government in the evening news. In the words of Marcel: ‘we will cover the story in the evening news bulletin.’ In addition to that, e.tv would do short stories and other paid-for advertising.”

What Yunis makes clear in the email is that Keene-Young’s lack of co-operation was frustrating his efforts to lobby government on behalf of HCI. “The undertaking to give more attention to the news was also to the president and other ministers as part of our lobbying for support on the STB programme. These ministers do complain and bitterly so, that we do not cover the work of government with any degree of sufficiency …

“I am fielded to go out and secure, so as to promote your best interests, a particular form of public policy that requires the unanimous support of Cabinet and the presidency, in the face of steadfast resistance by just about everyone that matters, and all the while expend every bit of personal political capital built and stored over decades, only to suffer what is nothing more than a temper tantrum is truly disappointing.”

“STB” is the electronic elephant in the room – it refers to the state’s multibillion rand “set-top box” programme to allow for the migration of television broadcasting from an analogue signal to a digital signal.

Digital  control decision
The “public policy” battle Yunis refers to is the government’s decision on whether that digital signal will be subject to conditional control, either through encryption or some other control system.

Digital – computer code turned into sound and pictures – is far more efficient to broadcast. The same signal bandwidth needed to accommodate one analogue channel can accommodate up to 20 digital channels.

This is important because the usable radio frequency spectrum is limited; going digital can free up much-needed and valuable space for cellular or data transmission. Because most people still have analogue TVs, government is to subsidise millions of set-top boxes that can convert the digital signal into something your old TV can “read”.

But the STB can do something else: it can offer encryption, just like a DSTV decoder, meaning that the STB could be used to offer paid-for services, as well as free-to-air channels such as SABC and e.tv.

Up to now, Multichoice, which owns DSTV (broadcast via a coded satellite signal), has overwhelmingly dominated the pay-TV market.

STBs, with a control or decryption system, would offer a much easier entrance for new competitors, such as e.tv, to offer paid-for services: they could piggyback on a subsidised infrastructure that does not rely on expensive satellite broadcasting.

Multichoice, owned by the giant Naspers conglomerate, has lobbied furiously against this option. As part of that strategy, the company has accumulated some powerful allies, notably at the SABC.

In a confidential deal signed on July 3 2013 by SABC’s then acting chief operating officer Hlaudi Motsoeneng and backed by then acting board chair Ellen Tshabalala, Multichoice offered to host and fund two digital satellite channels.

In turn the contract prohibits the public broadcaster from making any of its channels available on any platform that uses access controls.

Close allies
Both Motsoeneng and Tshabalala are regarded as close to Zuma. This all seemed like a powerful obstacle to e.tv’s ambitions.

No wonder then that in August 2013 e.tv’s holding company contracted Yunis Shaik Attorneys to perform consultancy services, including what it euphemistically terms “advice on its business strategy in relation to government”.

Shaik is clearly more honest about the amount of sucking-up that taking on the Naspers behemoth would entail: hence his eagerness to be of assistance to Patel, another old comrade from the South African Clothing and Textile Workers Union, of which Copelyn was a leader for 20 years.

Keene-Young clearly understands what he is getting at. In the final email in the series disclosed in court she bridles: “You refer to undertakings made by Marcel and myself to Ebrahim Patel. I can only assume you are referring to the Sunday meeting at our house where we discussed the infrastructure programme …

“For the record, we are not trading the integrity of our news for STB control. That was never on the table and I find it alarming that you could even suggest that. What we have undertaken to do is to improve our coverage of government particularly infrastructure projects – and we did that in the clearly defined parameters of the written agreement between ourselves and the [department of economic development] which we have complied with to the letter.”

A look at the programmes in question on the department’s website suggests the lady protests too much. Viewers are taken on a tour of government’s infrastructure rollout, from the Medupi and Kusile power plant developments to the port of Saldanha, and Patel himself is interviewed to explain the importance of the projects.

A lack of serious journalistic interrogation and an anodyne tone sympathetic to government are among its key features. None of the news pieces are flagged as advertorial.

For all that, e.tv’s efforts have experienced serious headwinds. A sympathetic minister, Yunus Carrim, was swept away in Zuma’s post-election reshuffle.

Another minister who has come down on the side of STB control, Siyabonga Cwele – and therefore in favour of e.tv – has been repeatedly blocked by a brash young upstart, Communications Minister Faith Muthambi, and a new ministry of communications that has divided the portfolio.

The chaotic process of delay and obstruction Zuma has allowed to unfold in his Cabinet has technocrats tearing their hair out.

They might be forgiven for thinking it all comes down to one thing: Ellen sucks better than Yunis.

HCI split leaves future of e.tv in the balance