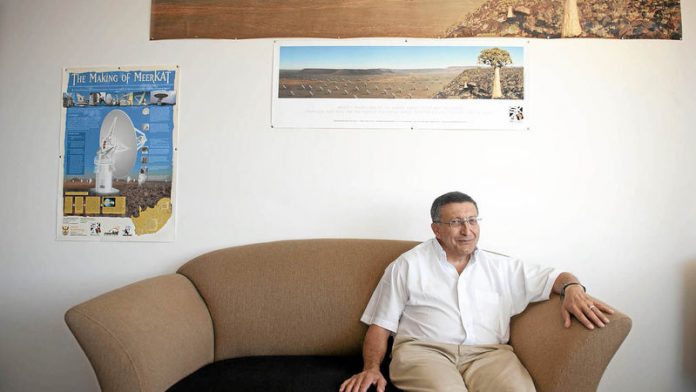 Searching African Skies
By the sounds of it, South Africa stumbled into bidding to host the largest radio telescope in the world.

Everyone will tell you that the SKA bid only started to take shape when Fanaroff joined the project office. “The big watershed, when we got seriously involved in the site bid … was when Bernie was brought on board,” Professor Justin Jonas, associate director for science and engineering at SKA SA, says.

There are many things people don’t know about Fanaroff, like the fact that he, with his colleague from Cambridge, Julia Riley, published an article differentiating radio galaxies into two types, based on their shape. These are called Fanaroff-Riley galaxies, Type I and II, and that paper is one of the most cited in radio astronomy.

After having studied at the University of the Witwatersrand, Fanaroff completed his doctorate in astrophysics at Cambridge and returned to South Africa.

Although he worked as a junior lecturer in physics at Wits and started a research programme at HartRAO upon his return, he soon gave this up to join trade unions in the fight for democracy.

But you would only know that if someone else told you, because Fanaroff never talks about himself. If you try to broach the subject, he answers with a monosyllable and you can feel the silence fill the space between you. His work in the presidency under Nelson Mandela has made him an expert at evading questions while being polite and diplomatic.

Decision-makers know about him
Whenever Dr Khotso Mokhele – who was head of the National Research Foundation when the idea of South Africa bidding to host the SKA was first mooted – comments on Fanaroff, his stock phrase is: “He is very polite.”

Dr George Nicolson, the grandfather of South African radio astronomy, describes him as “self-effacing”. “He plays his cards very close to his chest, and he will never openly come out with things he doesn’t really want to broach.”

So getting him to talk about himself is nigh impossible. However, one thing everyone agrees on is that he was the natural choice to head South Africa’s SKA bid.

Piecing different people’s versions of the story together, co-opting Fanaroff into the project went something like this: everyone in the science community knew, or at least knew of, Fanaroff.

He had been director general in the presidency, was head of the office for the Reconstruction and Development Project (RDP) and the deputy director general of the Department of Safety and Security. With a CV like that, it would be difficult for decision-makers not to know about him.

So when Dr Rob Adam – who was then director general of the department of science and technology and will now replace Fanaroff as director of the SKA SA project office – and Mokhele, as head of the National Research Foundation, cast their eyes about for a possible candidate, Fanaroff was “an absolute natural”, Mokhele says.

He was an astrophysicist by training, but also had management experience and impressive political credentials.

Buy-in credentials
The importance of political credentials, although an issue often skirted over by most of the people interviewed, should not be undervalued.

For a project like the SKA, you need complete political buy-in, which means that someone has to be able to explain the importance and relevance of such a project to the reigning powers.

Radio astronomy, and the highly specialised scientific equipment involving collaboration with developed countries, radiates elitism, rather than a pragmatic way to improve skills in the country.

But 19 years working in a trade union, at a time when – euphemism warning – leftist leanings made your life very difficult in South Africa, and subsequent work in building a fledgling democracy, dilutes this impression.

So combined with Fanaroff’s astronomy expertise and management experience, his ability to sell the project as something necessary and relevant to modern South Africa, with its myriad problems, cannot be underestimated.

Not that he ever plays the “Africa is poor and needs help” card. As he says: “There’s a dual message: that Africa requires the skills and capacity to become a major economic growth story, but also that it’s seen as the next great business destination.”

He emphasises that you have to have people who can absorb the technology that the global economy wants to sell to Africa.

Fanaroff was offered the position of project director in November 2002, and took office in January 2003. “Rob [Adam] wanted somebody who had some astronomy knowledge, but also had some knowledge of management and project management. That’s why they asked me to do it,” he says.

Edited excerpt from Wild’s Searching African Skies: the Square Kilometre Array and South Africa’s Quest to Hear the Songs of the Stars, published by Jacana Media in 2012.