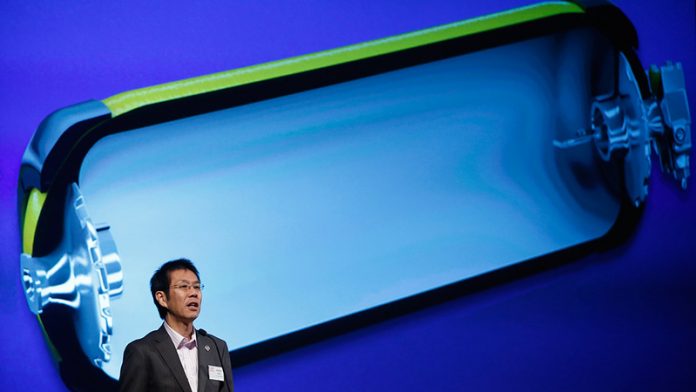 Toyota will introduce its first mass-market fuel cell car next month, hoping to replicate the success of its Prius hybrid with a vehicle that runs on hydrogen instead of gasoline.

The four-seater sedan, named Mirai, the Japanese word for “future”, will first go on sale in four cities in Japan on December 15 2014. Sales in the United States and Europe will follow in the fourth quarter of 2015, the world’s biggest automaker said, unveiling the car simultaneously in California and Tokyo.

The ultimate “green car”, fuel cell vehicles (FCVs) run on electricity made by mixing hydrogen fuel and oxygen in the air – a technology first used in the Apollo moon project in the 1960s. Its only by-product is heat and water – water so pure the Apollo astronauts drank it.

In the Mirai’s case, the gas is stored in two tanks mounted underneath the vehicle. They emit no exhaust, though fossil fuels are used in the production of hydrogen and to pressurise it. Both Honda and Hyundai are also experimenting with limited sales and leases of fuel cell cars.

Besides the relatively high cost, buyers will have to contend with finding fuel. Only a few dozen hydrogen filling stations have been built worldwide, though governments are subsidising the construction of more.

It’s an uncertain future that depends both on whether makers can bring down the price, and a wide-enough network of filling stations is built. Yoshikazu Tanaka, deputy chief engineer for Toyota’s next-generation vehicle development, said he expects it will take 10 to 20 years for the Mirai to reach sales in the tens of thousands of vehicles a year.

Chicken and egg situation
Asked if it’s a risk, he said yes, but Toyota views it as a challenge. Likening it to a chicken and egg situation, he said if you say it’s too risky and don’t move forward with production, the number of filling stations will never grow. Toyota faced a similar scenario with its gasoline-electric hybrid, the Prius, which now sells in big numbers.

“It was a big challenge when we first introduced the Prius, or hybrid car, in 1997,” he said in an interview in Tokyo. “And it’s an even bigger challenge this time because there is no infrastructure, and we’re trying to lead” the commercialisation of fuel cell cars.

“This technology is going to change our world,” Toyota managing officer Satoshi Ogiso said at the launch in Newport Beach.

Mirai will cost 6.7-million yen ($57 460) before taxes in Japan, which on Tuesday announced a subsidy of 2.02-million yen on FCV purchases.

Toyota aims to sell just 700 globally next year, mainly due to a dearth of hydrogen fuel stations, executives said. It expects cumulative US sales to reach 3 000 by the end of 2017.

Toyota chairperson Takeshi Uchiyamada, who led development of the first-generation Prius, said he expected global sales to rise to “tens of thousands” in the 2020s.

Honda a contender
A day earlier, Honda unveiled a pre-production version of its first mass-market FCV in Tokyo but stopped short of giving a price or sales target.

Honda, which with Toyota launched the world’s first road-ready FCVs in December 2002, pushed back its estimated sales start in Japan to the year ending in March 2016 from the original 2015, citing overall delays in vehicle development due to quality problems. It now expects US sales to start no earlier than March 2016.

Honda’s yet-to-be named fuel cell sedan seats five and has a range of over 700km, while Mirai can go 650km on a full tank under Japanese standards. – Reuters, Sapa-AP