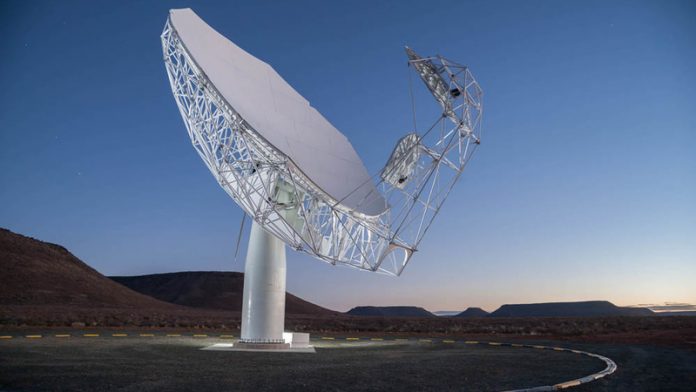 Germany’s Max-Planck Institute for Radio Astronomy is to commit R150-million to the construction and installation of radio receivers on South Africa’s MeerKAT radio telescope, Square Kilometre Array (SKA), it was announced on Tuesday.

The 64-dish MeerKAT, expected to be complete in 2017, will form part of the SKA, which will be the largest radio telescope in the world. The R2-billion MeerKAT is a South African-funded and designed telescope, with 75% of the components sourced locally, and will be the most sensitive radio telescope of its kind in the Southern Hemisphere.

About five years of observing time on the telescope have already been allocated to more than 500 radio astronomers, 85 of them from Africa.  Celestial objects produce radio waves, and by picking up on these signals radio astronomers are able to “see” what the universe looks like.

Radio telescopes have a number of receivers, each of which focuses on a different part of the radio wave spectrum.

The receivers to be funded by the institute will be primarily for “research on pulsars, [which are] rapidly spinning neutron stars which emit very regular radio pulses and can be used as highly accurate clocks to test extreme physics”, it said.

Investment a ‘vote of confidence’
“We consider MeerKAT to be an important undertaking as it is not only a pre-eminent astronomy project, but also a light-house project for science in Africa in general. The [Max-Plank Institute] is very pleased to enable close collaboration between its scientists and the South African community and looks forward to see MeerKAT’s first glimpse of the universe with the receivers of the [institute],” the institute’s president Martin Stratmann said.

Science and Technology Minister Naledi Pandor said: “This significant investment by a leading global research organisation of prestigious repute, home to several Nobel Prize winners, [is] an important vote of confidence, in South African science in general and the MeerKAT specifically.”