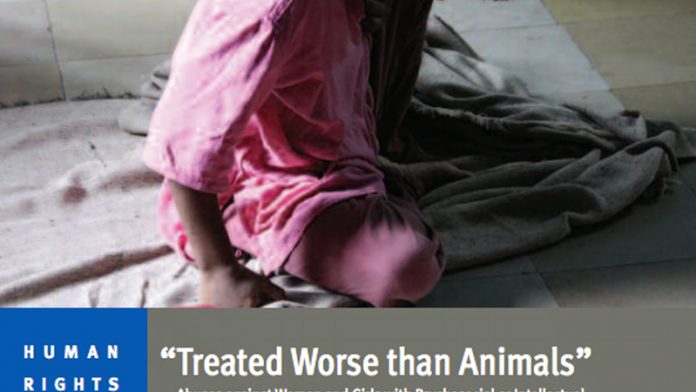 The report by a human rights group said that intellectually disabled women in India are routinely locked up in institutions where they suffer sexual or other abuse.

“Once they’re locked up, their lives are often rife with isolation, fear and abuse, with no hope of escape,” said Kriti Sharma, the report’s author.

“Women and girls with disabilities face unique challenges – including sexual violence and denial of access to reproductive health – that men do not.”

Called “Treated Worse than Animals”, the report is based on interviews with 52 women and girls who were or had been in institutions, along with those of 150 doctors and family members.

“The house aunty (staff member) who drops me to school hits me. She hits me here (in the institution) too. She slaps me hard with her hand,” an 11-year-old said in the report.

Treatment is ‘unbearable’
Government census figures show some 1.5-million of India’s population suffers from intellectual disabilities such as genetic Down’s syndrome, while another 722 826 suffer from mental illnesses such as bipolar disorder.

But experts say those figures are strikingly low for the world’s second most populous country, where many health issues go undiagnosed.

Vilas Bhailume, superintendent of a mental hospital in western Pune, said overcrowding was a major problem. “We only have 100 toilets for more than 1 850 patients, out of which only 25 are functional. The others keep getting blocked. Open defecation is the norm,” he said in the report.

Women with a range of disabilities and illnesses, such as schizophrenia, are often admitted against their will by their families or legal guardians, despite the fact that forced institutionalisation is illegal in India.

“Relatives just dump patients at the hospital and think that’s it. They put fake addresses and phone numbers on the registration forms so we cannot contact them again,” a nurse at the Pune hospital said.

India’s government launched a national mental health programme in 1982 to provide community-based services, but HRW says it is largely ineffective and lacks oversight.

Sharma said many of the women she interviewed were desperate to leave, describing their treatment as unbearable. “Long-term warehousing of women and girls with disabilities is simply not the answer,” she said. – AFP