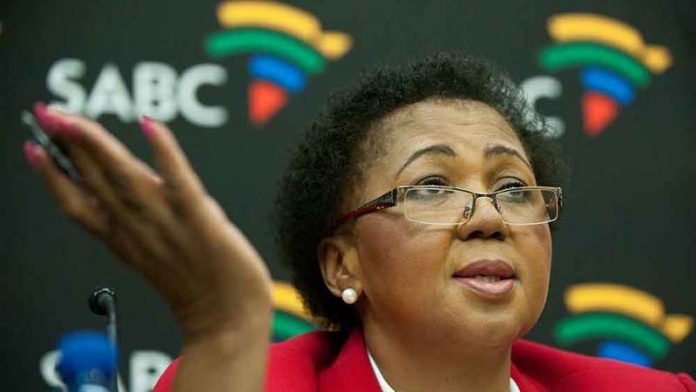 Embattled SABC board chairperson, Ellen Tshabalala, has cried foul over Parliament’s portfolio committee on communications inquiry that found her guilty on two charges, claiming it could be a political agenda and said she would not resign.

She now claims that “elements within the alliance” were hell bent to purge and vilify her. “I am not willing to resign because I did nothing wrong.”

This week the committee found her guilty of lying to Parliament and of misconduct for lying about having a degree.

Business interest
In a press conference at the SABC’s headquarters in Auckland Park, Tshabalala cited a “business interest” to be the reason why there was a “campaign to get rid of me”.

Tshabalala believes her troubles started under the former communications minister Yunis Carrim who was “dictating how to run the SABC” and “pushing a deal, which would paralyse the SABC”. She wouldn’t elaborate what deal it was only saying she would reveal it all at a court appeal she is expected to launch soon.

The Mail & Guardian could not reach Carrim for comment.

Unisa results ‘not mine’
Tshabalala would not say if “elements within alliance”, who she claimed had vested interest in the SABC, was the South African Communist Party (SACP), but she hinted to it numerous times in the press conference.

“The talk was that the new portfolio committee is coming to deal with me and Hlaudi [Motsoeneng],” she said.

Tshabalala insisted that she qualified from Unisa in 1996 and that her results presented to Parliament was not hers. “It was somebody else’s results. It is not mine,” she said.

Tshabalala said that she was prejudiced by the committee who conducted the inquiry in her absence. She further said it did not have the authority to recommend her suspension.