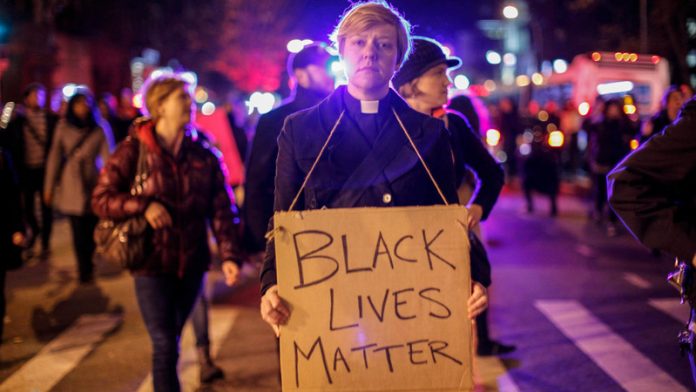 A song poking fun at the killing of black teenager Michael Brown by a white policeman, performed at a retired officer’s party, has prompted the Los Angeles Police Department to launch an internal investigation, its chief said on Tuesday.

“Michael Brown learned a lesson about a messin’ with a badass policeman,” goes the song, captured on video and posted on entertainment news website TMZ. It continues: “Michael looked like some old Swiss cheese” … his brain “splattered on the floor.”

The video is likely to fuel public anger over police killings of black men. About 200 people marched in New York on Tuesday, defying Mayor Bill de Blasio’s call for protests to be suspended after two police officers were killed in their patrol car on Saturday in an apparent revenge attack.

Late on Tuesday an 18-year-old black man was shot and killed by police in a St. Louis suburb near where unarmed Brown was killed by in August. Police said the man had pointed a handgun at the officer who shot him.

‘Inappropriate’
Commenting on the song, Chief Charlie Beck said on Twitter: “Like many of you, I find it offensive & absurd. It does not reflect the values of the #LAPD.”

“I have directed our Professional Standards Bureau to look into this & determine if any active department employees were involved.”

The song, which changed the lyrics to Bad, Bad Leroy Brown, a 1973 hit by American folk rock singer Jim Croce, was performed at a party organised by a retired LAPD officer at an Elks Lodge in the Los Angeles suburb Glendale on December 15, local media reported.

A trustee for the lodge, in a statement to LA Weekly, apologised for the song, which he called inappropriate and said does not reflect the group’s values.

A lawyer for the singer, identified as Gary Fishell, a former private investigator, is quoted by TMZ as saying: “He’s a goofball who writes funny songs,” adding that he had now realized the song was “off color and in poor taste.” – Reuters

Although Africans must continue to support the Black Lives Matter movement, there is also the need for them to raise their voices against injustices in other African countries
Read more
Advertising
Continue to the category
Education