World reaches for the stars in SA 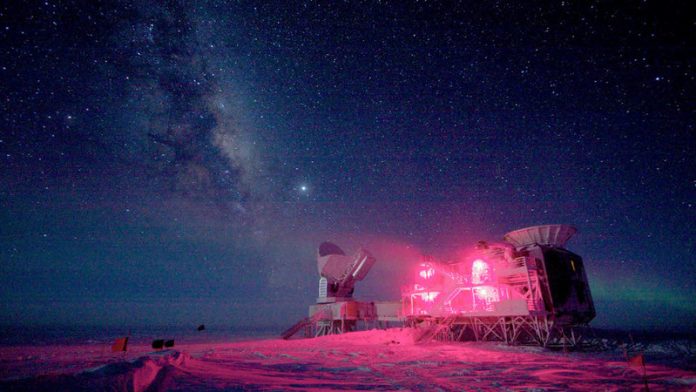 Dust rises from the tyres of a brimming trailer as a bakkie trundles slowly over dry farm roads in the Northern Cape. Antennae and receivers are strapped into the trailer and catch the still hot autumn sun.

The instruments will be used to find the most “radio quiet” site. Inside the cab, members of the Square Kilometre Array (SKA) South Africa project office, including SKA SA associate director for science and engineering Justin Jonas, are searching for the best site in the country for radio astronomy – and there are 25 possibilities on the list, most of them in the Northern Cape with its low rainfall and clear skies.

About 250-million years ago, this region was a large inland sea and travelling through it is like traversing an ocean bed – sandy mountains rise up around you, mottled with seaweed-like shrubs, the only difference being that there is no water in sight.

That was nearly 12 years ago. Today Losberg Farm and its environs (about 120km from Carnarvon) – the place finally selected as the core SKA site, which will be the heart of the world’s largest radio telescope – is home not only to South Africa’s own radio telescopes but also to astronomy experiments from all over the world.

Jonas, a soft-spoken man partial to wearing collared short-sleeve shirts and hiking boots, said that one of the first guests to the site in 2004 was his friend Steve Rawlings, a professor in Oxford University’s astronomy department who died in early 2012. “Steve came on one of the trips, and he said: ‘Build it and they will come. If you start doing this sort of thing, other people will show interest.’ And he was right,” the Rhodes University physics professor said.

“Other people in the world started looking at [the site] and saying, ‘You’ve got a site; we’d like to put down an experiment there.'”

One of the best places
One such experiment, C-Bass South (the C-Band All Sky Survey South), comprising a single dish, 7.6m in diameter, is based at the Klerefontein farmhouse, en route to the SKA site, and involves South African Dr Charles Copley, who, like many scientists, believes that this country is one of the best places to do radio astronomy.

The experiment has a sister telescope (C-Bass North) at the Owens Valley Radio Observatory in California in the United States, and the researchers need both telescopes to sift through the noise of the universe. With one dish in the northern hemisphere and one in the south, scientists are able to see the entire sky.

Celestial objects emit radio signals. Right now you are being bombarded with radio signals from the stars in our galaxy – and radio telescopes pick up these signals, which radio astronomers decode to map, analyse and understand the universe. But the difficulty is that, because these signals are so faint and have to travel light years through the Milky Way galaxy and interstellar dust to reach us on Earth, they have been interfered with along the way.

This is particularly true when scientists try to measure the cosmic microwave background, an almost uniform thermal residual radiation – about 2.7°C – that permeates the universe. This can be explained using the Big Bang theory: all of space was contained in a single point, which exploded outwards. When this incredibly hot primordial soup began to congeal, the first stars began to form, and their light has been travelling for 13-billion years to reach us on Earth. But it is no longer the energetic light we get from our own sun; it has been stretched into microwaves, which is why it is called cosmic microwave background (CMB) radiation.

This radiation is weak and has travelled huge distances through time and space, and researchers need to separate it from the prevailing, much louder signals, closer to home.

Foreground radiation
Copley has been part of the C-Bass team since 2008 and built the C-Bass South receiver – which is the piece of sensitive electronic equipment that “receives” the signals caught by the dish’s parabolic bowl – for his PhD at Oxford University after completing a master’s in physics from Rhodes University.

Known to his friends as “Copper” because of his bright-red hair, and originally from Eshowe in KwaZulu-Natal, Copley says: “Ultimately, we are trying to measure foreground [radiation], mostly the Milky Way at low frequency … [of] about 5GHz,” he says.

Its results complement those of the Planck satellite, the European Space Agency’s space-based observatory, which is tasked with collecting these ancient CMB signals. According to the space agency, “imprinted on [the cosmic microwave radiation background] are traces of the seeds from which the stars and galaxies we can see today eventually formed. Hidden in the pattern of the radiation is a complex story that helps scientists to understand the history of the universe both before and after the CMB was released.”

C-Bass – a collaboration between the universities of Oxford and Manchester in the United Kingdom, the California Institute of Technology in the US, the Hartebeesthoek Radio Astronomy Observatory in South Africa (supported by the SKA SA project), and the King Abdulaziz City for Science and Technology in Saudi Arabia – measures the polarisation signal from our galaxy, which is the extent to which the background radiation is distorted by dust and debris on its journey to us.

There has been a dramatic spike in interest in foreground radiation, following the debacle of the “discovery” of gravitational waves last year. In 1916, in his theory of general relativity, Albert Einstein predicted the existence of gravitational waves, distortions in space and time that – rather than the force of “gravity” – explain the dances of planets, stars and galaxies. It is hypothesised that these ripples running through the universe were caused by the Big Bang.

Single-dish experiment
American astronomers, co-led by Jamie Bock, professor of physics at the California Institute of Technology and laboratory senior research scientist at the Jet Propulsion Laboratory at Nasa, claimed to have detected gravitational waves, through radiation signatures measured on the Background Imaging of Cosmic Extragalactic Polarization 2 (Bicep2) experiment at the South Pole. But recent results from Planck show that the researchers underestimated the quantity of Milky Way dust present in the part of the sky they were observing.

“People have acknowledged that [the Bicep2 results] are probably flawed due to foreground [radiation],” Copley says.

Commissioning on C-Bass South, the dish of which was donated by Telkom, will begin “in earnest” next month, Copley says. But he notes that a single-dish experiment, such as C-Bass South, is slightly more difficult than an array, such as the seven-dish Karoo Array Telescope (KAT-7), which was built as a prototype to show South Africa’s engineering capabilities in its bid to host the SKA. “If anything goes wrong, you’re not collecting data. If KAT-7 loses an antenna, you can work around it.”

But these sorts of experiments are very different from facilities, such as South Africa’s 64-dish MeerKAT telescope, which is expected to be completed in 2017 and ultimately form part of phase one of the SKA that will comprise thousands of dishes, Copley says. “This is a traditional science experiment, like Bicep2 … [which are] targeted experiments. They are doing pathfinder work, pushing back the boundaries,” he says.

Facilities, however, have to be more flexible and robust. “The science evolves quickly. If [the Bicep2] results had been real, it would have changed the course of what [science] people are doing. Those events happen and we need to be flexible.”

Observation time
This is happening with the MeerKAT telescope, and SKA SA has formed a science case committee to review the time that has been allocated to scientists. The first five years of observing time have already been allocated, but those allocations may change because the march of scientific discoveries may render some areas of projects redundant. Jonas told the delegates at the SKA SA postgraduate bursary conference in December that the telescope’s first dish, which was erected in April last year, was significantly more sensitive and had greater capabilities than had been expected. “Science has moved on [since MeerKAT’s science case was put forward]. Are our science cases still relevant? We also have more sensitivity and capability than we thought we had.”

Asked which is preferable – an experiment or a facility – Copley says: “I don’t think there is a clear answer … It is easier to make an argument for or create funding proposals for bigger instruments, and to build those instruments in a facility way to create lots of science.

“In the United States, the experiments seem to be better funded … in Europe and South Africa, we’re building more facilities. In the South African context, a facility is a better way of creating a longer-lasting legacy.”

Asked how much C-Bass cost, Copley says “it’s not a very expensive experiment, comparatively”, without giving an exact figure. “The main cost is people time.” Although the C-Bass South group is small at the moment, he says doctoral students are becoming interested in the data analysis. “We will use the data to get PhD students trained, and to get publications out.”

South Africa’s SKA site on Losberg Farm, once a dusty plain in the arid Northern Cape, and home only to sheep and shrubs, is acknowledged as being well on its way to becoming a world-class science facility, with roads, electricity, a buried data bunker (so that the servers to process the data do not interfere with the radio telescopes) and more international science experiments being set up in the vicinity of the country’s own radio telescopes.

“Steve came on one of the trips, and he said: ‘Build it and they will come. If you start doing this sort of thing, other people will show interest.’ And he was right.”